Melissa Holmes and our Channel 2 News cameras were given unique access inside a hearing of Lancaster Drug Court. Heroin addicts who find themselves facing jail time for crimes they've committed, instead are leaving the program clean and sober and with a new lease on life. 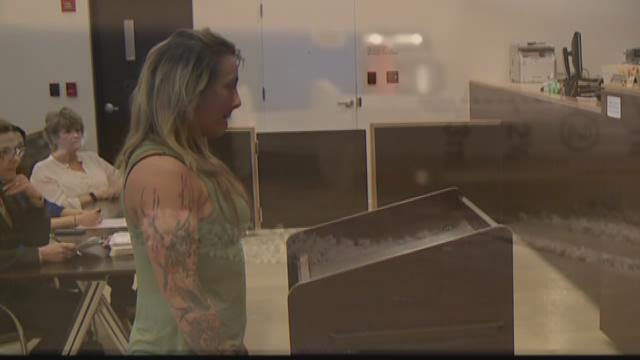 LANCASTER, NY -- As Western New York continues to find itself in the deadly grasp of the heroin and opioid epidemic, 2 On Your Side is digging deeper into ways to fight the problem.

Melissa Holmes and our Channel 2 News cameras were given unique access inside a hearing of the Lancaster Drug Court.

Addicts, who find themselves facing jail time for crimes they've committed, instead are leaving the program clean and sober and with a new lease on life.

Justice Anthony Cervi, who presides over Lancaster Drug Court, says the goal of the treatment program is simple.

"If we can take care of the ills of the offender, we can cure the criminal activity so to speak," he said.
Judge Cervi estimates of his 30 current cases, almost all involve an addiction to heroin or opioids.

"Many people who enter into our program, they're seeking help," said Cervi. "They're desperate to help themselves."

Lancaster Drug Court participants are non-violent offenders who agree to go to addiction counseling 2-3 days per week. They meet with the drug court team and appear before the judge once a week. They have routine and random drug tests. The length of the program is typically a year, although it differs from case to case.

Judge Cervi says 40 percent see it through to the very end and graduate from the program.

"It may seem low, but given what we're up against here, it's a pretty good success rate," said Cervi. "It's not for anyone who's not committed to the recovery. That's for sure."

Shannon Winsor admits she hit rock bottom when she was arrested for shoplifting to support her heroin addiction. She says Lancaster Drug Court set her straight.

"My parents can only do so much. Judge Cervi can do anything and can send me to jail. It's a lot scarier," said Winsor.

And he did send her to jail when she didn't obey his rules. She detoxed in jail and was sent to Renaissance Campus for treatment. Now she's almost one year sober and will soon be graduating from drug court.

"I thought I was going to die an active addiction and I don't have to now. So it's amazing to see how far I've come in the past year," said Winsor.

She is a shining example for other addicts and their families, that there is help, and there is hope.

"I always try to tell the participants it's not the fall that defines you, it's how you rise from the fall that makes you the person that you are," said Cervi.

Cervi said the biggest mistake he sees from parents and loved ones is that they often turn a blind eye, or they support the addiction and become enablers. Cervi says families need to let the addicts face the consequences, because drug court could save their lives.

To see a list of some of the drug court programs in Western New York, click here.