Many bars and restaurants may be wondering whether a judge's ruling on the state's closure curfew impacts them. 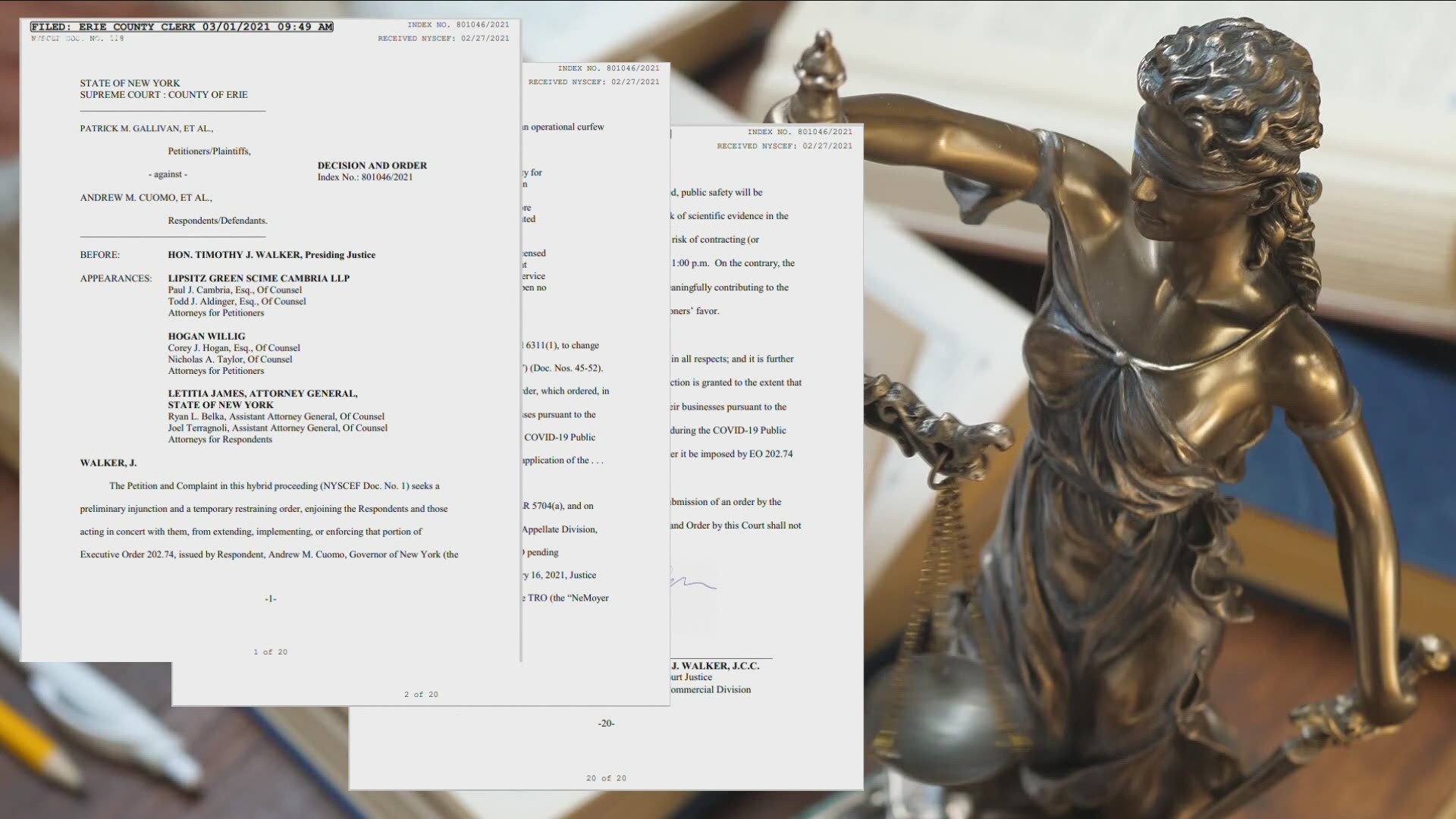 BUFFALO, N.Y. — We're looking into the fallout after a judge's decision to grant dozens of local restaurants and bars a preliminary injunction on the state's closure curfew.

Those establishments were successful over the weekend, when a judge issued his decision in favor of the restaurants and bars.

For the more than 90 restaurants and bars, who were part of the lawsuit, it’s back to normal operating hours once again. This after state Supreme Court Judge Timothy Walker granted them a preliminary injunction, saying they no longer have to follow the closure curfew which Judge Walker called 'irrational.'

"It’s going to be a lot better for all of us, in this business, we’ll be able to do more of our normal type of business, throughout the normal hours that we’ve always done," said John Bona III, owner of Amherst Pizza & Ale House.

"Unfortunately, I think the other restaurants, technically are.  I'm hopeful as our clients are that the state will do something that makes economic sense as well as medical sense to all the curfews to be set aside," said Corey Hogan, an attorney representing the petitioners in the case.

If other establishments break the curfew, they could open themselves up to potential violations from health departments or the state Liquor Authority, Hogan says.

A spokesperson for Governor Andrew Cuomo says the state is reviewing the judge’s decision and all options are being considered.

Attorneys for the establishments say even if the state was to appeal, the appellate courts are backed up now, it would take time to hear the case and with the governor’s emergency powers expiring next month, they’re skeptical about the relevance of an appeal.

"Even if they appealed, it would still take quite sometime to get through the appellate courts," said attorney Paul Cambria, who also represents the petitioners, "his powers to do so are going to be extinguished in April and I don’t think an appellate court could actually reach this case, brief it on the merits, argue it and come with a decision by the time that happened."

Here are some key excerpts from the judge's ruling:

"The explicit references to EO 202.74 contained throughout EO 202.94 clearly show that it is not a new directive, but a modified extension of an existing directive. Accordingly, EO 202.94 is a nullity, because it sought to modify an Executive Order which had expired on December 12, 2020."

"While the Court recognizes that COVID-19 continues to pose a serious health threat to the community at large, the positive and encouraging trends ignored in the Blog Affidavit do not support a Curfew. Rather, they demonstrate that, since the Petitioner Restaurants/Bars (and other non-party restaurants and bars) re-opened on or about January 13, 2021, hospitalization rates have improved."

"The irrationality of the Curfew is further demonstrated by the Governor having permitted as many as 6,772 people to attend the Buffalo Bills playoff game at Bills Stadium in the Town of Orchard Park, on January 3, 2021 (the “Playoff Game”). At that time, Erie County restaurants and bars were shuttered, having not reopened until after January 13, 2020."

"Respondents have failed to demonstrate a nexus between the requirement for the Curfew and a particular time, be it 10:00 p.m., 11:00 p.m., or some other time."

"Respondents contend that, in the event the Curfew is lifted, public safety will be negatively impacted. However, this contention is belied by a lack of scientific evidence in the record showing that restaurant and bar patrons are at an elevated risk of contracting (or spreading) COVID-19 at any time, let alone after 10:00 p.m. or 11:00 p.m."