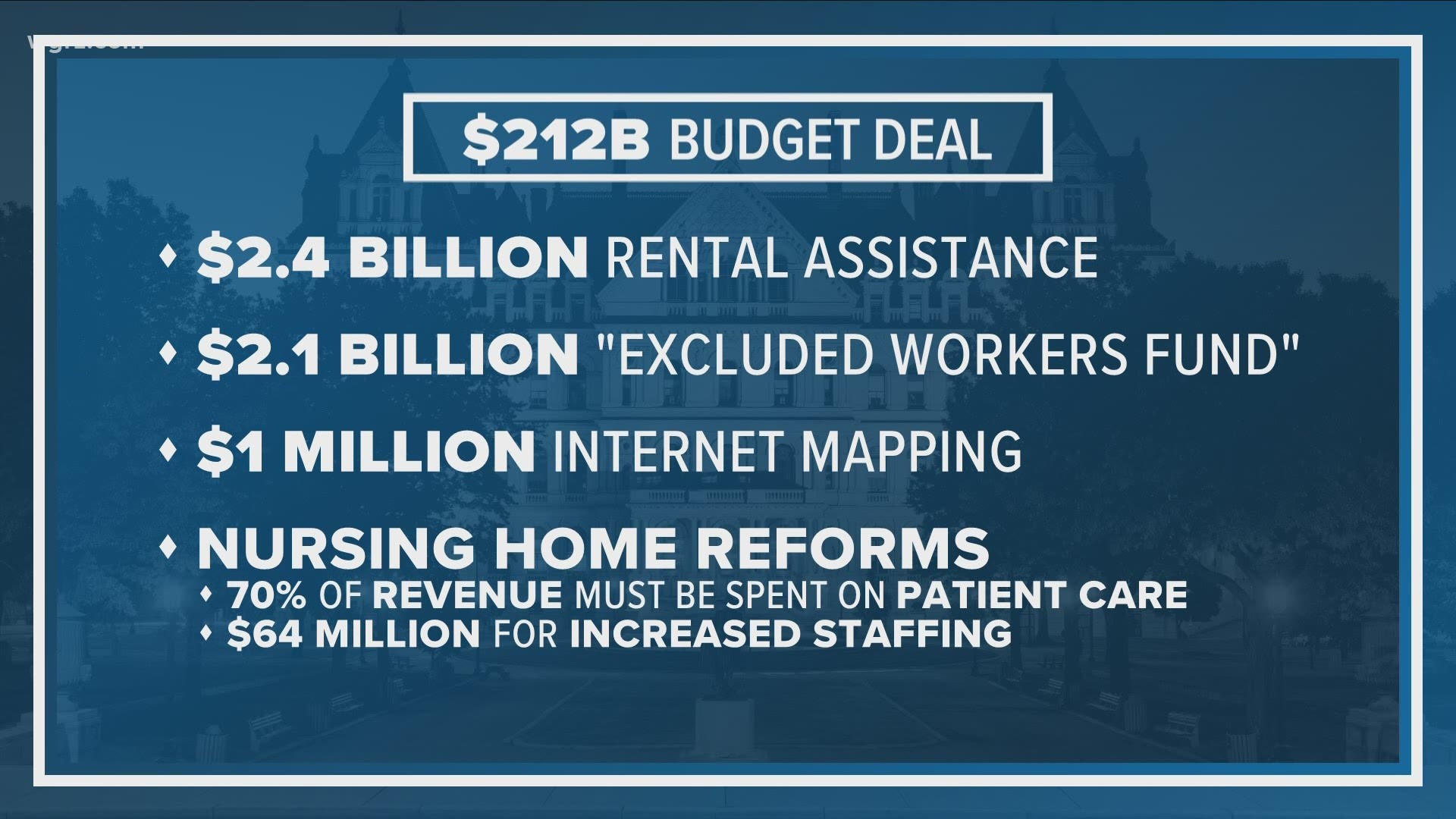 NEW YORK — New York Gov. Andrew Cuomo, along with Senate Majority Leader Andrea Stewart-Cousins and Assembly Speaker Carl Heastie announced Tuesday afternoon that an agreement has been made on the state budget.

The budget, which is late this year, is a record setting spending plan of $212 billion, $35 billion higher than the budget adopted for the fiscal year ending in 2020.

The b udget includes a $4billion tax increase

Lawmakers are expected to meet into Tuesday night to adopt the budget.

According to the governor's office, the following items are included in the final budget:

"The last year has highlighted the disparities in broadband access in our state and throughout our country," Ryan said in a statement. "Internet access has been vital to workers, students, and people seeking medical care during the pandemic. As a result, those without access to reliable high-speed internet have been met with extra obstacles in their daily lives. Getting the Comprehensive Broadband Connectivity Act included in the state budget is a major step toward offering affordable, reliable high-speed internet to all New Yorkers."

"We got over a quarter billion dollars in new transportation funds that are going to go directly into our roads especially our local roads...but more importantly, the larger projects that have been held back because of a lack of funding can be addressed."

Kennedy conceded; however, that big ticket items that have been the focus of much public interest, involving the Skyway, the Scajaquada, Metro Rail, and the Kensington Expressway, are items that will be dependent on passage of President Biden's multi trillion dollar infrastructure plan.

Though there was reportedly a split among majority democrats on the so-called Excluded Workers Fund, that too is included in the budget according to the Governor and legislative leaders.

The controversial proposal will have state taxpayers provide $2 billion in new spending for those who those who entered the country illegally and remain here so, and who due to their immigration status, were not eligible to get federal stimulus checks or unemployment benefits. Monies from the fund would similarly compensate former inmates recently released from state prisons.

Sources tell 2 On Your Side that lawmakers will also adopt a continuing resolution in order for state workers to be paid on time this week.

According to the NYS Comptroller's office some 39,000 state workers were already delayed in getting paid because the budget had not been adopted by Monday, when it was already five days late.