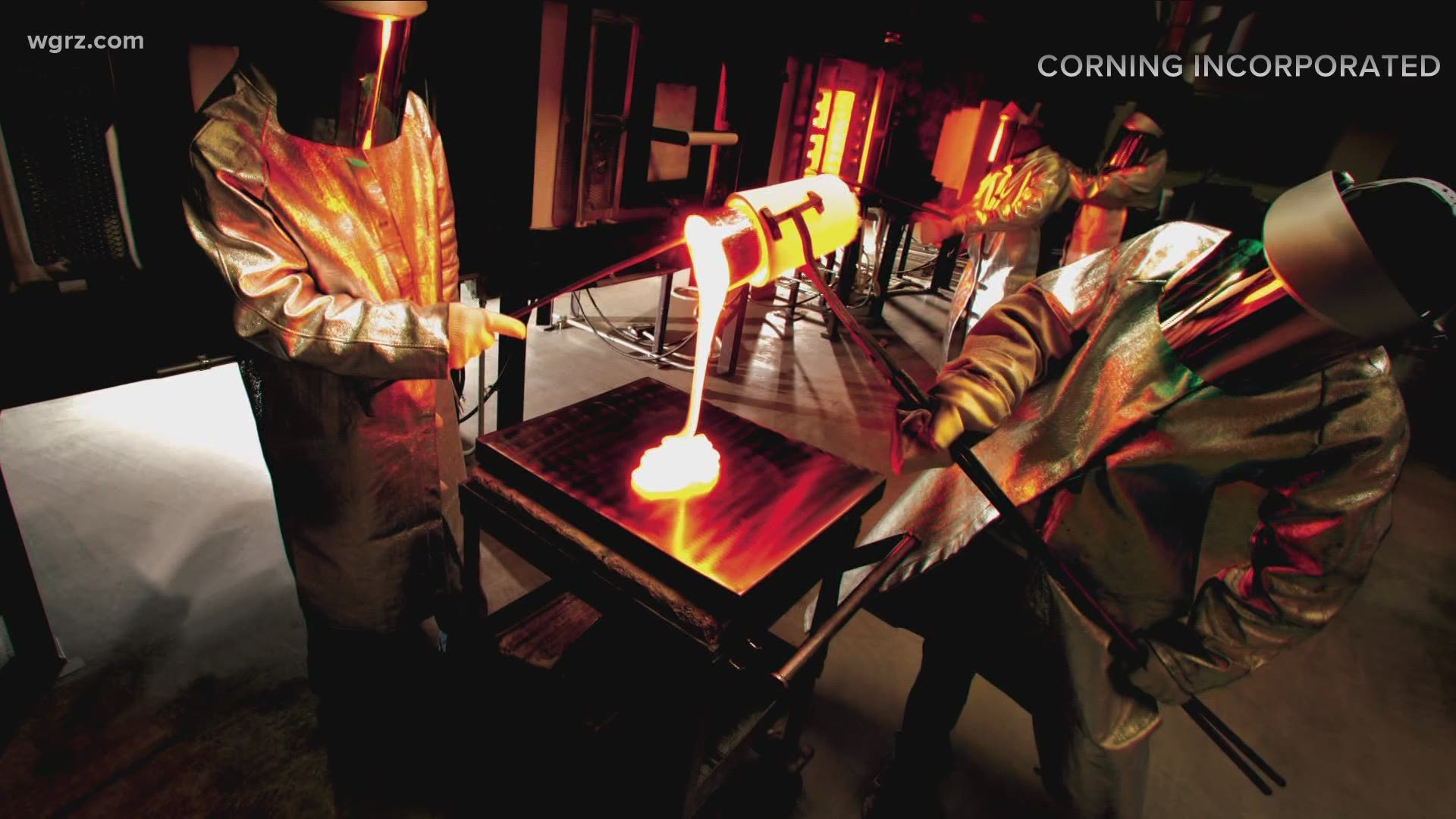 CORNING, N.Y. — When Corning Incorporated developed something called Valor glass a decade ago, the company never imagined it would play such a vital role during a world health crisis.

"It's just interesting that here in a pandemic, attributes that we built into that package are necessary to deliver that dose safely," said Rob Schaut, scientific director for Corning Pharmaceutical Technologies. "Certainly when we started looking at ways of improving packaging quality back in 2010 or 2011, we didn't anticipate that a pandemic would happen in 2020 or 2021."

Ten years ago, there were concerns over glass packaging, more specifically an FDA advisory about something called glass delamination, according to Schaut.

Glass delamination is the appearance of small, glass flakes in a drug solution.

Boron was used in the manufacturing process, and the surface chemistry — which is thinner than a human hair — was modified in a way that made it weak. When the old vials were filled, the drug product could make a portion of it weak, therefore causing the flakes to come off into the vial.

Corning eliminated boron from the manufacturing process, which in turn stopped the defect from occurring.

Valor — a brand introduced by Corning — is strengthened in a four-step process.

Corning publicly announced the launch of Valor in 2017. The company had pharmaceutical partners during research and development, and the improve vials got the first FDA approval in the fall of 2019.

Months later, the world was in the grips of the COVID-19 pandemic.

Once drug makers started working on vaccines, Corning's Valor glass came into play because of its special qualities.

"One of the really interesting things about a Valor vial is that it's externally coated. We spray on a coating, and it's adhered in place, so that when these vials are going down the pharmaceutical filling line, these vials are sliding past one another," said Schaut.

That allows more vials can be filled in a shorter amount of time. Schaut says Valor vials don't tip over as easily, and they can also stand up to extreme temperatures used to store the vaccine.

"That drug product wants to expand just like an ice cube in a tray. You know that liquid is actually expanding as it freezes, and that can put a lot of stress on a glass vial. Pre-existing defects might cause that glass to break during that process, but Valor, because it's chemically strengthened, it's able to withstand those stresses. And it can withstand a significant amount more stress than a conventional borosilicate vial would be able to," said Schaut.

Corning is supplying Valor vials to several drug companies, though company officials won't say which ones. One of the companies already has an approved COVID-19 vaccine.

Corning is making and distributing millions of Valor vials each week. The federal government invested $204 million in Corning under "Operation Warp Speed," which allowed them to quadruple production.

Company officials say by the end of 2021, they are on track to increase manufacturing 10x.

Corning also played other important roles during the pandemic. The company also makes lab products to support things like diagnostic testing and vaccine development and research done by other companies.

In fact, Corning donated vials, tubes, and pipette tips to the New York State Department of Health in the early days of the pandemic.

"Every vial counts at this point. Right now, it's really about getting the country and the world back to normal. It's been really refreshing to see the team spirit and everyone realizing it's going to take all of us. We're just part of the solution," said Amy Washco, marketing and communications manager for Corning Pharmaceutical Technologies.