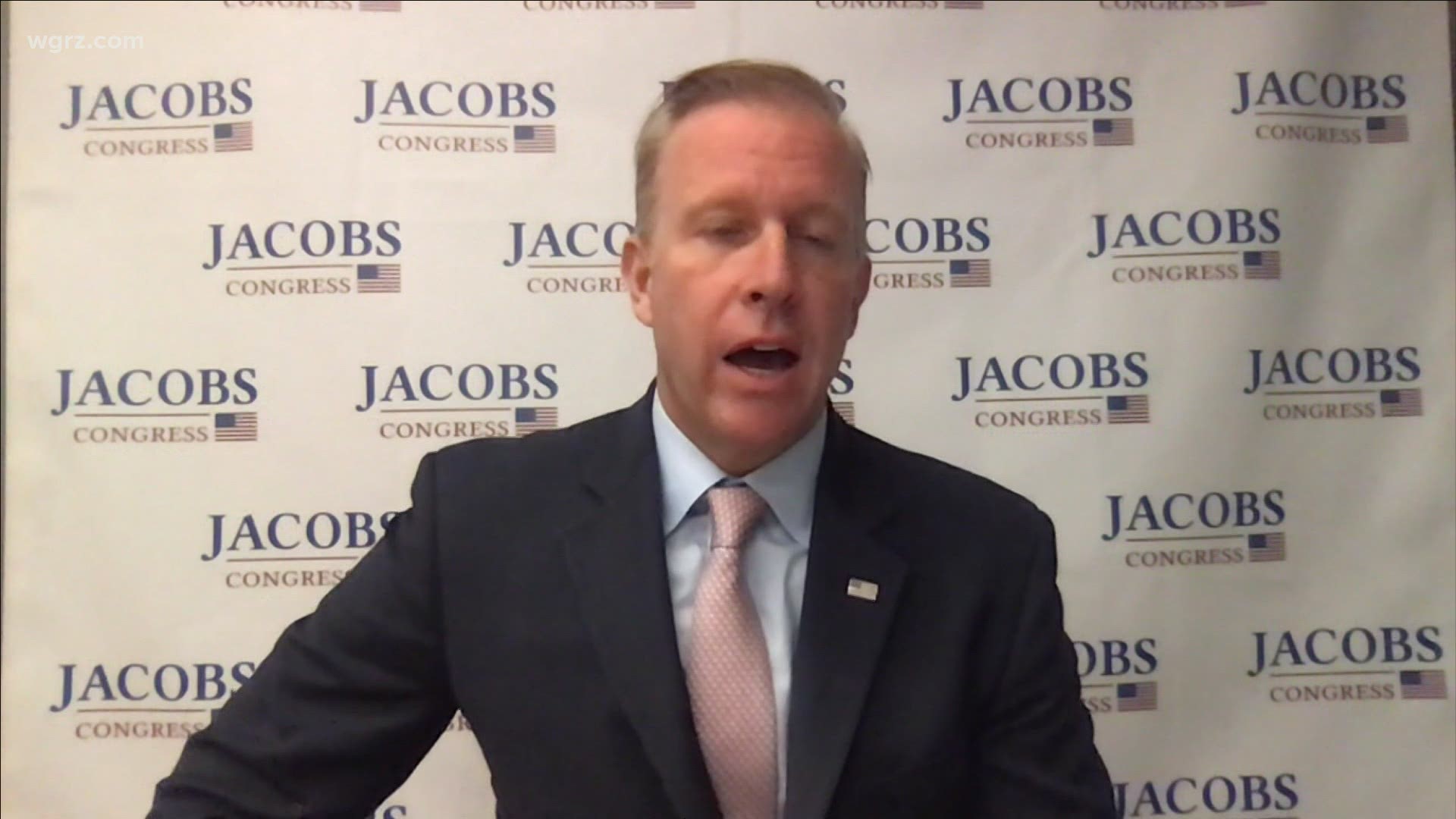 BUFFALO, N.Y. — 2 On Your Side is interviewing the two major party candidates for NY-27 ahead of the election.

Kelly Dudzik: Republican incumbent in the 27th District, Congressman Chris Jacobs, joins me now. Chris, thank you for being here. I want to let everyone know that we also interviewed Democratic challenger Nate McMurray for the Town Hall on Friday, to give equal time, and that video is on our website for people to watch. Chris, the 27th District supported President Trump by double-digits in 2016. The President tweeted his support for you before the special election, which you won by about five-points. With polling the way it is right now for the president, does that concern you at all for your race?

Rep. Chris Jacobs: First, Kelly, thank you for having me. It's great to be on. No, I don't believe so. I think the president will win the 27th Congressional District handily, but more so, you know, now that I'm in office, I've been in office about three months. I've been spending my time really talking about what I've been doing for the citizens of the 27th Congressional District, and one of the first things is getting the offices back open. Actually, all the offices and all the staff had been let go, and so there was nothing going on in terms of legislative activity and also, just as important, helping constituent issues, casework, people who were not getting stimulus checks, or social security checks and we've been able to actually help secure over $50,000 in stimulus checks and tax payments, refunds, that were, that my citizens were entitled to that they weren't getting, so we're working hard here to do the people's work. 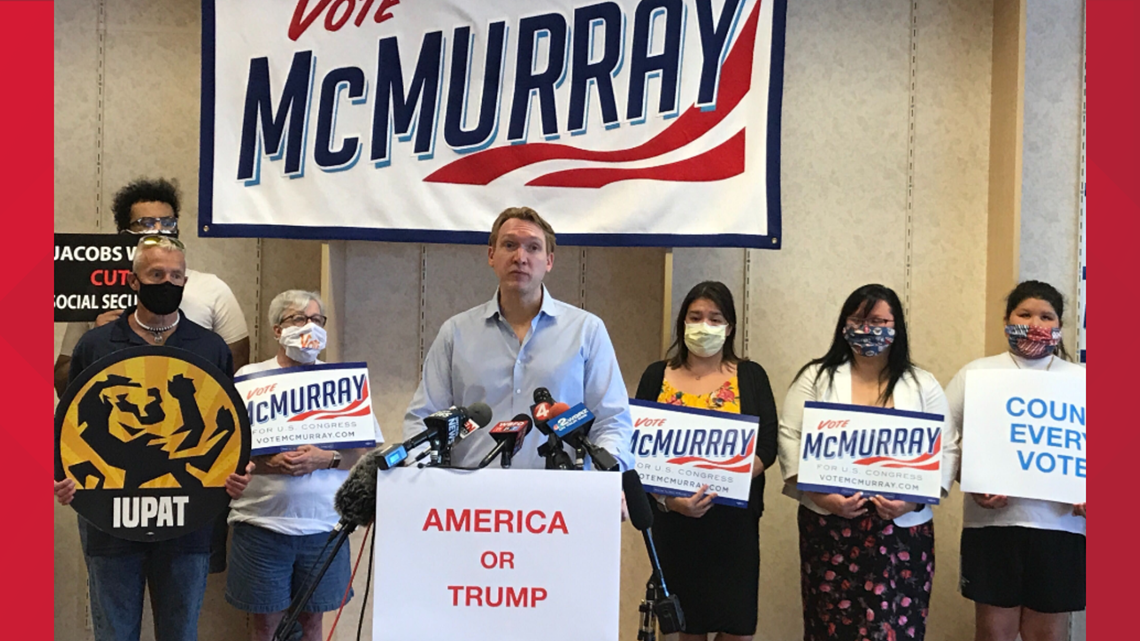 Dudzik: And Congressman, the first two issues listed on your campaign's website are "Secure our Borders" and "End Sanctuary City Policies." With the pandemic impacting every aspect of our lives, do you think those are the most important issues for people in your district right now?"

Jacobs: Well, there's a lot of important issues. Obviously, COVID is the overarching issue, but it impacts every element of our life, but I've been working hard in Washington to make sure that we're doing everything we can to reopen our economy and do it safely, and also, I'm very hopeful that still we can get a stimulus deal done. I know Nancy Pelosi set a deadline for tomorrow (Oct. 20) for negotiation to happen, and if not tomorrow, that we won't have one until after the election. We need a stimulus now. We need to keep this economy going. We need to provide critical resources to our local governments that are struggling right now, and we also need to help our hospitals, first responders, so that's what I'm really focused on. Certainly, immigration is an issue, major issue in our area, and we need to make sure we secure our borders. We have so many people that come to this country legally. That's the route people need to do it. People need to play by the rules, and that's why I think it's an important issue."

Dudzik: With the stimulus package, do you think it will include stimulus checks like the $1,200 most people got earlier this year?

Jacobs: I think stimulus checks have been talked about. Unemployment insurance has been talked about. I was happy that the president, you know, in executive action initiated stimulus checks, rather unemployment checks before we got a negotiated agreement in the Congress because of how important it was. I did think it was a reasonable compromise to bring the stimulus amount, the unemployment amount, down from $600 to $300 because what we saw in this area in talking to a lot of employers is that was, that $600 unemployment boost, if you will, was actually functioning as a disincentive for people to get back to work. We didn't want that. We wanted to help people who are in need, but we want people to get back to work, too, to get our businesses open and get our economy open again.

Dudzik: And, talking more about the economy, you're a business owner, job creation is something that you've indicated is important to you. How do you do that now with so many businesses closing and laying off workers if giving tax breaks isn't something that municipalities willing to do? How do you push for economic growth in Western New York and get companies to move here when it's so difficult right now?"

Jacobs: Well, keep in mind that prior to COVID, we had one of the strongest economies we've had in this area in a long, long time. Record low unemployment. Manufacturers were starting to come back. I think partially due to the great policies that we've seen at the national level. The new trade deal with Canada really bodes well for the automotive sector in this area, and also the agriculture sector, in particular dairy. So, the fundamentals were improving dramatically for our area, we just got to get open again and so we can benefit from it, so I think we're ready to go, it's just getting through this COVID situation, so we need to do it safely. We need to operate by doing it in a responsible way. And the good news is, I think a vaccine is very, very close to reality here as we get back to it, so we need to do that. I think the national policies, the tax reform that the president passed - huge benefit to this area. What we also need though is we need a state government, which will do the same in terms of more responsible policies that make life living here and our business ability to be affordable to do business here, we just have too many people still wanting to leave New York State to go to other areas and we have to change that dynamic.

Dudzik: How do you get them to stay, and how do you get young people to stay and not leave after high school or college?

Jacobs: The job opportunities need to be there. We need to convey that they are there and, you know, if you see, you see a lot of openings for jobs right now in our area, so we want to do that. I think that you've seen in Western New York, Buffalo, a lot of young people choosing to stay here, and I think one bright spot out of the COVID crisis is that you are seeing a lot of people taking, reconsidering living in the really big metro areas, like New York City and coming back to a mid-sized city like Rochester, or like Buffalo, or Lockport, Batavia, or some of the other areas where they can have a high quality of life, but economic opportunity. And also maybe do it in a remote way where I think a lot of people have been working remote and see that it's feasible for at least part of their work to do it remotely, so they could even periodically go to the big city when they need to do business, but they can come back home, live affordably, and have a better quality of life for themselves and their families.

Dudzik: And finally, you have become a big supporter of President Trump, your Twitter banner on your campaign's account has his picture and your picture on it with his Keep America Great slogan, and your bio line on Twitter says: "Trump Endorsed Candidate for New York's 27th Congressional District." If he does not win a second term, and you win a full term in Congress, how do you plan on working with Democrats to get things done in Washington so there isn't gridlock? They're very likely to keep control of the House."

Jacobs: I think I have a good track record as a person that was in elected office previously and in Erie County which is 2-to-1 Democrat. My Senate seat was 3-to-1 Democrat. So, I've been able to garner support of Democrats and Independents alike because I think they view me as a person that's reasonable, a person that's willing to look at the other side, and a person that's civil with one another when we disagree, and I would actually say my opponent does not demonstrate that, but I've actually already been in a bipartisan manner in Congress, Brian Higgins and I worked together on several issues. Most notably, recently was the issue regarding the former, the unfortunate plane crash that happened recently in Genesee County that we both called together and sent a letter to the NTSB to do a full in-person investigation of that tragic site. So, we've also done issues on a bipartisan basis regarding water levels and flooding problems in Lake Ontario, and I will continue to take that tact, I have in the past, and I will again, irrespective of who's in. If the president wins and the Congress is still in Democratic hands, I will do it then, or if things change at the presidential level. My focus is to represent robustly the 27th Congressional District and doing everything I can for this region's comeback in terms of the economic comeback, in terms of people coming back to live here, in terms of the agriculture sector thriving again. I think this is one of the greatest areas in the nation, and I want to see it achieve the potential it deserves and the citizens deserve."

Dudzik: All right, Congressman Chris Jacobs, thank you for joining us for our Town Hall today.