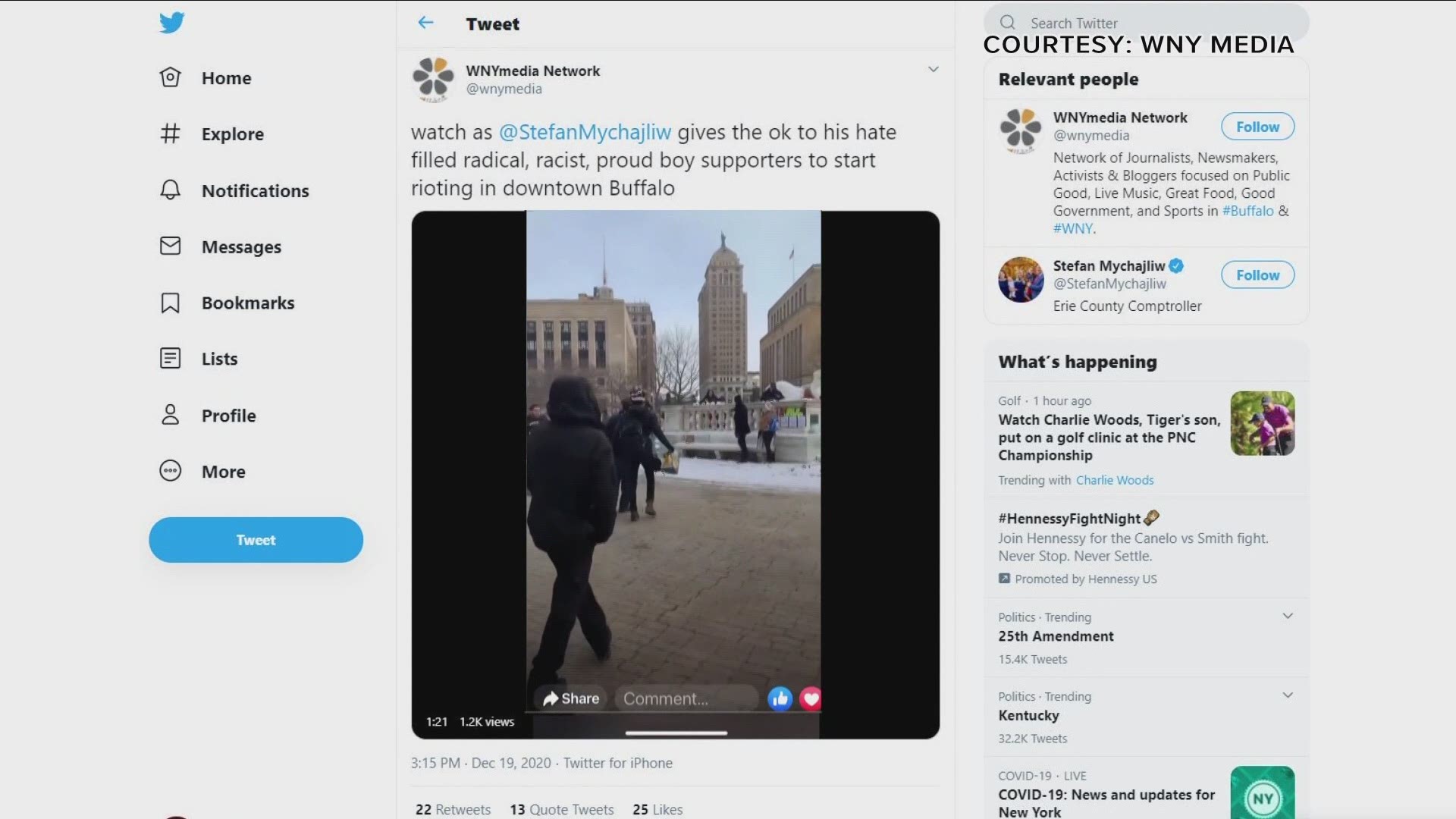 BUFFALO, N.Y. — The subject of COVID control where the government imposes certain policies with the stated intention of trying to prevent the spread of the virus has generated another round of controversy here in Western New York — and this time it involved dueling protests.

There was some confrontational activity between protestors upset with the COVID restrictions and another separate group of demonstrators calling attention to COVID deaths.

A video, which is in a tweet from the WNY Media website shows a group of individuals, some wearing helmets as they confront Erie County Comptroller Stefan Mychajliw with profane insults as he gets out of his car to join the demonstrators assembled in the square.

It appears to show someone knocked to the ground and scuffling and then a person coughing.

Buffalo Police tell us there were no arrests or major injuries or even a real report filed because no one wanted to file charges. There was someone with cuts on their hand who turned down first aid assistance.

Police say this scuffle apparently began just after officers told the COVID memorial protestors to move on because they had blocked traffic at the square with plastic bags said to resemble body bags.

Previously there was a meeting of business owners and others in Orchard Park also upset with COVID restrictions. Mychajliw attended that meeting before driving to Niagara Square. Once again those attending called for all businesses to reopen as a challenge to the Erie County Health Department and the State of New York.

Mychajliw did issue a statement later about the incident at Niagara Square saying he was confronted and felt threatened, but was able to step away from the skirmish. He does have a concealed carry permit, but did not pull his weapon.

Mychajliw says someone fired off tear gas and pepper spray and he had to wash it off. Buffalo Police say they did not use any chemical irritants.

Erie County Executive Mark Poloncarz tweeted Sunday that his office is aware of the incident, saying in part "a county elected official should never be involved in such incident, nor proudly announce afterward he was carrying a gun but didn't use it."

Poloncarz went on to say that officials should defuse situations such as this, "not incite them."

Officials should defuse such situations, not incite them. While the comptroller may have a permit to carry a gun, weapons of any nature are prohibited in county workplaces. If he attempts to enter the Rath Building with a gun it will be confiscated or he will be denied entry. 2/2

You can read Mychajliw's full statement below:

"About five seconds after arriving at a peaceful rally at Niagara Square and getting out of my car, a counter-protestor, clad in black, fully disguised, wearing some sort of concealed black motorcycle helmet, got in my face, and physically accosted me. He made physical contact and approached me in a threatening manner. I did not remove my firearm from my holster. As a responsible owner and carrier of a firearm, I felt threatened but not to the point where I felt the need to remove my firearm from its holster. Responsible concealed carry permit holders have the privilege of having a firearm on our person without the need to ever use it to defend ourselves or our family.  I hope and pray I never, ever have to use my firearm to do so. Other than coming home and quickly showering to get pepper spray off myself and clothing, everything is fine.

"I stepped back from the ensuing physical confrontation, of which protestors sprayed pepper spray and threw cannisters of tear gas. I was told one of them showed a large knife. A friend of mine told this person they too were prepared to defend themselves with their legally obtained and concealed firearm.

"I am thankful for the opportunity to speak at our peaceful rally. I even said I would strongly defend the right of protestors to be there and make their voices heard.  Being a former journalist and staunch supporter of the First Amendment, I will always fight for the First Amendment rights of counter protestors, even when their opinions differ from mine.

"What I cannot tolerate are protestors trying to pick a fight. Trust me, I know. To my knowledge, folks there to support America and our freedoms at the rally were not carrying pepper spray and knives. Issues did not begin, and police were not called until a counter protestor got in my face.

"Many thanks again to the Buffalo Police Department for protecting our rally and for protecting counter protestors.  Good people can disagree without being disagreeable. I will never back down from supporting businesses getting crippled by over-reaching COVID-19 restrictions.  Ever."