The president of a nonprofit operating the building says action will be taken this week on an apartment described as the 'epicenter' of the issue. 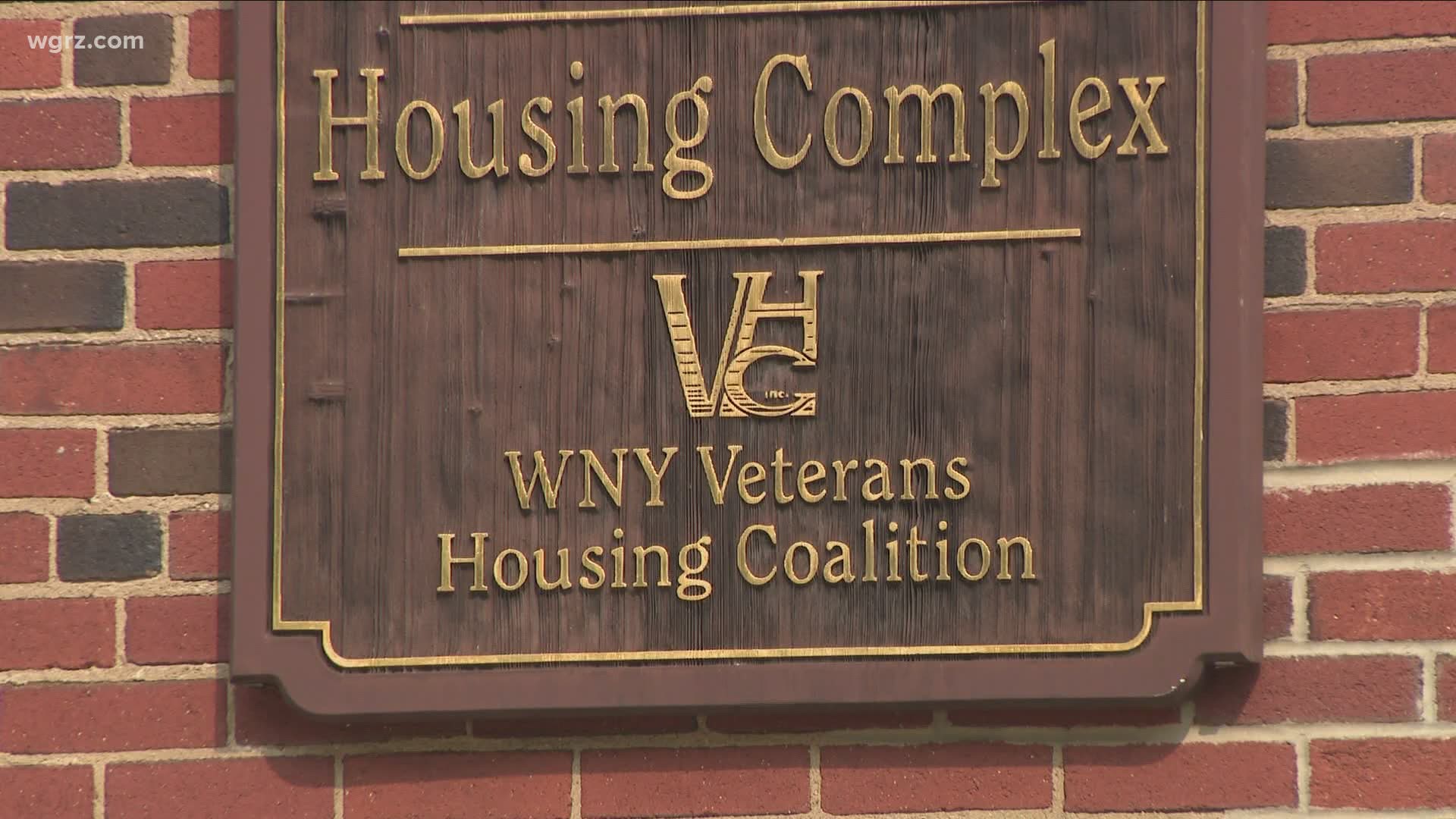 BUFFALO, N.Y. — On the northwest corner of the Buffalo Medical Campus, there is a brick, four-story building.

There are a couple of storefronts, but most of the structure is dedicated to housing: 26 apartments. Surrounded by construction and new buildings, the place looks shabby in comparison, but Chris Vamosy is grateful to live here.

“For the first time in my life, I’m doing better things. I’m clean now. Trying to do what I have to do,” Vamosy said.

For almost two years prior to moving in, Vamosy was homeless. The veteran is recovering from drug addiction. Getting the apartment was a turning point for him.

Vamosy said, “I’m free and clear off drugs. I’m off alcohol. I’m trying to live a different way. I just need that place cleaned out.”

"That place" is a neighboring apartment, number 308. It’s unoccupied. The man who lived there died in late August. His body was discovered by police on August 24. It appeared the man had died some days earlier.

Left behind was an apartment covered in trash, dirty clothes, dirty dishes, food containers and lots of cockroaches.

Credit: WGRZ
This is from cellphone video of Apartment 308 thought to be the epicenter of the building's cockroach problem. The frame shows food wrappers piled up on the sink and insects crawling on the wall.

The door appears to have been left unlocked. Vamosy showed 2 On Your Side cellphone video of the incredibly messy apartment and later brought us into the building to see for ourselves.

We did not walk in, but from the opened front door it was clear the video matched the scene inside.

On the door to the main entrance is a sign telling all residents there is a monthly mandatory inspection of each unit for cockroaches.

The building is owned by WNY Veterans Housing Coalition (WNYVHC), a nonprofit dedicated to getting homeless veterans and others off the street. The property at 1125 Main Street is just one of four buildings in Buffalo the charity operates and maintains.

2 On Your Side spoke by phone with President and CEO of WNYVHC, Gigi Grizanti, on Tuesday and again on Wednesday.

Grizanti was candid: “We’re not here to have people live in squalor.”

She said maintenance staff had been working for some time to eradicate cockroaches. Another tenant, described as a hoarder, was suspected of introducing the insects into the building.

Then, the resident in apartment 308 began denying entry to anyone.

Grizanti says, “He was a recluse, and he insisted he didn’t need any help. No one had any idea how bad it was until August. He wouldn’t let anybody in. He wouldn’t return phone calls.”

After the tenant’s death, an exterminator brought in to treat the apartment, but because of all the garbage and debris, Grizanti says it was not very effective.

It is the organization’s policy that should a resident die, family members have two weeks to remove belongings.

“The family has just recently told us they don’t want anything,” Grizanti said.

A clean-up of the apartment is set for this week. Grizanti says the person doing the work will be in a head-to-toe protective suit. Then, a thorough treatment of the apartment by an exterminator.

Grizanti said, “It seems to me that this is like the epicenter of the cockroach problem now.”

This news comes as a relief to Vamosy, who had been trying to seal the door to his apartment to keep the cockroaches from getting into his place.

“I feel so grateful for having the apartment. I didn’t want to ruffle any feathers. I didn’t want it to seem I was complaining about the place. Any place is better than the street,” Vamosy said.

The charity issued a full statement.  You can read it here:

At Western New York Veterans Housing Coalition, it is an honor to serve those that honorably served our great nation.  We believe we have done an exceptional job providing permanent supportive affordable housing for and serving more than 20,000 veterans over three decades of service.  Our mission can be challenging.  We turn no one away, especially veterans struggling with severe mental health issues.  Some are hurting, broken and have nowhere to turn.  We have a positive track record of helping thousands of homeless veterans for 33 years.

Laws governing our agency prevent us from interfering with one’s lifestyle, especially if their individual choices are impacted by mental illness.  One recent issue involved a veteran with multiple challenges.   As soon as we became aware that this Veteran’s issues were escalating, and potentially impacting other tenants, we acted quickly to remedy the situation.  Sadly this Veteran recently passed away.  Since this individual’s death, we followed protocol allowing the surviving family members the opportunity to remove any personal items and have been pro-active planning for and finally able to clean and disinfect this Veterans apartment. The sad reality of providing housing in large buildings, especially many who are dealing with mental health issues, is dealing with the occasional infestations. Our agency has always made significant and immediate efforts in mitigating any infestations and at no cost to our Veterans.  We will continue working hard to provide a safe and supportive living environment for all Veterans who need our services.  We always do the best we can to help the Veteran population we serve in improving their lives in any way possible