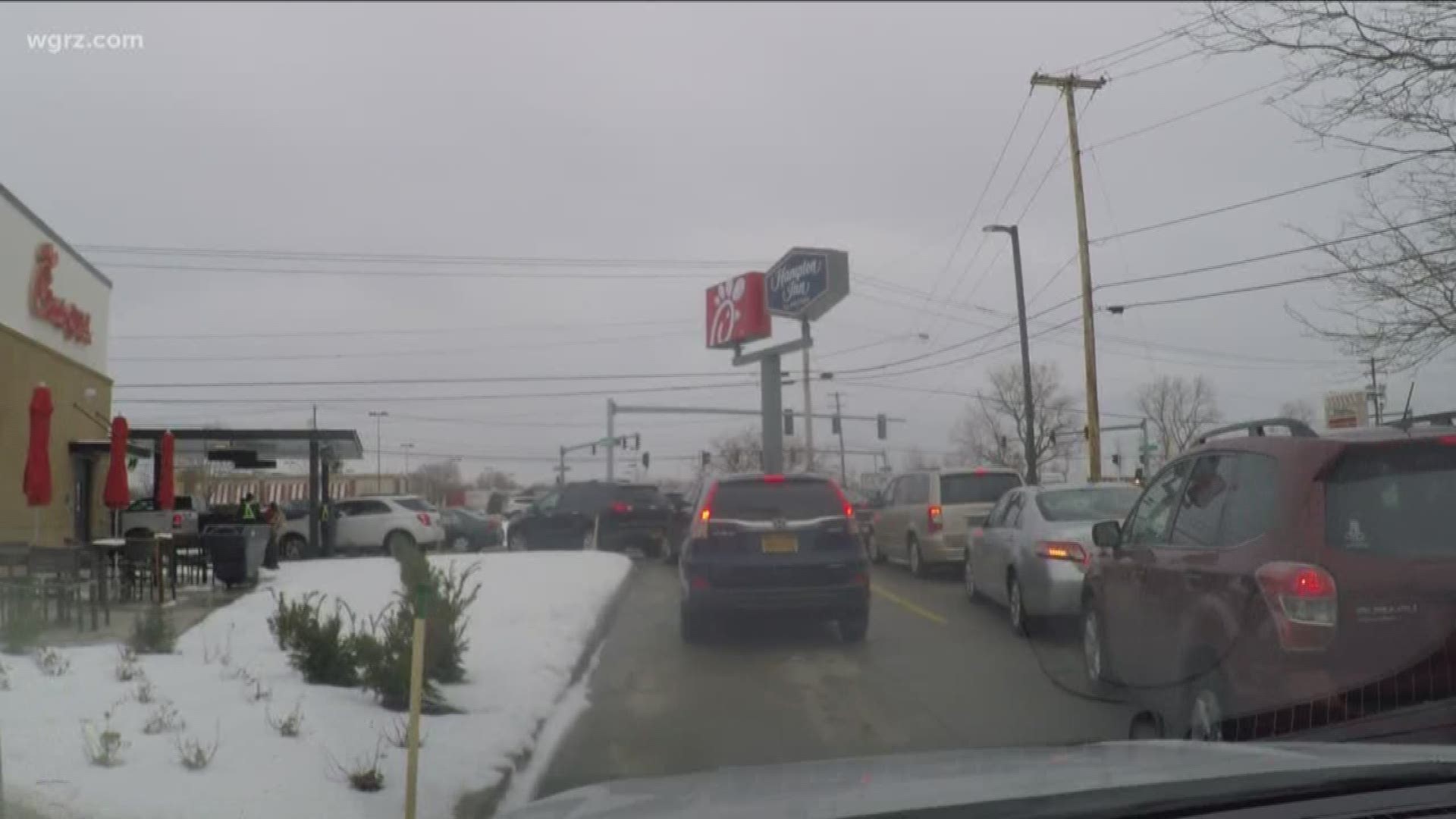 For those who know nothing about Chick-Fil-A, let's go over some of the basics:

On the menu you'll find chicken nuggets, chicken strips, and only waffle fries. Lemonade is made in house and breakfast is served. If you dine in, your food is brought to the table.

"For grand opening we brought in 60 experts from across the nation who can crank out chicken through the kitchen so we are fully equipped to handle the long lines and traffic," said Store Manager Cassandra Sheedy. "We are making sure [customers] have their beverages refreshed, we are taking their trays when they are done with their food," Sheedy explained.

And when we asked about tipping, she said, "No. Here at Chick-fil-A we don't do tipping."

Some may think customers have to ask for sauce, but Chick-fil-A wants to dispel that rumor. "I'm not sure where that came from here at Chick-fil-A Cheektowaga I can guarantee you that if you want sauce - by all means ask for it and we will ask you," said Sheedy.

If the drive thru line gets too long, restaurant employees will come outside with tablets to take your order, and you can pay right there with a debit or credit card.

"In addition to that we will have an outside runner for food so that we can run food to bypass people who may be waiting a little bit longer for their food," Sheedy told us.

And parents will love this: there's a play area for toddlers, and the toy that comes with a kids meal can be traded in for an ice cream cone any time of the year.

But not on Sundays. That's when Chick-fil-A is closed.

"We close on Sundays because we ask a lot of our employees throughout the week," Sheedy explained. "So the six days we're serving guests, its hard work. In the spirit of putting people first, we close on Sundays to give them a day rest."

And those Chick-fil-A employees are going through training right now for the big day. Just over 100 people will work here, with applications still being taken.

What about the traffic? 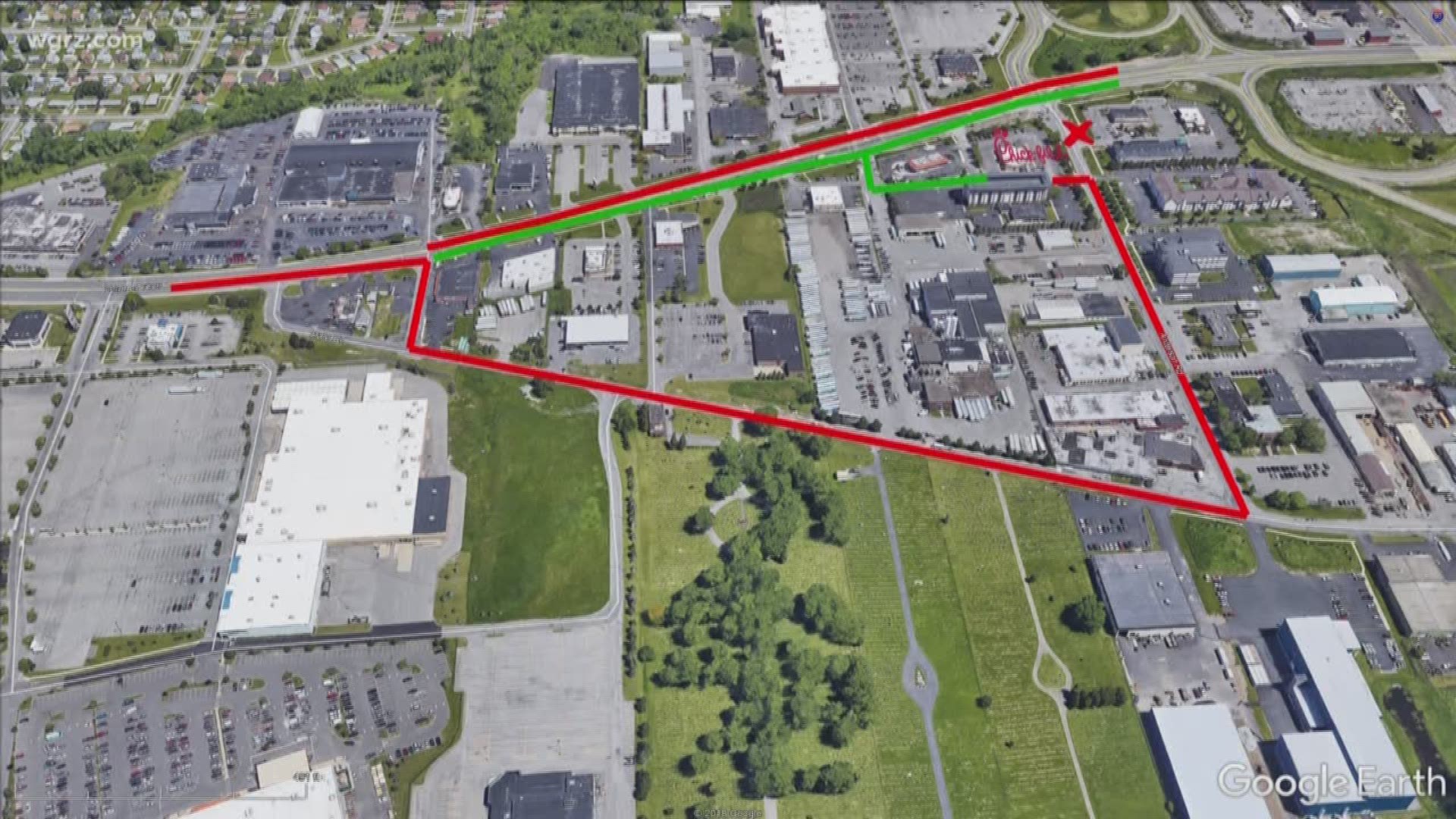 A big turn out is expected for the grand opening Thursday, so 2 On Your Side looked into what Cheektowaga is doing to prepare for the traffic. A plan is indeed in place - to hopefully move the long lines.

Cheektowaga Police say they've been working on this traffic plan for a month, with the help of Chick-fil-A, to make sure things for smooth beginning on Thursday.

Beginning Thursday morning traffic will be diverted at the corner where the restaurant is located, Walden Avenue at Anderson Road.

If you're dining in or carrying out, police want you to follow the green line and use the entrance to the west of Chick-fil-A by McDonalds and Chipotle

And if you're going to the drive thru, you should follow the red line and use Peppy Place, where you'll see a big inflatable cow, then turn on Dale Road and then Anderson.

We're told five officers at a minimum will work traffic duty. The last time Cheektowaga police had a major grand opening like this was Cabelas, four years ago.

"We have five officers that the Chick-fil-A has agreed to compensate the Town for their working the details," said Cheektowaga Police Captain, Scott Pilat. "We'll do everything we can to keep the traffic moving and chicken sandwiches moving."