Cheektowaga, NY - A political firestorm erupted on social media over the position of bingo inspector in Cheektowaga.  2 On Your Side spoke with the man who was let go and to town officials who are battling over this patronage job. 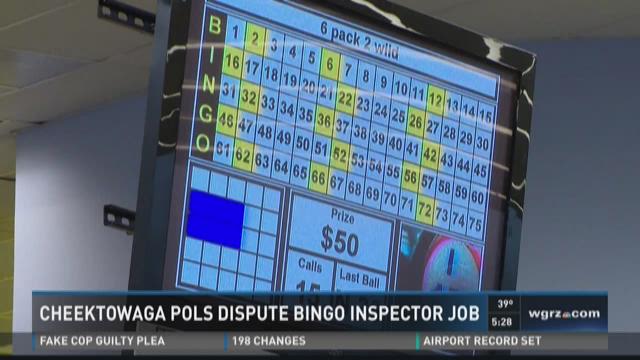 Cheektowaga, NY -- A political firestorm erupted on social media over the position of bingo inspector in Cheektowaga. 2 On Your Side spoke with the man who was let go and to town officials who are battling over this patronage job.

Official bingo inspector for the Town of Cheektowaga pays roughly $6,000 dollars a year to check bingo halls in town for compliance with state regulations on games of change. Anthony Prep was an inspector for nine years, but last night a majority of council members did not call his winning number. So he had this reaction when a replacement for him was chosen last night.

We asked: "So you think this was political retribution?

Tony Prep has been a friend and Democratic committee man according to Supervisor Diane Benczkowski, who actually sent out a tweet after Prep pleaded for his job before the board.

It read: "Broke my heart tonight that certain board members voted an 89 year old veteran out of his BINGO inspector job just for political retribution." It was retweeted by County Executive Poloncarz among others. Benzcowski says "They wanted Tony out and put somebody else in. "

Magierski says, "No singling out for any particular reason. It was just thought that we could move Tony Prep out and give this woman the opportunity." Majierski says another inspector was re-appointed after not supporting her candidacy. But she admits it reflects political infighting.

"Unfortunately there's strife and stress on the town board which you know doesn't bode well for the town as a whole. I think it doesn't give us a good sense out in our community," Magierski says.

2 On Your Side asked the Supervisor: "For Cheektowaga taxpayers, residents to see the board debating over bingo inspectors...doesn't that kinda put you in a bad light?

She replied, "I would think that I want the taxpayers to know that I'm taking a stand for what's right and if Tony was to be replaced then that position should actually be to the public then."

The Supervisor says they'll get over bumps like this to function as a board. And Mr. Prep even agrees maybe the bingo inspector job should be open to the public and not just friends or the politically connected