Chautauqua Lake weed management agreement: Will there be support?

The use of herbicides and/or harvesters to treat the abundance of weeds in Chautauqua Lake has residents, municipalities, and community groups at odds. But the Chautauqua county executive hopes his newly released lake management strategy and agreement can get everybody to work together. Check out the document here:

MAYVILLE, N.Y. — Today Chautauqua County Executive, George Borello unveiled and signed his Memorandum of Agreement for the Chautauqua Lake Weed Management Consensus Strategy. It's essentially a middle ground document which hopes to get clashing community groups and municipalities to work together on the lake weed problem.

When are Stakeholders expected to sign on the dotted line?

It's apparently a "wait and see" situation.

Borello plans to present his signed copy of the document to the county legislature for their approval Wednesday night. The stakeholders have the next few weeks to go over the document and decide if they're willing to sign on.

Ecology and Environment held three meetings with stakeholders between January 25 and February 13 of this year, to get their take on the weed problem in the lake and what they think should, or shouldn't, be done about it.

Who are the Stakeholders?

What would they be agreeing to?

The consensus strategy outlines a number of tenets that the stakeholders must agree to and comply with to be eligible for funding.

The first is the creation of a Centralized Lake Authority that will "define responsibilities, funding priorities, and an organizational structure for the creation and implementation of a Comprehensive Lake Management Strategy (CLMS), which will be developed and updated annually."

The plan is to study the plants in the lake to make sure the best mitigation decisions are made.

There is a tenet that requires efforts must be made to protect fish habitats in the process of mitigating the weed problem.

And in terms of herbicides, the document clearly state that those who sign on to the agreement "will not support the widespread use of herbicides, and will, therefore, advocate for the restriction of herbicide use to 25% or less of the littoral zone South of Long Point only (approximately 567 acres)."

The tenets also state that once the Authority approves a mitigation strategy, there will be a small scale pilot program, so that impacts both positive and negative can be observed.

Drinking Water Safety. The County will partner with the entities that draw drinking water from Chautauqua Lake to perform a feasibility study aimed at providing alternative municipal water supply connections as an emergency backup, and eventually as a primary source of drinking water.

Since threats of lawsuits have been thrown around over the past several months, the agreement states that the Participants who sign on "agree not to pursue litigation against the County or any other Participant who is not in violation of the Agreement's tenets."

Who will pay for all this?

The plan is to involve all municipalities that have stake in the lake to share in its management costs. They plan to establish a cost/funding structure so that all can fairly contribute.

The county executive's office sent us a sample copy of the MOA.

You can read it here: 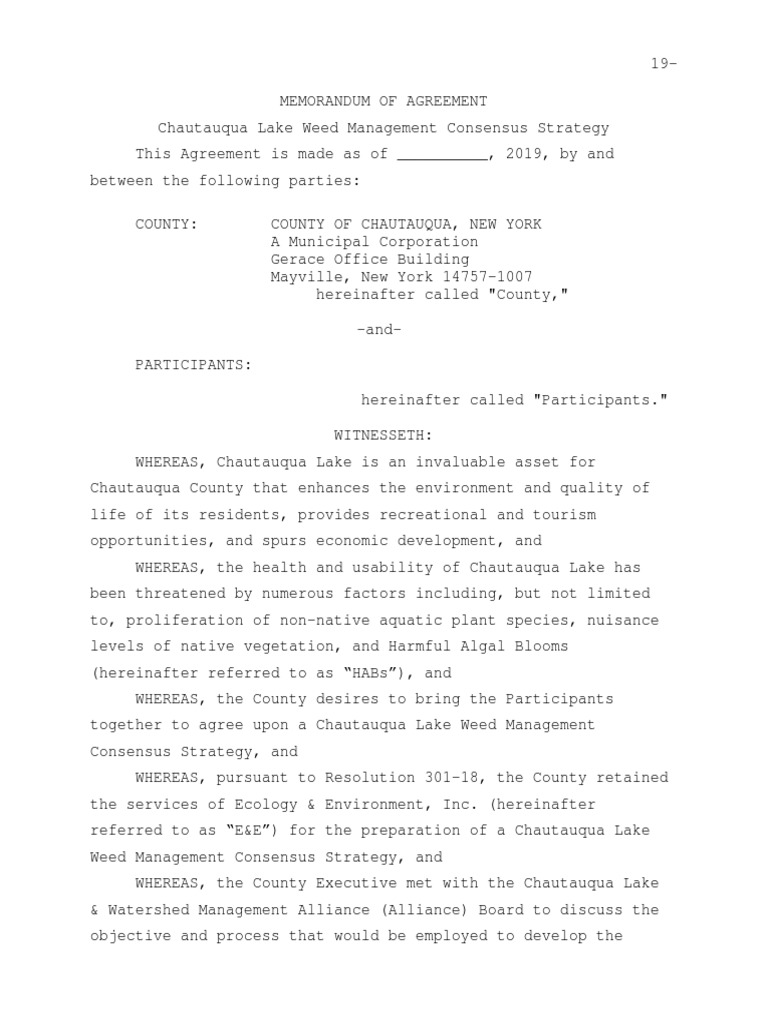 MOA for Chautauqua Lake Weed Management Consensus Strategy | Herbicide | Algae
WITNESSETH: WHEREAS, Chautauqua Lake is an invaluable asset for Chautauqua County that enhances the environment and quality of life of its residents, provides recreational and tourism opportunities, and spurs economic development, and WHEREAS, the health and usability of Chautauqua Lake has been threatened by numerous factors including, but not limited

Evans supervisor determined to have beach open this summer