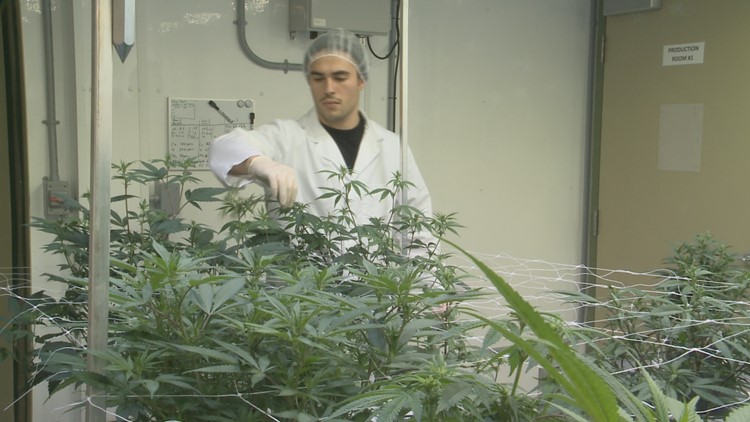 Canada's only post-graduate program in commercial cannabis production is at Niagara College in Niagara-on-the-Lake.

NIAGARA-ON-THE-LAKE, ONT. – Niagara College Canada in Niagara-on-the-Lake is home to Canada’s only commercial cannabis graduate certificate program. It's a one-year program where students learn how to commercially produce cannabis, learn about the regulations for both medical and recreational marijuana, and are taught how to assess crop health and manage pests.

This month, 2 On Your Side’s Kelly Dudzik visited the campus and spoke with two of the first Canadians to get into the program. She also spoke with the professor who crafted the program.

MORE: You can watch Kelly's full report online here, and take a virtual tour of the lab here.

We've also got the extended interviews from this story online, which you can watch below:

Carson Otto: "Well, I've always loved cannabis all the way through high school and whatnot, and it's always been a passion of mine. So, I wanted to aim my career towards the cannabis industry knowing that its growing so quickly. So, I got, I was a chemical engineer trying to get into the pharmaceutical field, and then I applied to this program thinking that I could get my foot in the door to the cannabis industry."

Kelly Dudzik: "And, it's a popular program, so you're one of the first ones to get in."

Carson Otto: "Typical day we have lecture hours, so it would be one or two lectures. Twenty-four people in our class and then we do our lab work, so we come into here and we work on the plants whether we're working on like the elemental feeding or we're doing different cropping methods to get them to grow properly. It all depends on what class and what lab it is. We also have an IPM (Integrated pest management) entomology class, so we introduce bugs in here weekly."

Carson Otto: "Well, like, I learned there's a lot more to growing than just adding water and soil in your backyard kind of thing, you know what I mean? So, there's a lot of nutrients and stressing the plants and the way light cycles work and how the photoperiodism of the plant, how to study that and get it to grow in the right times, basically I learn that it's a lot more complicated than everybody thinks."

Kelly Dudzik: "How did your chemical engineering backyard help you with what you're doing now?"

Carson Otto: "A lot of the chemistry behind this, I understand pretty well. When we're looking at the greenhouses at the facility, it helps me kind of I had some, I used to do process diagrams and whatnot to design other different types of facilities. I can apply to greenhouses. So, it kind of helped me as a background of the whole grand scale of it."

Kelly Dudzik: "When you're done with this program, what do you want to do?"

Carson Otto: "I want to get in with a licensed producer. Right now, I'm looking to find a career path in that sense, but eventually once the market opens up a bit more, I want to start my own business in the cannabis industry. I think it's a really exciting field and I think as the regulations start to get lower, there's going to be more opportunity for growth."

Kelly Dudzik: "What do you think would surprise people about what you're learning? Anything?"

Carson Otto: "Well, I think it's surprising that we're going to school for growing weed. I think that's a surprising factor for sure. But it depends on who you talk to. Like I said a lot of people who don't know about growing think it's a very easy thing. So, a lot of the things we're learning people don't even think about when growing weed, right?"

Kelly Dudzik: "What's the reaction you get from people when you tell them that this is what you're going to school for?"

Carson Otto: "Um, older people are like wow congratulations, it's a growing industry. Then the younger people, you know, give me props and they're like nice, you're growing weed in school.

Kelly Dudzik: "How did you get interested in this program?"

Denzil Rose: "So, I had actually graduated from Niagara College in greenhouse technology last year, so it seemed like a logical step for me as the industry was opening up and there's just a huge need for growers, right? Huge need for educated people. So, I decided to jump into the industry and I've always been passionate about cannabis, so, you know."

Kelly Dudzik: "What's the reaction that you get from people when you tell them what you're studying?"

Denzil Rose: "I'm surprised, it's been overall pretty great. Like even my grandma's going around telling people, hey, my grandson, he's growing pot. That's cool. So, it's pretty awesome to see that and get that reaction from people."

Kelly Dudzik: "What's your typical day like when you come to class?"

Denzil Rose: "Not many days are typical here. We're doing a lot of plant work, we're doing a lot of in-class work, working in labs, looking at a lot of insects under microscopes and whatnot. Weighing fertilizers and stuff, so it's a different thing every day and we're always following the plants as they grow."

Kelly Dudzik: "What does it mean to you to be able to get outside of the classroom, you're not just stuck looking at books and in a lecture hall, you're actually out doing stuff that will be helpful for when you start your career in this."

Denzil Rose: "Absolutely. It's fantastic to be able to get hands on experience with the actual plants, right? Being able to see them through the life cycle and being able to be responsible for our crop. I think that's an invaluable experience for anyone who wants to get into the industry. It's not just an underground business anymore. It's a very legitimate business and people want to go to school for this to prove the legitimacy and prove the professionalism, and I think that's a hugely important factor. And this is a multi-billion-dollar industry so it's only going to expand globally so I think it's, it's a great industry for anyone to get into if they're interested."

Kelly Dudzik: "How important is it for you to be on the ground level of this so you can be an ambassador for the industry?"

Denzil Rose: "I feel like it's fairly important for me to be able to be that ambassador. I've spoken at a couple of conferences and whatnot already as a, just a student and an ambassador from Niagara College and a grower myself, so I think it's fantastic for a young person like me to have that opportunity."

Bill MacDonald: "I was coordinator of the greenhouse program, technician programs here at Niagara College, and then five years ago, I started consulting in the cannabis industry. And saw how much it was transforming the greenhouse industry and approached the college and said, hey, we need to do a program because this is transforming the whole greenhouse industry, growing industry, and a lot of licensed producers were coming to me saying we need qualified growers. We don't have enough experienced talented people, so that's why we started the program to supply employees into the space."

Kelly Dudzik: "What was the reaction you initially got from the college when you came to them with this idea?"

Bill MacDonald: "So, I was apprehensive. It was extremely positive. Every step of the way, that you'd go to one committee, the next committee, and I'd hold my breath and email my dean at 11:00 at night, how'd it go? It's good. And so, all the way long, extremely positive. It is a very innovative college. It was a lot of Friday afternoons late developing curriculum. But the big thing is, we did it with licensed producers. We went to them, said what do you need, then we had them come in and critique it and then okay how do we change it, so it's been really built with the licensed producers."

Kelly Dudzik: "That way you know once students go through the program they will have skills they'll actually be able to use in the field."

Bill MacDonald: "Exactly, we're not telling licensed producers this is what you get. They told us what they wanted and that's what we're teaching the students."

Kelly Dudzik: "So, it's a one-year program."

Kelly Dudzik: "What do people learn, what kind of classes do they take?"

Bill MacDonald: "So you're taking everything. The major focus is growing, so the actual growing of the plant, the fertilizers, pest control, but then it's all the regulations. This is extremely tightly regulated by Health Canada. So, you have a whole course in regulations, which I thought would be a bit of a boring class. It's dynamic because everything's changing, so it's a very dynamic class. And then just the history of this plant, you know, the thousands of years it's been around, why was it prohibited, so we do a lot of that, so and then also we get into tracking it. We have to for Health Canada track every piece of this plant all through computer software. We're just at the tip of the iceberg of what this plant can do."

Kelly Dudzik: "What are some of the misconceptions that you think people have out there about the plant?"

Bill MacDonald: "Everything. That it's just a bunch of stoners that are coming here just to lie around on the couch and smoke weed. It's professionals, it's medicinal, and it's a plant that is not easy to grow, so it's really trying to figure out how do you get all these pieces put it together and grow a plant medicinally and in Canada now for the recreational market in a very, very safe manner."

Kelly Dudzik: "How has the mindset changed here in Canada?"

Bill MacDonald: "It's changed in the last two years, one year, six months, it's incredible that two years ago when we started developing this program, it's oh I don't know. And but there was acceptance. And then as it gets closer and closer, then more people start saying well, I use this medicinally, I have Crohn's disease, I have seizures, and I have to control that, so it's become more and more accepted and October 17 came and went, nothing really changed. It's sort of like a few people think Armageddon, nothing really changed in Canada. We're Canadians."

Kelly Dudzik: "What advice do you have for them if they want to study cannabis?"

Bill MacDonald: "Be professional. This is really all about knowing your science. Knowing your regulations. Go in with your eyes open that it's a really emerging field, there's a great future, you're going to have to work hard and long hours."