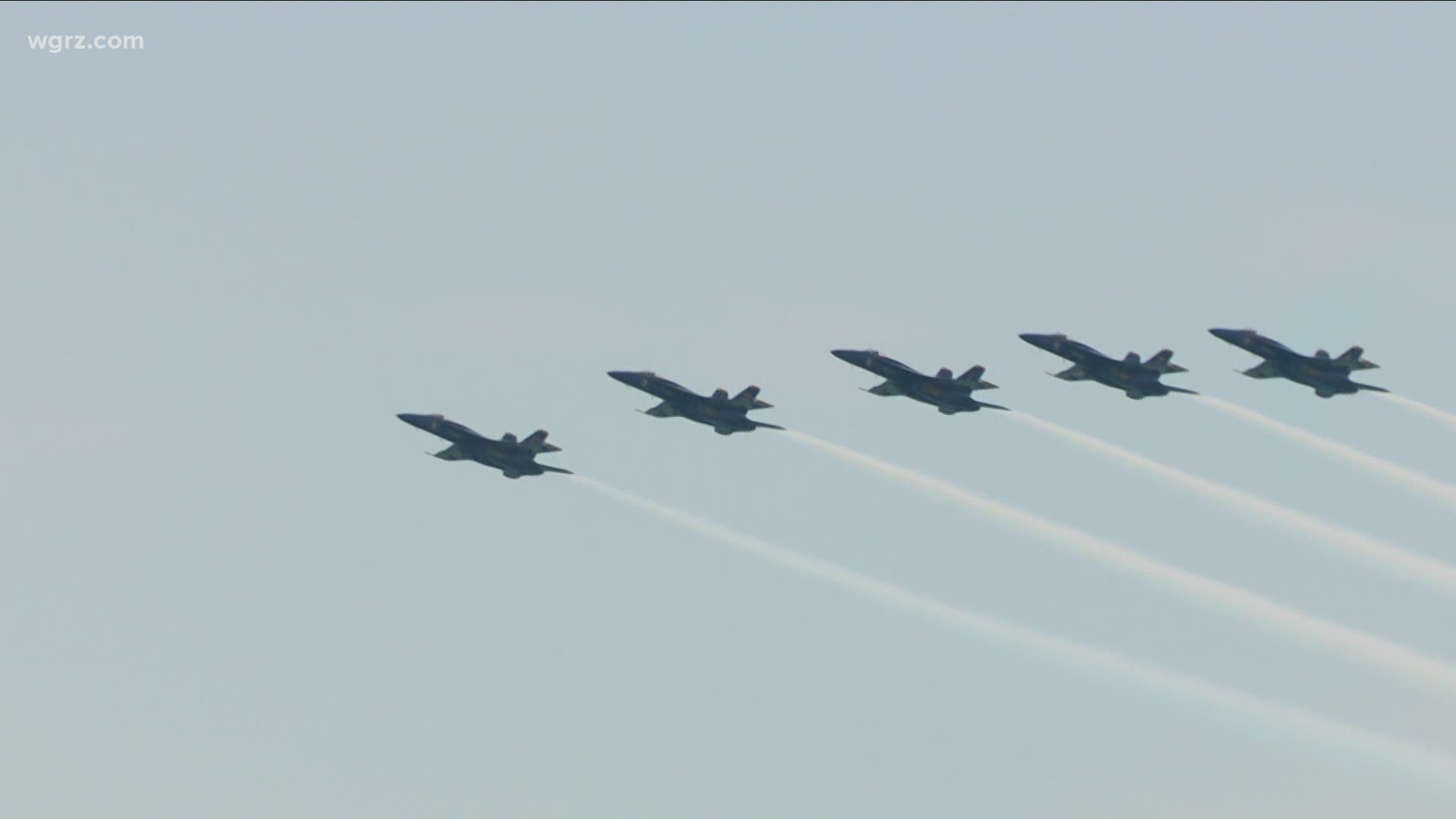 BUFFALO, N.Y. — Now that it's quiet again on the waterfront, the planners of the Thunder on the Buffalo Waterfront airshow are reviewing how things went with a COVID-forced quick change of venue from the airbase.

And don't forget the fog, which abbreviated the show on Saturday.

2 On Your Side has the views of organizers and those who attended the airshow with a look ahead to the future.

As the airshow director Ben Canetti puts it: "We had a little hiccup with the weather Saturday, so had to make some last-minute changes. But overall, the first time ever doing it down here, we're going to call it a huge success."

Actually, airshow planners had to first shift gears after the federal government decided a Niagara Falls airbase show couldn't happen with COVID restrictions imposed by the Pentagon. Many military installations around the country were under tight control with access due to the pandemic.

So they had to shift within days just to keep the show alive. Just 84 days ago, they talked about it putting the show under civilian control at the waterfront, and then 60 days ago, they made a final decision to go ahead.

That meant a lot of logistical planning with numerous agencies such as the Coast Guard, New York State Police, and the Buffalo Police and Fire departments to pull it off.

The Buffalo Waterfront Management Group, along with the state-run Erie Canal Harbor Development Corporation and New York State Parks, jumped in to help work out details such as parking.

It was also decided that some of the proceeds from the more expensive ticket sales will be donated to the Buffalo and Erie County Naval and Military Park to help with the ongoing effort to help repair and save the ship USS The Sullivans at the park.

So the show, which sold out, did go on, with many including volunteers working together.

And then on Saturday, the fog rolled in to cause show managers to abbreviate the show without the star performers: The U.S. Navy's Blue Angels pilots in their FA 18 Super Hornet fighter jets.

Canetti says, "We were all crushed. Most of us didn't sleep that night, people were pretty upset. And yeah, so being able to get as many people down here to see what they saw, we'll take what we get."

They got over 11,000 paying attendees over the two days. Again, some returned Sunday when it was decided they could use their Saturday tickets for general admission. Many specifically came back for the Blue Angels, who got fogged out for their high-speed, tight maneuvers.

And while traffic seemed to jam up at times on the Skyway and at the waterfront, the actual airshow got a thumbs up from those watching.

Thunder on the Buffalo Waterfront, Day 2

1 / 12
WGRZ
The Thunder on the Buffalo Waterfront held its first show on Sunday June 20, 2021. Unlike Saturday, the weather cooperated on a sunny Father's Day.

One of those watching said: "It's the best they could do, really. I mean, they tried to put on something. You can't control the weather, (you) really don't want the pilots who are doing the maneuvers (where) they're going to be in a situation where it's not safe for them."

But what about the lakefront setting instead of the airbase? There are some mixed reviews on that. One woman who traveled here from Ohio said, "Who doesn't like the sun and the water? And then you put the jets in with it? Yeah, absolutely."

But another man who told us he has been to various airshows pointed out: "It's a lot different. I'm used to having it at the airbase. You could walk through all the other aircrafts, take pictures with the pilots, pictures of other aircraft."

Also, there were no food trucks with the state and COVID. But many in the crowd did in essence tailgate like a Bills game

Canetti said, "I understand that it is really cool to be interactive with the static display aircraft we have up there, on the ground displays, and there's no denying that. It's a different kind of show, so out here on the water, the backdrop is unbelievable."

Canetti also points that many other Great Lakes cities, from Cleveland to Chicago to Toronto, do waterfront airshows. With deployments or other circumstances, the airbase can't always host it.

So for the future, he points out: "The last airshows were held in 2011, 2015, and 2018. So why not sprinkle in a couple on the Outer Harbor in between those years when we're not doing it at the base?"