A car owner is thankful for an anonymous sixth grader who left a note on his car after it was hit by her school bus, and his public effort to thank her –through a viral tweet- is expected to result in an in-person meeting. 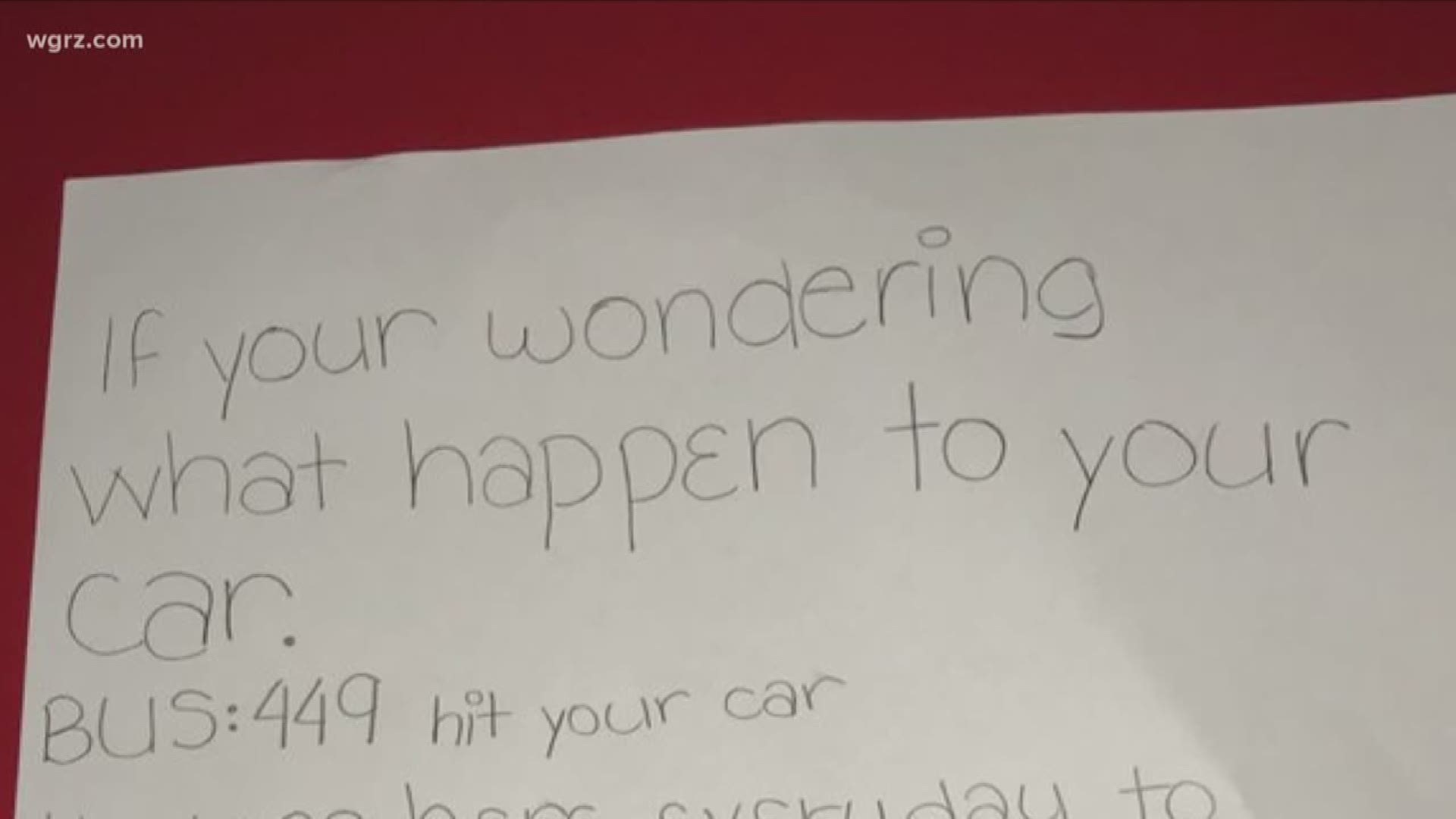 BUFFALO, NY – Andrew Sipowicz is a Canisius College senior who parked his car along Blaine Avenue Monday, only to return just after 5pm to find it had been damaged.

“The front driver’s side was mashed in,” Sipowicz told 2 On Your Side.

Then he noticed a note on the car, neatly hand written, which began with the words: “If you are wondering what happened to your car…”

The note went on to say that “Bus 449” hit the car and went into further details of how the mishap occurred.

It was signed only by, a 6th grader who attends Houghten (sic) Academy.

It also had a drawing of the bus, which the student said dropped her off at that location every day.

“My first thought was thank God for the note because without the note I wouldn't have any idea of what happened," Sipowicz said.

Armed with the information, Sipowicz contacted First Student, which operates the school buses contracted by the Buffalo Public Schools, which got a supervisor there in less than 30 minutes.

“He came out and was very quick and very apologetic and said they would take care of it," Sipowicz said.

At the urging of some friends, Sipowicz tweeted, "A shout out to the anonymous sixth grader for saving me a couple thousand," and attached pictures of his damaged car and the note left behind.

He had no idea how many times that "shout out" would echo through the ‘twitterverse’.

"I thought it would get a hundred or maybe two hundred likes…within the first hour I think I was over a thousand," Sipowicz said.

Shoutout to the anonymous 6th grader for saving me a couple thousand (Bus not drawn to scale) pic.twitter.com/7aNK10xSwX

Among those who saw his tweet, according to Sipowicz, was a teacher at Houghton Academy, who showed it to another teacher who quickly recognized the near perfect penmanship

“The teacher said immediately that they knew who the student was,” Sipowicz told Channel 2. “I have been in contact with that teacher this morning and we're trying to set up something so I can go thank the student in person. I think it takes a special person to be able to do something like this…who felt like they had to do the right thing and I'm very grateful for that. ”

First Student sent the following statement, indicating the driver involved will be terminated:

Yesterday, when we were made aware of the incident we jumped into action. The First Student team met the owner of the sedan to review the damage and initiate our insurance process. We will cover the full cost of the repair to his vehicle as well as a loaner while his car is in the shop. The actions of our former driver are completely contrary to First Student’s training and what we stand for as a company. We have initiated the process to terminate the driver.

We would be remiss if we didn’t mention that we are very impressed by this exceptional sixth grader. We commend her for her actions.