If you didn't know it, you'd hardly guess that the pandemic isn't quite over at a large outdoor festival, which one attendee described as a 'real shot in the arm.' 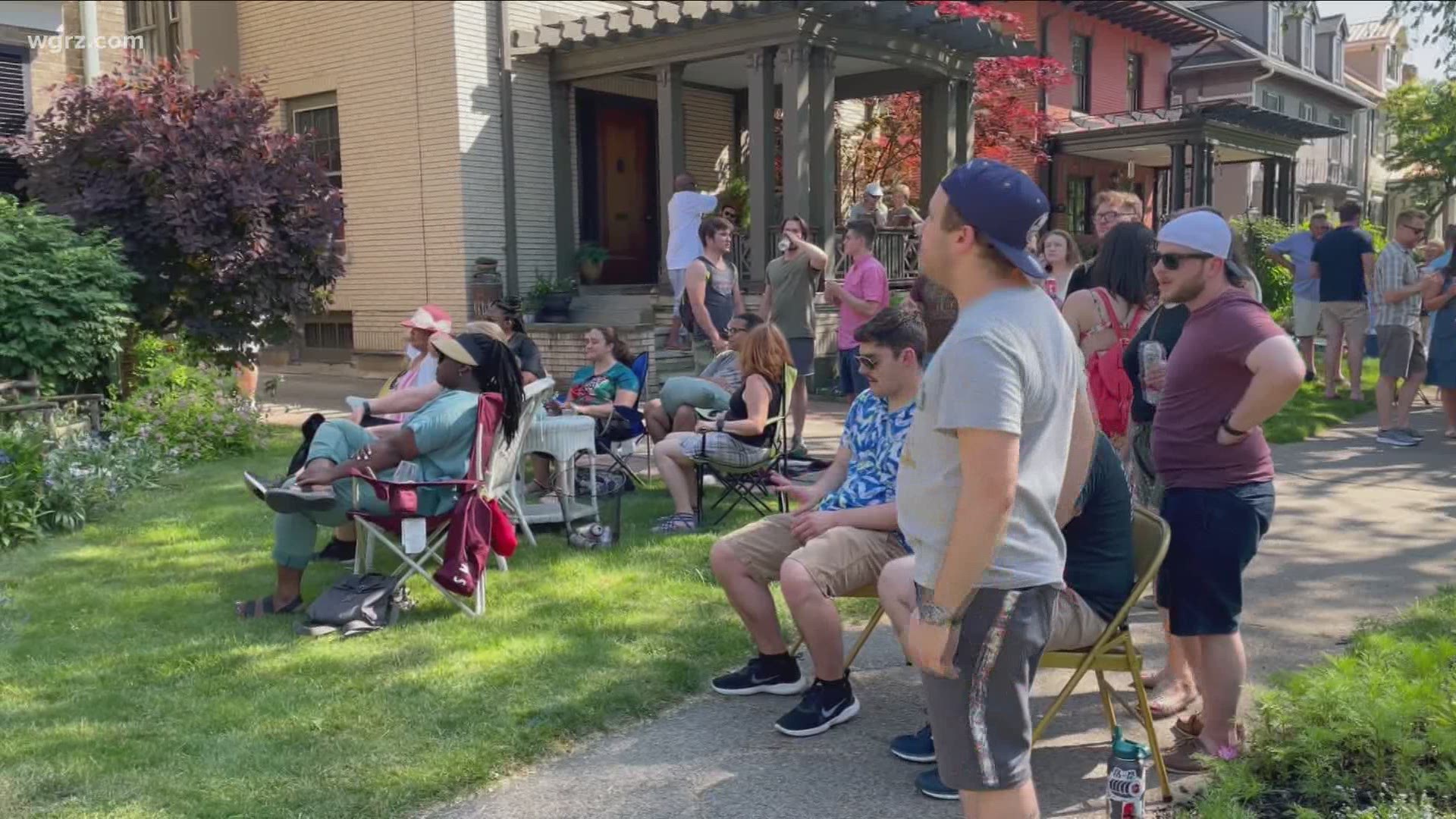 BUFFALO, N.Y. — New York Gov. Andrew Cuomo recently said that when 70% of adults in state have at least a single dose of the COVID-19 vaccine, then most all of the restrictions associated with the pandemic can be lifted.

It’s been a long climb, but based on data reported to the state Friday, the figure is at 69.5%.

It was evident in Buffalo on Saturday, however, that some people aren’t waiting for the governor to wave a checkered flag.

“I have just been ready to get back to normal," said Emma Thompson, who joined the throngs of crowds strolling Elmwood Avenue for the Elmwood Village Porchfest.

Along with the thousands who could be seen along the neighborhood’s main thoroughfare, perhaps an equal number could be observed attending parties on numerous side streets throughout the Elmwood Village.

"I feel very excited that we can be out and about to see each other without a mask over our faces,” said Sherrill Quinn of Tonawanda, who came into the city to join a group of friends enjoying the many musical acts performing at dozens of porch parties.

Current U.S. Centers for Disease Control and Prevention guidance still has it that for large outdoor gatherings, unvaccinated individuals should still be wearing masks.

However, masks were very few and far between among the crowds, which would leave one to presume that either an abnormally high percentage of attendees had been vaccinated, or more likely, many have moved on to deciding for themselves what is best for them.

"It’s definitely weird to see,” James Quinn said. “You're kind of trusting everybody, but it's all in good spirits so far, at least in my experience."

Some who were not wearing masks said they still keep them handy.

“I have my mask,” said Kelly Masters, producing one in her left hand. “So, if I get into a crowd other than with my family, I can put it on because I think we still need to be careful while we’re out here having fun."

As often as he talked about returning to normal, Governor Cuomo has often included the phrase “new normal” when describing the post-pandemic state.

“I think that means that people will still reflect on the pandemic and proceed cautiously,” said Delious Thomas, who while enjoying the atmosphere of Porchfest told WGRZ-TV that he had just moved to the Elmwood Village as the pandemic struck in the spring of 2020 and had felt that he had never been able since to experience “the real Elmwood.”

“I think people are going to be worried more about airborne illnesses," he said.

Thomas also wouldn’t be surprised if mask-wearing does not fade away entirely when the pandemic does, especially during the cold and flu season.

“There are many parts of the world where it has been normal to wear masks (in winter). That wasn’t something that was normal here, but I feel like it’s something that we might pick up,” Thomas said.

As an I.T. professional, he has a strong hunch the way we had to learn to work during the pandemic, also won’t disappear when the pandemic is over.

“Either a hybrid where we're in an office a couple of times a week, or even fully remote in some cases, just because it’s been going well,” he said.

A real shot in the arm

Even if we have not yet reached the point of the pandemic being over perhaps, amid a sun splashed late spring afternoon, being able to say that we’re getting closer was cause enough to celebrate.

As perhaps mostly aptly put by Sherrill Quinn when she remarked, “this feels good … like shot in the arm.”