The shooting happened around 3 p.m. Saturday in the vicinity of Genesee Street and Michigan Avenue. The 60-year-old man is in stable condition at ECMC.

Police say they were responding to a call around 3 p.m. Saturday at Genesee Street and Michigan Avenue.

Buffalo Police Captain Jeff Rinaldo, during a news conference, said the man was at the focus of the mental-health crisis call received just before 3 p.m. They arrived at the scene at Genesee, near Ellicott Street.

One officer with the Crisis Intervention Team was there. The man, identified as Willie Henley, 60, became agitated and started walking up Genesee Street. Police tried to talk him down when, according to Captain Rinaldo, Henley swung his bat.

In response, the officers attempted to use pepper spray. Captain Rinaldo said pepper spray was used within a minute of officers coming to the scene.

At Genesee and Ash, the man struck a female police officer, who has been identified as Alyssa Peron. And when he tried to swing again, the officer's partner, identified as Karl Schultz, shot the man in the abdomen.

Captain Rinaldo said on Saturday that Henley received immediate help at the scene and was in critical but stable condition that night.

On Sunday afternoon, a spokesperson for the Buffalo Police Department said Henley was in stable condition at ECMC. Both Peron and Schultz are currently on administrative leave.

The spokesperson added that Buffalo Police and the Erie County District Attorney's Office will continue to investigate the incident and review body camera footage.

When asked by 2 On Your Side's Jackie Roberts on Saturday about whether the shooting was an appropriate response, Rinaldo replied: "That's going to be part of the investigation."

He said police will evaluate how they responded and how they attempted to de-escalate the situation.

The officer who was struck by the bat sustained a small injury to her arm.

The Police Advisory Board responded to the shooting with a Facebook post on Saturday evening, saying that it "is aware that the BPD responded to a mental health call this afternoon (Saturday, September 12th) and this call resulted in a shooting. We will be making a formal statement about this as we learn more about the situation."

The person who recorded the video can be heard on it saying that the person who was eventually shot was "swinging at cops." Shortly after, two gunshots were heard.

Another person, Angela Amenta, captured the moments right before and after the shooting in the video below. WARNING: Explicit language.

She told 2 on Your Side, "I reacted I think the way anybody would. I was shocked."

Amenta said from what she saw, she did not believe the use of force was appropriate.

"I'm not young and I have seen things, but I've never seen that," she said. "I have never seen a man go down that looked me in the eye 10 seconds ago. He looked at me as he went through that intersection. I saw his face, and then he was down, and I just feel like his aggression was met with force that was not equal."

She added, "I didn't see that man having any deadly force toward them. He was wielding a bat."

"As the investigation continues into the details of today’s incident on Genesee Street, we believe our officers followed Departmental protocols and New York law in responding to an individual who attacked a Buffalo police officer with a baseball bat. The officer was struck repeatedly and was taken to Erie County Medical Center for treatment.

"Officers on the scene, including a member from the Crisis Intervention Team (CIT), pleaded with the individual to drop the bat. Despite these efforts the individual ultimately attacked the officer who was injured.

"The Buffalo Police Benevolent Association has been actively communicating with City officials, members of the Common Council and police administrators to improve police interactions with people with mental health issues.

"This type of interaction is extremely dangerous and can quickly turn into a life or death situation.  Due to these concerns, the PBA is advocating a collaborative process to enhance training and refine protocols to properly address this public health and safety issue."

Mayor Byron Brown addressed the situation in his 1 p.m. radio show on Sunday. It was live streamed on his Facebook page.

"We will implement a comprehensive plan to do more," Mayor Brown said on his 1 p.m. Sunday radio show. It was live-streamed on his Facebook page.

He added that in the coming day or days he will announce new measures and initiatives "when it comes to dealing with mental health situations and community intervention."

For more on Mayor Brown's announcement and comments on Saturday's incident, you can view our follow-up story here: 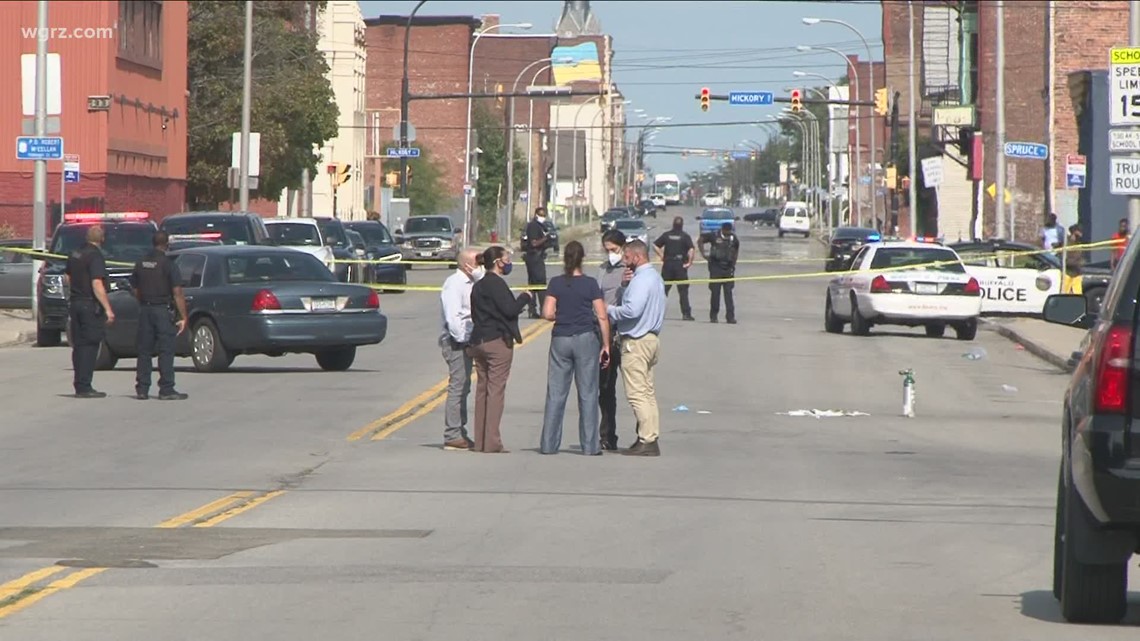 Mayor Brown: new reforms will be announced this week regarding mental health crisis situations
A 60-year-old man was shot by police on Saturday after striking a female police officer with a bat. The mayor discussed the situation on his Sunday talk show. BUFFALO, N.Y. - Buffalo Mayor Byron Brown announced Sunday that reforms in regards to the handling of mental health crisis situations will be shared with the public in the next few days.