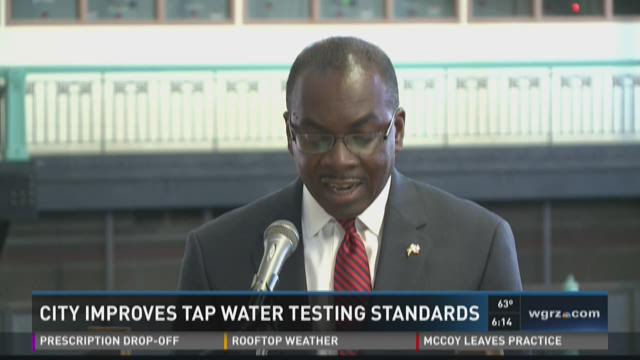 “Still, we know people are concerned and we felt it was imperative that we do more in Buffalo to reassure our residents that we are using best practices and doing everything we can to make sure our water supply and distribution system is safe,” Brown said.

The mayor announced a series of new initiatives that he said go above and beyond what federal Environmental Protection Agency requires water utilities to do to ensure drinking water is safe from lead.

The city will now:
• Sample tap water in homes annually, instead of every three years that is required by the EPA.
• Sample more homes in at-risk neighborhoods in Buffalo’s East and Lower West sides where childhood lead poisoning is more prevalent.
• Test all city-owned buildings with pre-school programming.
• Flag samples that turn up lead at more than 5 parts per billion, which is well below the EPA standard of 15 parts per billion, and work with homeowners to determine the cause and reduce the lead in the tap water.

“We set that as our new action level because it mirrors the industry standard for bottled water by the Federal Drug Administration,” Brown said.

The mayor said later that, “the city will remediate conditions that contribute to results that exceed 5 parts per billion.”

In doing so, Buffalo has one of the toughest standards in the country.

The mayor’s announcement comes two months after Investigative Post reported how disparity, conflicts of interest and using sampling procedures that can lower the amount of lead in tap water plagued the city’s testing program.

Investigative Post analysis found that neighborhoods that the testing program used by Buffalo to determine whether drinking water is safe did not target the minority neighborhoods where the lead poisoning problem is concentrated. Instead, the city focused its testing in predominantly white neighborhoods in North and South Buffalo that report few, if any, lead poisoning cases.

In addition, up to a quarter of the homes the city had sampled in its last round of testing in 2014 were those of current or former employees.

Brown said he was not going to prohibit employees from participating in the sampling program, but assured that more testing will continue to be conducted in at-risk neighborhoods.

“Our goal in this test period was to get to people who were not city employees,” he said. “We had inspectors walking door to door, letting people know about the availability of testing and we went particularly into those ZIP codes where children presented with higher lead levels,” he said.