The new church building for the Tri-Church Parish in Brocton was formally dedicated Sunday as the congregation celebrates the return to services after a deliberately set fire destroyed their old building four years ago. 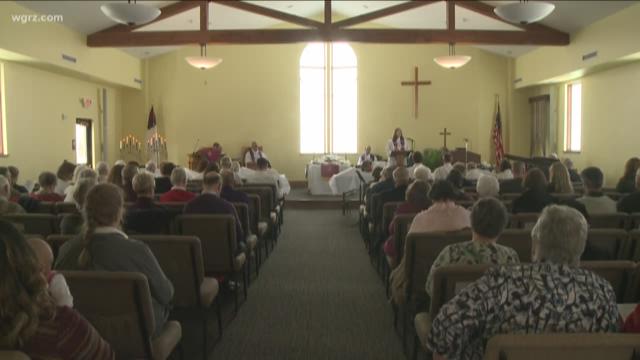 BROCTON, NY — On Sunday, a new house of worship was formally consecrated in the Southern Tier. It's an unusual church with blended denominations and a renewed spirit to serve after a terrible fire that someone started four years ago.

And indeed with a formal dedication service, the Brocton Tri-Church Parish is once again operating for its congregation and the community. It's been over four years since a terrible fire gutted the structure.

Started by a now-jailed arsonist at 1 a.m. on Sunday, November 3, 2013, that blaze destroyed the building which actually held a federated church with three merged congregations, two United Methodist and one Lutheran. Church member Susan Hardy points out, "People who grew up here, who had their children baptized, confirmed, people who were married...this was a devastating blow."

But there was also a determination to rebuild. And just as a cherished cabinet, ornate window and an original cornerstone were salvaged, plans were set for a new church. There was a difficult struggle over the insurance settlement. However, they stayed the course with donated space by another church for services and the arrival of a new pastor..who happens to be a civil engineer.

Pastor Brewer also stressed the spiritual connection of the church over the structure.

The Tri-Church parish also plans a new program to help those suffering from post-traumatic stress disorder.

They thank the pastors and people of St. Dominic Catholic Church in Brocton for providing space for their services for the past four years.