"There are shoulders that are dangerous, not only for pedestrians walking, cycling but also for motorists," said Boston supervisor Jason Keding. 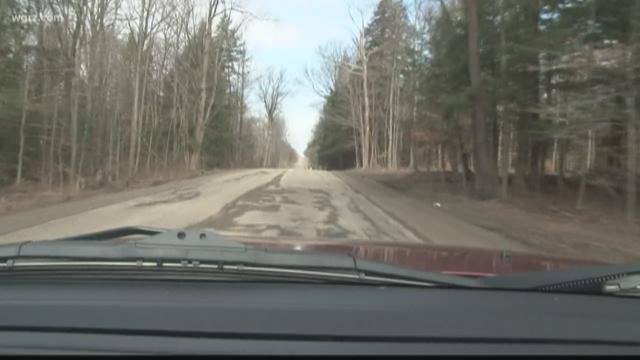 BOSTON, NY - In the Town of Boston, leaders are concerned about two busy roads that are in pretty rough shape, and that are owned by Erie County.

"There are shoulders that are dangerous, not only for pedestrians walking, cycling but also for motorists," said Boston supervisor Jason Keding. He's raising concern about two county roads there: Zimmerman and Back Creek.

Zimmerman has taken a beating this winter — heavy snow, potholes and flooding. Two months ago, a school bus got stuck on Back Creek Road in the heavy snow, and the county admitted back then its plows had problems getting to these roads.

REPORTER: You have no concerns about the county's care of these roads given the issue during the winter and now this?

"I have concerns, with a new administration here in the Town of Boston, I think it's a matter of us working with the county not necessarily against them, but to come up with some sort of solution," Keding said.

2 On Your Side asked to interview the county DPW commissioner, Bill Geary, so we could ask whether these roads will be repaved. They told us he wasn't available.

2 On Your Side did get a statement saying depending on the weather, Zimmerman Road has had patch crews working on it twice a week. But, the county didn't offer a long-term plan to repair these roads.

The county says as many as 2,800 drivers use Zimmerman every day, 1,600 use Back Creek. Supervisor Keding is one of them, and he says he and other drivers want to see conditions here improve.

DPW tells us as of last week, the department used 500 tons of cold patch to repair roads across the county — and that this is as much as the entire last season. About 30 tons have been used on Zimmerman. Between mid-to late- March, the county says it should know which roads will be part of the county's road repair program, and that $30 million will be spent.

2 On Your Side received this statement from Legislator John Mills, who represents the area.

I fully agree with the supervisor. These roads are dangerous for residents in Boston and surrounding communities. I've had several conversations with Supervisor Keding about our shared concerns. That's why when the supervisor wrote me, I submitted his communication to the Legislature, hoping this puts some pressure on the administration. I don't think enough is being done to address the issues in Boston. I will continue my efforts to advocate for these roads to be fixed and I'll continue to support the necessary funding to fix them, it really comes down to what the administration is prioritizing.