A video purportedly showing local deputies and health department workers getting escorted out of an Orchard Park gym has gained a lot of attention. 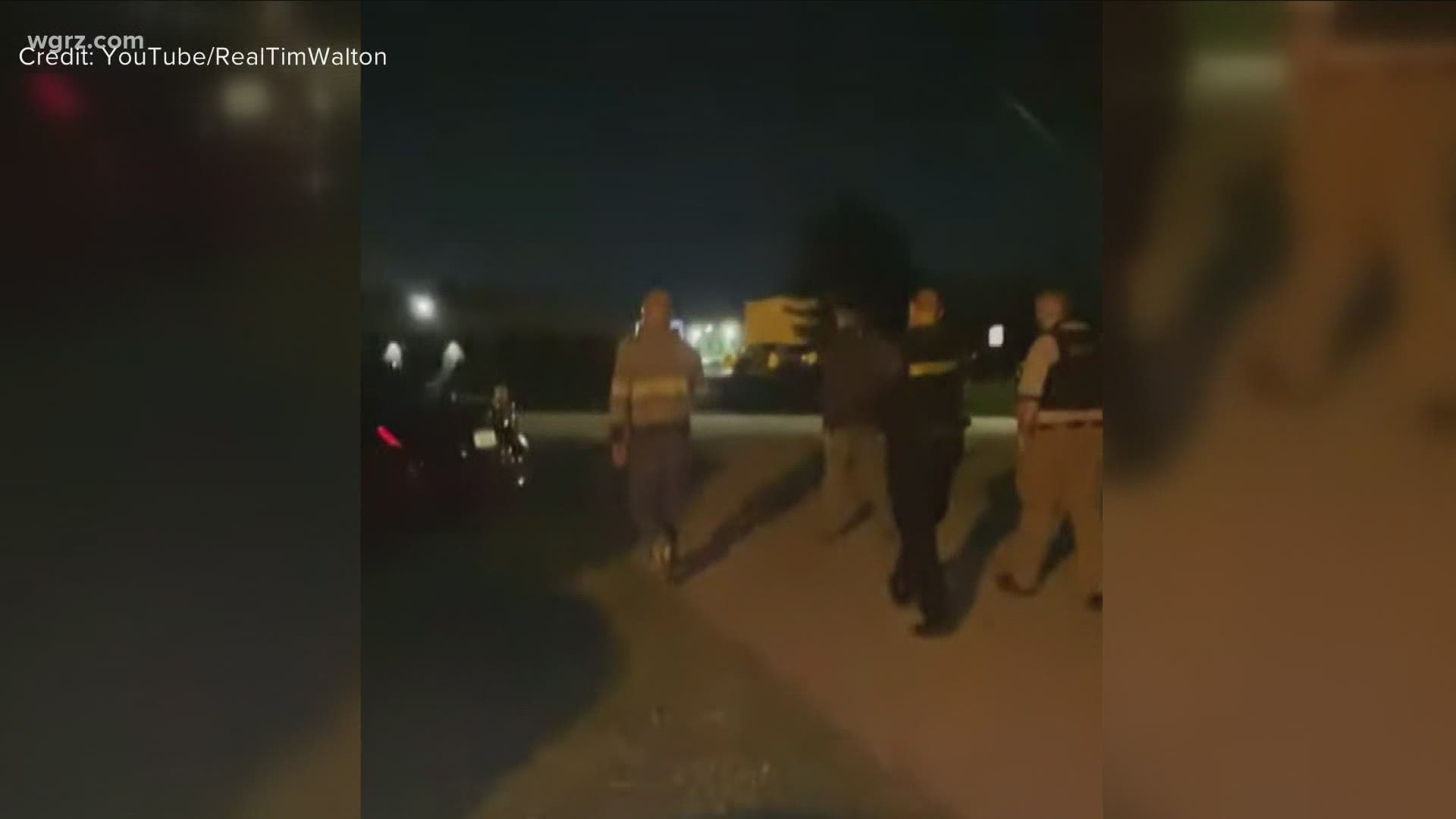 ORCHARD PARK, N.Y. — A video purportedly showing local deputies and health department workers getting escorted out of an Orchard Park gym has gained a lot of attention.

According to a blog post and video shared by Tim Walton, deputies from the Erie County Sheriff's Office and members of the Erie County Department of Health visited a private gym in Orchard Park and were chased out Friday night.

Robby Dinero owns Athletes Unleashed. According to Walton, over 100 Buffalo area business owners were at the gym to brainstorm ways to get through the Orange Zone lockdown restrictions that just went into effect.

Walton says deputies and members of the department of health "let themselves in" and tried to break up the meeting, citing Gov. Andrew Cuomo's rules prohibiting gatherings of more than 10 people.

In an interview with 2 On Your Side, Dinero said, "I am a local business owner. My business is now shut down for the second time, so I posted on Facebook that anybody that wanted to fight back, any other business owners that wanted to learn how we could fight back against New York State, could join me for a protest at my gym."

Dinero said he was overseeing the protest when he was notified that representatives with the sheriff's department and the Erie County Department of Health were in his building.

He said people at the protest told them they were not welcome in the gym and eventually forced them out of the building.

Dinero added that he's now filing a complaint with the sheriff's office.

2 On Your Side asked Attorney Barry Covert for legal analysis.

"The owner of the premises was absolutely entitled to ask the law enforcement and the department of health to leave unless they have a search warrant," Covert said, adding, “there is no COVID exception to the Fourth Amendment requirement for a search warrant with probable cause." 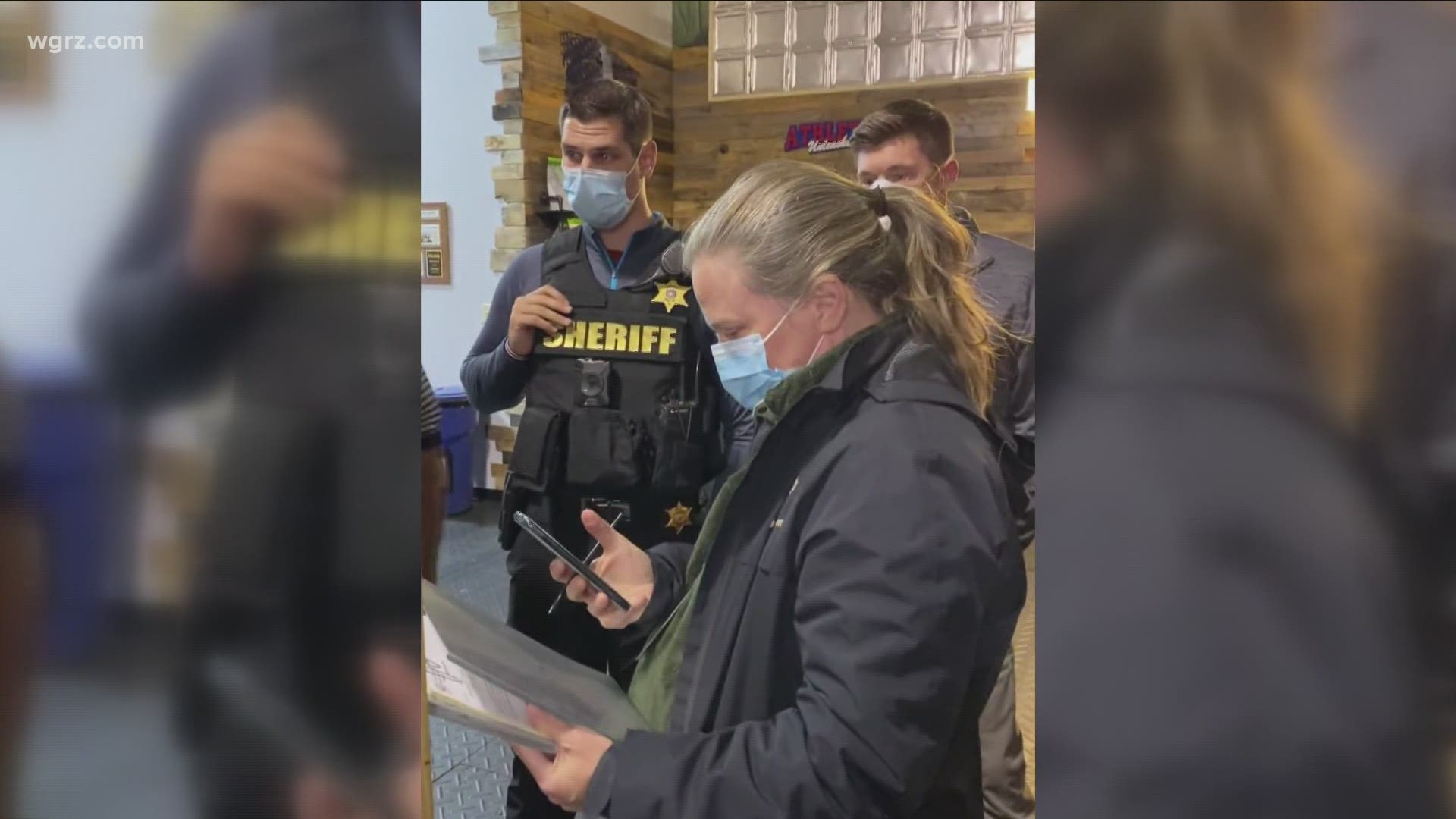 It should be noted that Erie County Sheriff Tim Howard said last week that his deputies would not be used to break up gatherings of more than 10 people; however, his comments were made in regards to enforcement at Erie County homes on Thanksgiving.

In the video someone can be heard saying, "This is private property. You're not wanted here." The video further shows the department of health employees and deputies being escorted to the door with chants of "get out."

2 On Your Side spoke to Dinero back in May when he posted on his social media pages that he intended to conduct classes in defiance of Governor Cuomo's shutdown order for gyms. You can read that story here.

2 On Your Side is working to get comment from both sides. We have also reached out to the governor's office for comment.

The Erie County Department of Health released a statement Saturday morning saying, "We are gathering information and will have more to share in our press conference on Monday."

Erie County Executive Mark Poloncarz addressed the situation Saturday morning on WBEN saying, "Yeah, I got copies of the videos that were sent out. I know that there was a planned gathering at a location. And then based on our health department rules — and we are supposed to follow, because it was a mass gathering — I believe they went out with sheriff's deputies to let them know that would be in violation with the rules. I haven't gotten a full report on it yet, I'm sure I will learn more about it over the next 24 hours."

In regards to COVID-19, Poloncarz added, "This is real and these are the real stories about who unfortunately we are losing in our community due to this terrible disease and that's why our health department is out there enforcing the rules."

You can watch the full video below: