That big debate in the sky: What does the future hold for the Skyway?

Major players differ in views on the future of Buffalo’s venerable Skyway, and with the governor moving to expedite its removal, opponents are raising their voices. 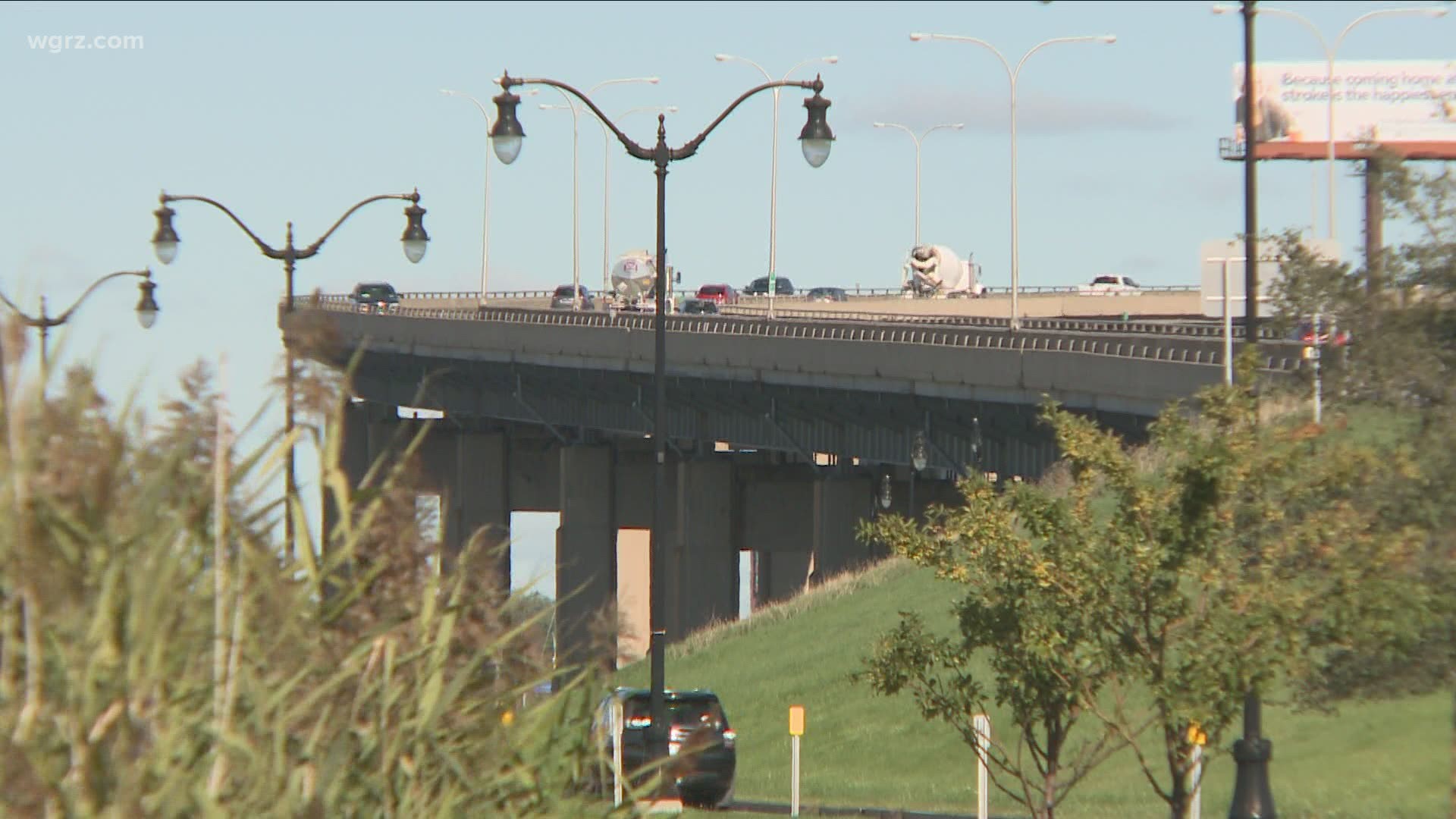 However, he surprised many in the crowd that came to hear him speak by also announcing that he would be putting his powerful voice behind a long-discussed proposal to tear down the Buffalo Skyway.

The 100-foot high, mile-long bridge opened in 1955 and spans the mouth of the Buffalo River near Lake Erie. It was built not only to accommodate the flow of traffic between downtown and the bustling steel mills and other industries that once hugged the shore of the lake along NYS Route 5, but also at a height that would accommodate lake freighters during an era when Buffalo was a key port for cargo ships.

Cuomo also announced his plan for a state-sponsored design competition for an alternative to the Skyway, offering a $100,000 prize for the best design.

The winning entry picked later that year, called City of Lights, would eliminate the Skyway as a bridge for cars and trucks, but preserve the southern half of it to be turned into a lofty urban park.

Prior to Cuomo’s involvement, the most prominent political figure involved in calling for the Skyway’s removal was U.S. Rep. Brian Higgins (D-NY 26), who had beaten the drum for years and was sharply critical of the state for moving ahead with a plan to re-deck the Skyway and preserve its useful life for an additional 25 years.

The state had just completed that project, at a cost of $29 million, when Cuomo began calling for the Skyway’s removal.

While the two powerful Democrats may agree that the Skyway has outlived its usefulness and needs to go, there is a sharp difference in their opinions as to what should remain of it.

“The state of New York is not going to tell us what to do,” said Higgins, who wants the Skyway completely removed and for no part of it to remain, even as a unique urban recreational area, such as a “cloud walk” as envisioned by Cuomo.

“I'm for creating a stunning transformation of the outer harbor which is impossible right now because of the elevated section of Route 5 and the Skyway,” Higgins said.

When asked if it would be possible to have a cloud walk as part of the “stunning transformation” he envisions, Higgins replied, “I don't think so. That’s more of a problem.”

Higgins is a representative in the federal government. But the Skyway belongs to the state.

Still, whatever happens to it, it will rely heavily on federal funding, likely from the multi-trillion dollar infrastructure bill being proposed by President Biden, which, if passed, would mean Higgins' hands, more than Cuomo's, would control the purse strings.

“Typically, 80% of the cost of such projects comes from federal funding,” noted Higgins. “So, what I am going to do with my partners is use the leverage we have to get improvements."

“We think the 'cloud walk' could be transformative,” said Tim Tielman of the Campaign for Greater Buffalo History, Architecture & Culture, which bills itself as Buffalo’s premier preservation organization. “But we must not miss the big picture.”

The big picture, in Tielman’s mind, is 12 acres of land in downtown Buffalo along the inner harbor, which is currently populated by parking lots and bridge pylons supporting the northern half of the skyway and which, if removed, would open the land for housing and other development.

“This is the most historic place in Buffalo,” Tielman said, while noting it was once the heart of Buffalo’s Canaltown district in the 1800s, the remains of which were vanquished 70 years ago to make way for the Skyway and the I-190 expressway.

“Every single house and every single business was wiped off the map, and it began with demolition in 1950 for the Skyway," Tielman said regarding the neighborhood where, by that time, many of the buildings and homes had become derelict.

Tielman led a group that filed a lawsuit a generation ago to save the historic terminus of the Erie Canal below the Skyway from being lost forever, and that effort eventually gave birth to what we now know today as the Central Wharf and Canalside.

“We would like, if the skyway comes down, to use these 12 acres to rebuild these neighborhoods," Tielman said.

The plan his group is pushing is in fact called “The Big Picture” and envisions extending the historic path of the canal through the middle of it.

“We went through a period of madness, a period of urban malpractice. History has showed that approach isn't working, and it's time for something else," Tielman said.

With Governor Cuomo having repeated his stance recently that the Skyway should go and his intent to speed the myriad of processes that would be involved in getting rid of it, there are a growing number of people who are becoming more vocal in their objection to removing it.

“I love the Skyway,” said Rachele Schneekloth of Buffalo, who founded the Skyway Club three months ago as a Facebook group that now has nearly 1,000 members.

She's also behind a Change.org petition that, in one month’s time, is approaching 2,500 signatures.

"We in the Skyway Club are against tearing down the Skyway for lots and lots of reasons,” Schneekloth said.

From the sweeping views drivers get of downtown and Lake Erie as they cross Buffalo's swooping signature span, to the bridge itself, which she finds aesthetically pleasing, Schneekloth suggests that after more than 65 years the Skyway has become as much a part of the community fabric as an Olmsted park.

“It’s part of what makes Buffalo, Buffalo,” she said.

But there’s more than sentimentality behind her opposition to tearing it down.

“You don’t take down a piece of transportation infrastructure that 45,000 people depend on every day. That doesn’t make any sense,” she said.

Moreover, besides the enormous costs involved, she doesn’t think there is a great call for the Skyway’s removal.

“And I think if we were asked, taking the Skyway down would not be a transportation priority in this community," she said.

Though there have been design Charrettes and other forums held to gain public input on alternatives to the Skyway, it seems to Schneekloth and others that this came after certain high profile politicians, notably Higgins and Cuomo, decided the Skyway needed to go, and without any scientific surveys, or demonstrable proof or polling, to establish that a majority of the public agreed.

“It’s like they skipped that step,” said Schneekloth, “which is one of the things we are asking for in the petition. Let’s have a conversation as a city of what we really want to do instead.

“The feeling is that we're getting this jammed down our throats,” Burke told WGRZ-TV.

"It's the congressman and the governor telling us what we're going to do. This has been top heavy. … This isn’t a community decision, and the only community energy I hear on this is opposition. It’s not a good idea and a terrible waste of money,” Burke said.

Schneekloth also rejects Higgins' position that the Skyway and the elevated section of Route 5 south of it stand as an impediment to accessing the outer harbor and its full potential.

“It doesn't bock access to anything,” said Schneekloth, who says she finds the outer harbor to be easily accessible, via the Skyway.

“It’s a literal connection. It's a bridge from downtown to the outer harbor that gets you there in a few minutes,” she said.

The time is ripe or transformative transportation projects

Higgins has said that with the Biden administration's focus on funding transformative transportation projects, the time is ripe to not only remove the Skyway, but also transform the Scajaquada and Kensington expressways from their current status, and to restore the Olmsted parkway system that once existed through those neighborhoods.

However, Schneekloth and Burke see a key difference between those projects and the Skyway.

“If you look at the 33 (Kensington), there is a community group trying to solve that problem, the Restore Our Community Coalition. If you look at the 198, there’s the Scajaquada Corridor Coalition. There’s no community group, organization, or neighborhood group of people who are clamoring to take down the Skyway," said Schneekloth, while noting, “there are no residential neighborhoods that are impacted by the Skyway."

Although, there could be, according to Burke, if the Skyway is removed.

Although some have pitched the Skyway's removal as a way to boost economic development, a 2014 plausibility study by the NY State Department of Transportation concluded that "the value of economic development enabled by removal of the Skyway would be relatively minor and inconsequential to the local economy."

The report also suggested it might have the unintended consequences, of impeding efforts to further attract businesses along the Route 5 corridor, like at the former Bethlehem Steel site, because it would eliminate their direct connection to the I-190 and Canada.

It also pegged the cost of removing the Skyway, the three miles of elevated highway south of it, and building an alternate route to handle the 40,000-plus vehicles that use it on a daily basis, at up to $1.4 billion.

“You have a roadway that works, but you're just going to build a whole new one. ... $1.4 billion in costs after a study concluded would have no economic benefit? That’s crazy,” Burke said.

Nonetheless, the DOT recently revealed that it is considering an alternate route, some 2.6 miles in length and four lanes wide, which would be either an expressway or a boulevard with timed lighting connecting Route 5 at Tifft Street to a new interchange on the I-190 near Baily Avenue.

The route would go through Burke’s assembly district.

“Yes, it would “he said. “And it’s going to affect the people I represent.”

However, as the new roadway would traverse mostly what is now former brownfields and undeveloped land, how much of an impact it might have on nearby residents is debatable, and will be the subject of a future report.