A closer look: Aerial view of where a new road to replace the Buffalo Skyway might go

With Skyview 2 we are looking at where a new road might be built in views you can’t get from below, along a path that is largely inaccessible from the ground. 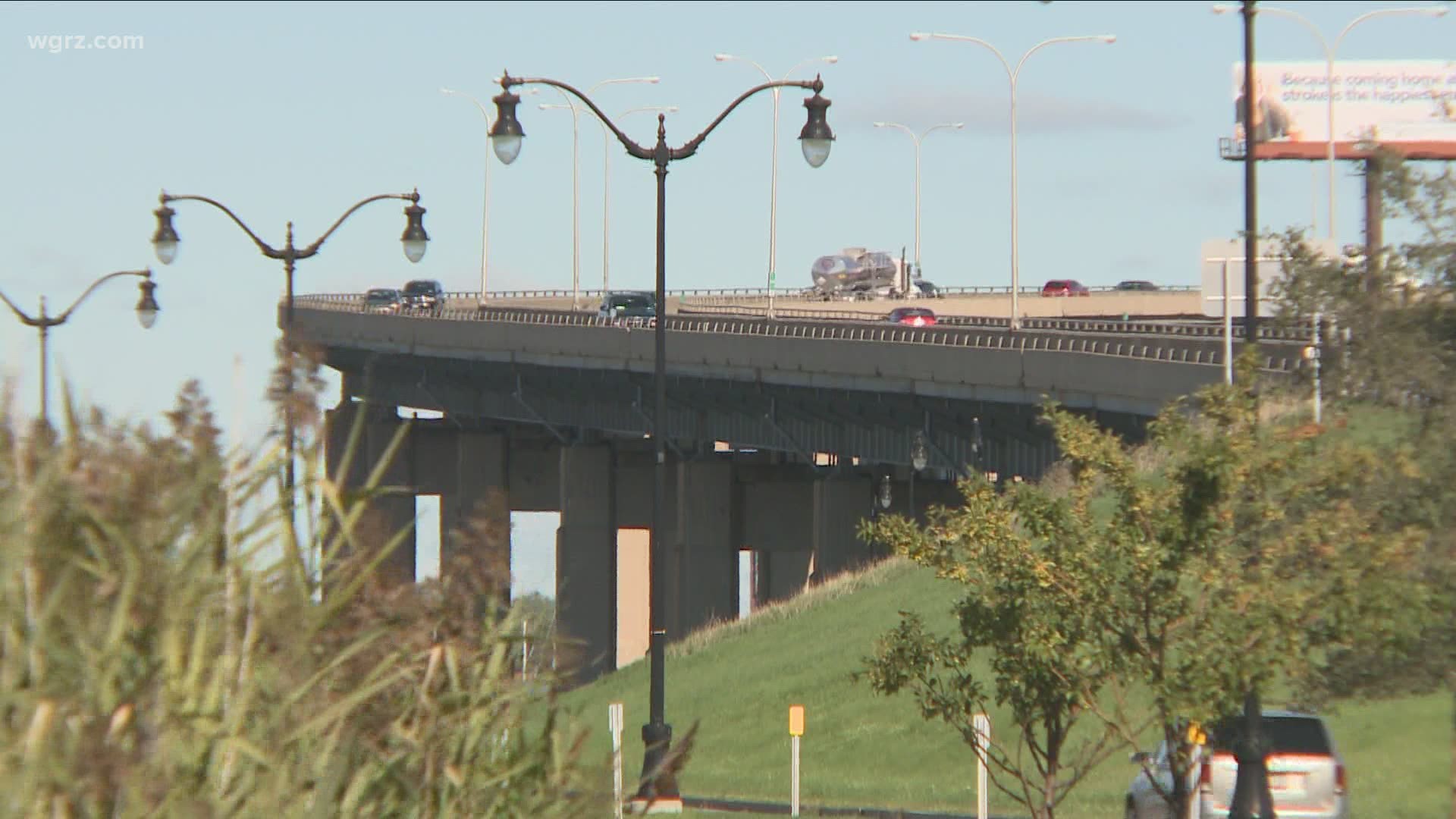 BUFFALO, N.Y. — If the Buffalo Skyway is removed, as some notable politicians including U.S. Rep. Brian Higgins and New York Gov. Andrew Cuomo have called for, a key question becomes where will the more than 40,000 vehicles who use the bridge daily then go?

The New York State Department of Transportation has recently come up with a plan, that would call for the construction of a 2.6-mile alternate route, either another expressway or a boulevard with timed traffic lights, to connect NY Route 5 and the I-190.

Some 2.6 miles in length and four lanes wide, it would run between Route 5 at Tifft Street to a new interchange on the I-190 near Bailey Avenue.

Whichever choice may be settled on will make the trip between downtown and the southtowns lengthier and more time consuming.

Burke’s signature appears on a letter signed by five other members of the Western New York delegation to the State Assembly recently sent to U.S. Transportation Secretary Pete Buttigieg

In it, the lawmakers state: "We adamantly disagree that our priority should be the destruction of the Skyway."

"Outside of the governor and the congressman, nobody wants this and nobody is clamoring for this," said Burke, who calls the concept - among other things - a waste of money just spent.

“We just got done with a $30 million re-decking to extend the life of the skyway another 20 years… about 10 years prior we built an elevated highway to feed traffic into the skyway and redesigning all of that was about $50 million. So, we’ve got $80 million into this over the last 10-15 year period and now we're just like, yeah we're gonna just tear it down? It makes no sense.”

Skyview2 is up and helping us show you the path of the alternate route that may be built if the #Buffalo Skyway is removed. Tonight at 6 on @WGRZ TV 2 pic.twitter.com/k7QOvp7ACp

The Alternate Route Seen Via Skyview 2

If you were to try and set out to hike the alternate route being considered by the DOT you would find that it mostly traverses private property and is pretty much inaccessible from the ground.

However, by using our aerial drone Skyview 2, we were able to fly over the area where the road would be built.

It would hug a portion of the Tifft Nature Preserve, and require the construction of another large bridge over a railroad yard.

The route, which passes primarily through undeveloped land and former brownfields, would got through about 9 acres of existing wetlands and cross over or near to a toxic and industrial waste landfill… which is part of an EPA superfund site not far from the Hickory Woods subdivision near Abbey Street.

Continuing past the eastern side of the Tesla plant, it would cross South Park Avenue toward what would have to be another bridge built to span the Buffalo River, and then pass through the Buckeye Terminal near some large liquid petroleum storage tanks on its way toward crossing Elk Street and eventually to where it would intersect with 190 through the construction of a new interchange..

“This would affect the people in my district," Burke said.

How Much of An Effect Really?

The new roadway, with the exception of a point where it comes within a couple hundred yards of some of the homes at Hickory Woods might not appear, on its surface, to directly impact that many residents.

However, Burke insists that it will.

“Where they’re proposing to build a road it's certainly going to turn up a bunch of industrial toxic waste,” said Burke. “There's environmental health issues... and there are air quality concerns and issues if you have traffic backed up into neighborhoods that will affect those communities."

Rachel Schneekloth, who leads a group opposed to tearing down the Skyway, notes the Skyway currently impacts no residents at all.

“There are no neighborhoods currently impacted by the Skyway,” she said.

She also noted that a 2014 plausibility study suggested that between environmental assessments, land acquisition, and other needed processes, that completing the new road could take six to 10 years.

She also says one only needs to recall what's happened when the Skyway has been closed for weather or maintenance.

“Everybody was diverted through the city…and if they take the skyway down that’s what every day will be like."

Unless the new road is built first.

And while might one presume that it would be, when we asked a DOT spokesperson the very simple question of whether that was the plan, we got a rather non-direct response in an email which read:

"Construction scheduling and sequencing are being assessed as part of the Environmental process. That process is still ongoing therefore we are unable to provide any additional details at this time."

Meanwhile Governor Cuomo, who two years ago joined Congressman Higgins in Higgins’ longtime call to have the skyway removed, has indicated he doesn’t want to wait for years to decommission the bridge and turn part of it into a lofty urban park.

"Taking the skyway down to create some cloud walk seems like a vanity project to me," Schneekloth said.

“That’s what this is,” agreed Burke. "It’s about them and not us, and their desire to do something for the sake of saying they can get things done.”

Burke also questioned the wisdom of the governor making a commitment right now for what would be a generational project that would affect the region for years to come.

“This is a governor who is mired in scandal,” Burke said. “There is an impeachment inquiry on the governor right now, and while has yet to shake out, should he be making these long term decisions for the Buffalo and Western New York in terms of long term  capital projects right now?"

The 2014 report which concluded removing the skyway would bring no significant economic benefit, also put the cost of removing it and 3 miles of elevated highway south of it and building an alternate route at up to $1.4 billion

The 2014 report also estimated that once the deck replacement was done on the Skyway, the additional amount needed to maintain it for the next 20 years might be $30 million, which is drastically less by comparison.

“We’re going to take up to $1.4 billion and do a project because two people want it and it has no economic benefit for any of us,” said Burke, who with other lawmakers, in their letter to federal officials, suggest there are much more urgent transformational projects to address.

These would include the replacement of the Scajaquada and Kensington expressways, both of which have garnered strong support from neighborhood groups.

Higgins has suggested that all three projects could be accomplished with a federal administration more keyed in to transportation infrastructure projects, and if President Biden’s multi-trillion dollar infrastructure bill is passed by Congress.

“Even if the money was there it doesn’t mean removing the Skyway is a good idea. And it’s not,” Schneekloth said. 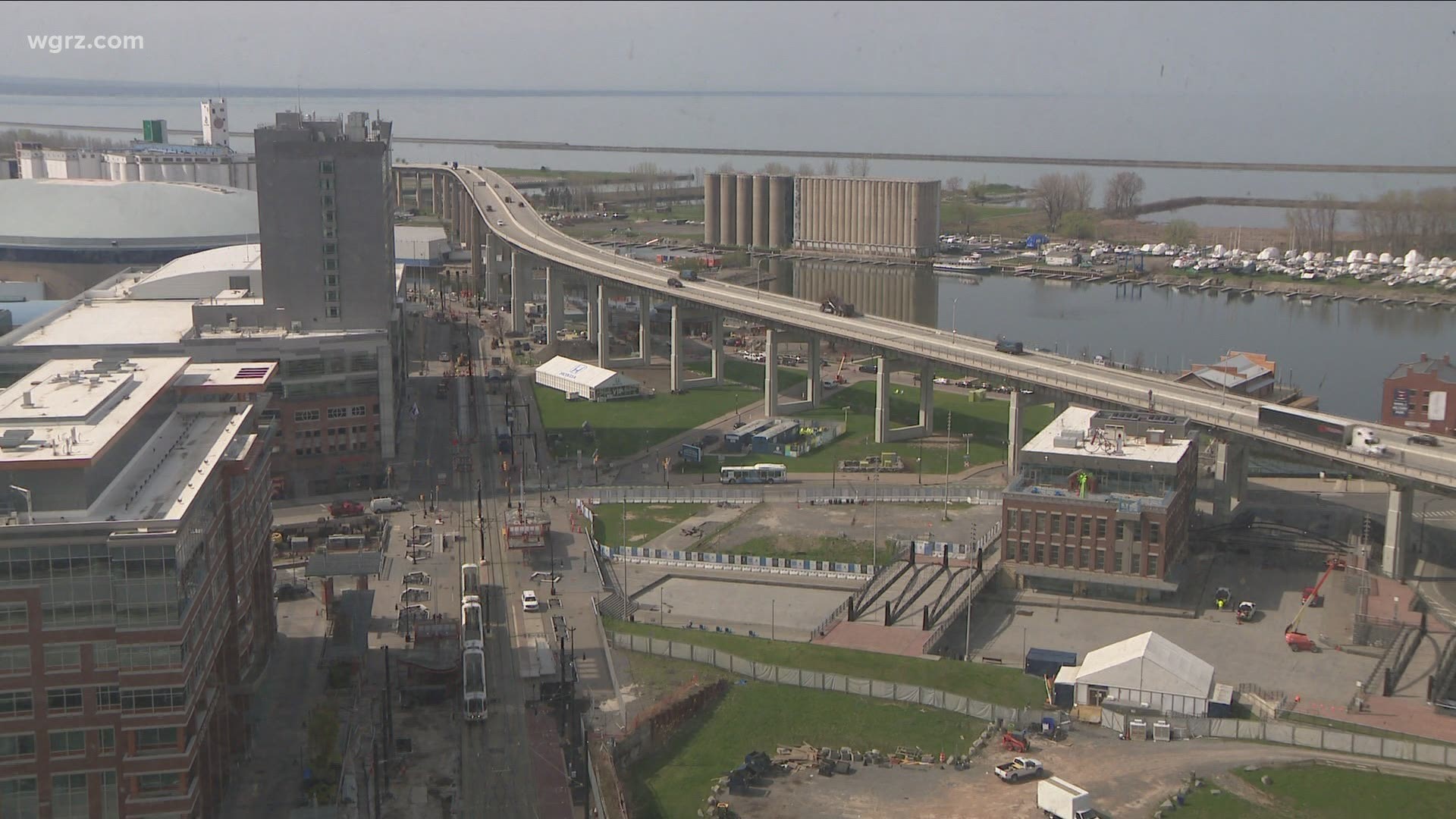