The show's two co-hosts were also suspended for their involvement in the segment. The show remained off the air Thursday morning. 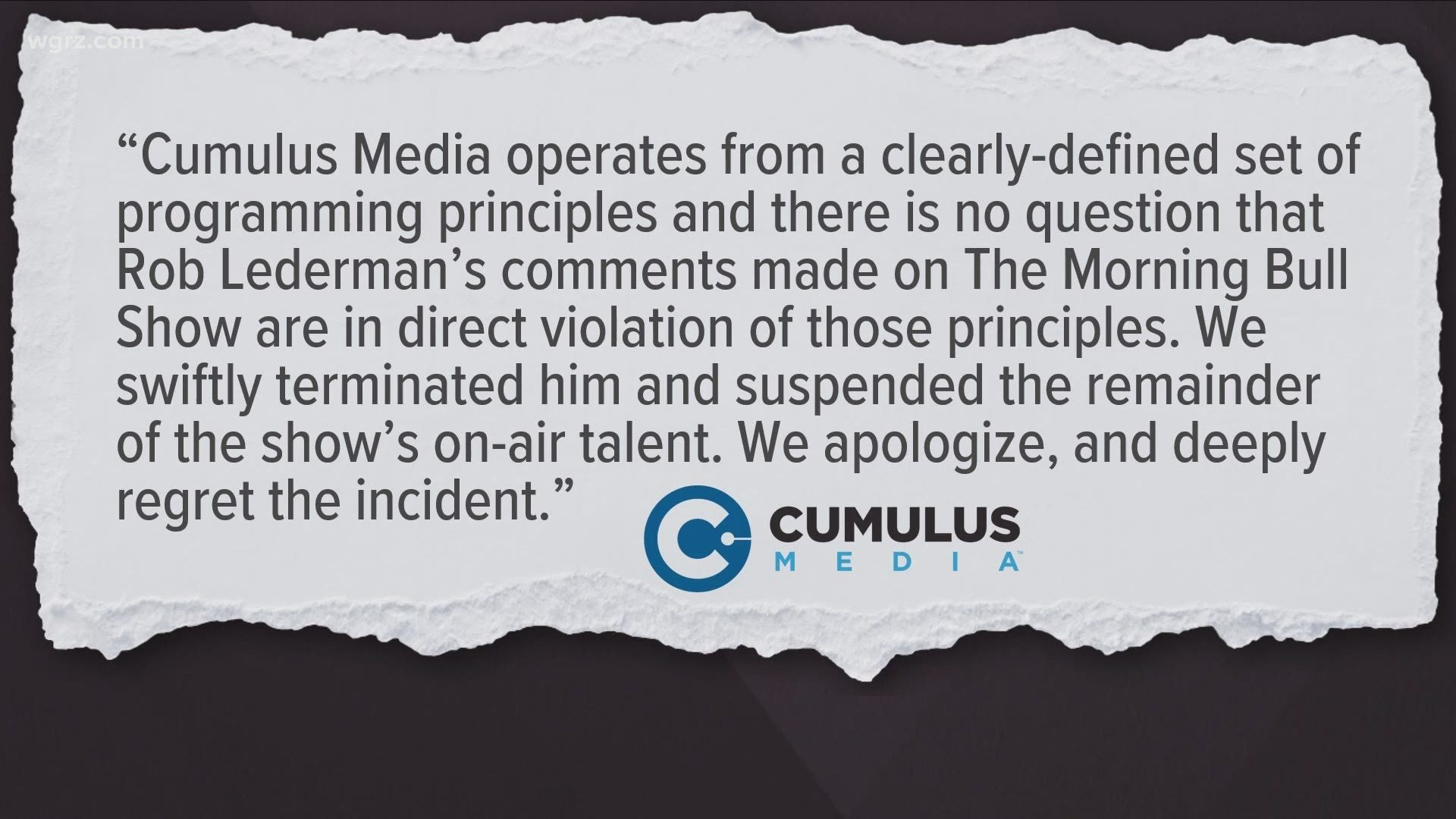 The comments were made on the 97 Rock Morning Show. By Wednesday night, Cumulus Media said it had fired Rob Lederman "and suspended the remainder of the show’s on-air talent. We apologize, and deeply regret the incident," the company said in a statement.

The company added: "Cumulus Media operates from a clearly-defined set of programming principles and there is no question that Rob Lederman’s comments made on The Morning Bull Show are in direct violation of those principles."

Rich Gaenzler was fired by Pegula Sports, which said the comments made on the show were "unacceptable, inappropriate, and there is no place for them in our community. The Sabres and Bandits, therefore, have made the decision to terminate him from his duties as our in-arena host."

Gaenzler was also fired from his position as the public address announcer during football games for the University at Buffalo, which issued a statement Wednesday night:

"The University at Buffalo Division of Athletics is committed to sustaining a culture of diversity and inclusion and strongly denounces racism in all forms. Rich Gaenzler is not currently under contract with UB Athletics. We will move forward with selection of another public address announcer for UB football games next season."

The hosts of the show discussed the skin color of Serena Williams, Halle Berry, and Gayle King in relation to the darkness of toast one of the hosts prefers.

Lederman spoke with 2 On Your Side's Scott Levin after his firing. Lederman was asked what he would say to people who were not listening to the show live but later heard the comments.

"I wish you knew me," he said. "And I wish that you were not judging me by any ignorant comments that I made in an attempt to be funny. That failed miserably."

Lederman was also asked if he thought he might get in trouble.

Lederman posted on his new Twitter handle apologizing for his comments.

2 On Your Side reached out to 97 Rock for comment. They did not immediately respond.

Roswell Park Comprehensive Cancer Center also severed ties with 97 Rock and canceled any future advertisements, including those for the Ride for Roswell.

"We embrace actions that respect the dignity and equity of all people, and forcefully, reject any and all forms of racism," Roswell Park tweeted.

"The racist commentary made on The Morning Bull show on 97 Rock is outrageous and intolerable. There is no place in our society for these statements or beliefs. I strongly condemn what these individuals said on the radio this morning."

A statement from Roswell Park: pic.twitter.com/X5ThVOmzYr

Thursday morning "Morning Bull with Rich and Rob" would have normally began at 6 a.m. Instead, there was music then quick weather updates with DJ Jickster then the music would resume. There was no mention of the show or any other statements from the station.

Coming out of a song by The Clash, DJ Jickster did a quick weather update, teased AC/DC coming up and tossed to break.

No mention of “The Morning Bull Show” or any statements. @WGRZ https://t.co/Ia283Cglzv