Martin Gugino suffered a fractured skull after being pushed over by two Buffalo Police officers. 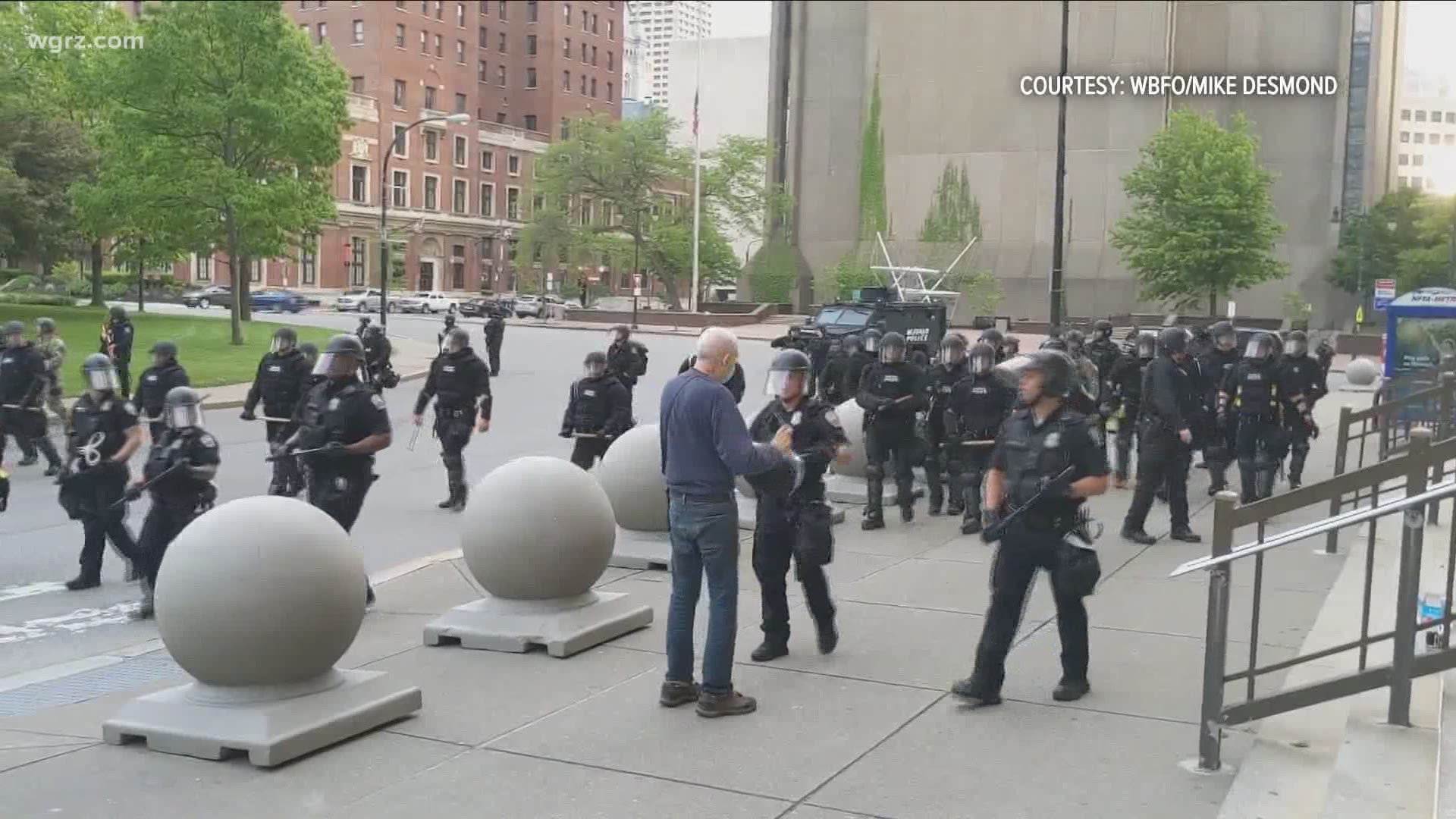 It's been nearly two weeks since the Erie County's district attorney announced a grand jury has dismissed the case against two Buffalo Police officers who were seen on camera pushing over a 75-year-old protester. And now, that protester is suing the City of Buffalo.

On June 4, 2020 Martin Gugino was seen approaching officers in the now disbanded BPD Emergency Response Team during a protest after curfew. The video shows Officers Aaron Torgalski and Robert McCabe shoving him over. Gugino fell to the ground and suffered a skull fracture.

The grand jury dismissed the case and on Monday lawyers from Lipsitz Green Scime & Cambria announced the lawsuit against the city.

Losi is named in the suit with the attorneys' claim. Attorney Richard P. Weisbeck Jr. says, "According to the evidence we have he (Losi) pushed the other two officers in an effort for him to direct those other two officers to then assault Martin Gugino."

They also contend Losi told them to keep moving after Gugino fell backwards onto the sidewalk.

Weisbeck tells 2 On Your Side they hope to "obtain compensation for the severe injuries Martin suffered as a result of being a victim of unlawful police violence."

The lawsuit claims that the city enacted an "unconstitutional and draconian" week-long curfew, one “selectively enforced against peaceful protesters” like Gugino. Moreover, the defendants used “unlawful and unnecessary force” against the 75-year-old Gugino in an effort to “suppress the exercise of his constitutional rights”.

“Let us not forget Sen. Ben Sasse (R-Neb.) recent words,” said Melissa Wischerath, co-counsel for Gugino. “That the five freedoms enshrined in the first amendment – speech, religion, press, assembly, and protest – are clustered together because they are interconnecting. You do not have freedom of speech unless you have freedom of protest. By assaulting Martin Gugino as he peacefully protested in Niagara Square, the City and BPD attacked Martin Gugino’s most fundamental rights as an American. If any one person’s rights are suppressed by the state, it harms all of us by eroding the foundation of our constitution.”

Gugino was taken to ECMC and spent nearly four weeks in the hospital recovering from his fractured skull. He told Channel 2 in October of 2020 that he had recovered for the most part and spoke of Mayor Brown's order for an 8 p.m. curfew. That was put into place after several nights of civil unrest in the city. But Gugino said to 2 On Your Side, "You can't suppress dissent. You cannot suppress dissent. So you can't use a curfew to suppress dissent. It was only really enforcement in that one area for that one thing just to get the people out of there. But you can't do that."

There was no comment from the city with this litigation. A spokesman says only that their corporation counsel will handle the case. The Buffalo Patrolmen's Benevolent Association President John Evans also had no comment saying only that the defense of the officers will be up to them and City Hall in this civil matter.