Erie County officials say there’s an estimated 50,000 pistol permit holders in the county, who have yet to re-certify their weapons, under the SAFE Act. 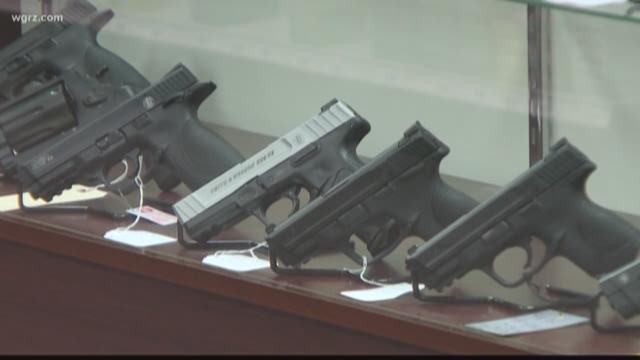 BUFFALO, NY - Erie County officials say there’s an estimated 50,000 pistol permit holders in the county, who have yet to recertify their weapons, under the SAFE Act.

The law requires that anyone who got their pistol permit before 2013 must recertify before the deadline of Jan. 31, 2018.

"In many instances, people don’t even know about this, so that’s why we’re trying to get them out, we’re trying to make it easy for them to recertify," said Erie County clerk Michael Kearns.

And that’s why the Erie County Clerk’s office has programmed on its computers a link, to the State Police pistol permit recertification website.

"So what I'm hoping to do as clerk is give them the tools to comply with the law," Kearns said.

This can be done by either going online or mailing in a paper application to State Police in Albany that’s postmarked on or before the deadline – applications can be found on the State Police website, at any State Police barracks or Erie County Auto Bureau location.

"But remember you want to send it by certified mail you want get some type of tracking number to make sure you comply by the law by Jan. 31," Kearns said.

If this isn’t done by the deadline, police say pistol permit holders will have their permit revoked. And State Police say violators could be charged with criminal possession of a firearm, which is a Class E felony, and could be punishable of a sentenced to probation.

The Erie County clerk and sheriff say 16,000 pistol permit holders in the county have re-certified – an estimated 50,000 still haven’t.

"I just think knowing how serious of a situation this is," Kearns said.

You’re asked to contact State Police if you have questions about the re-certifications.