'Working together to win together': 26 Shirts collaboration will help fund new organization 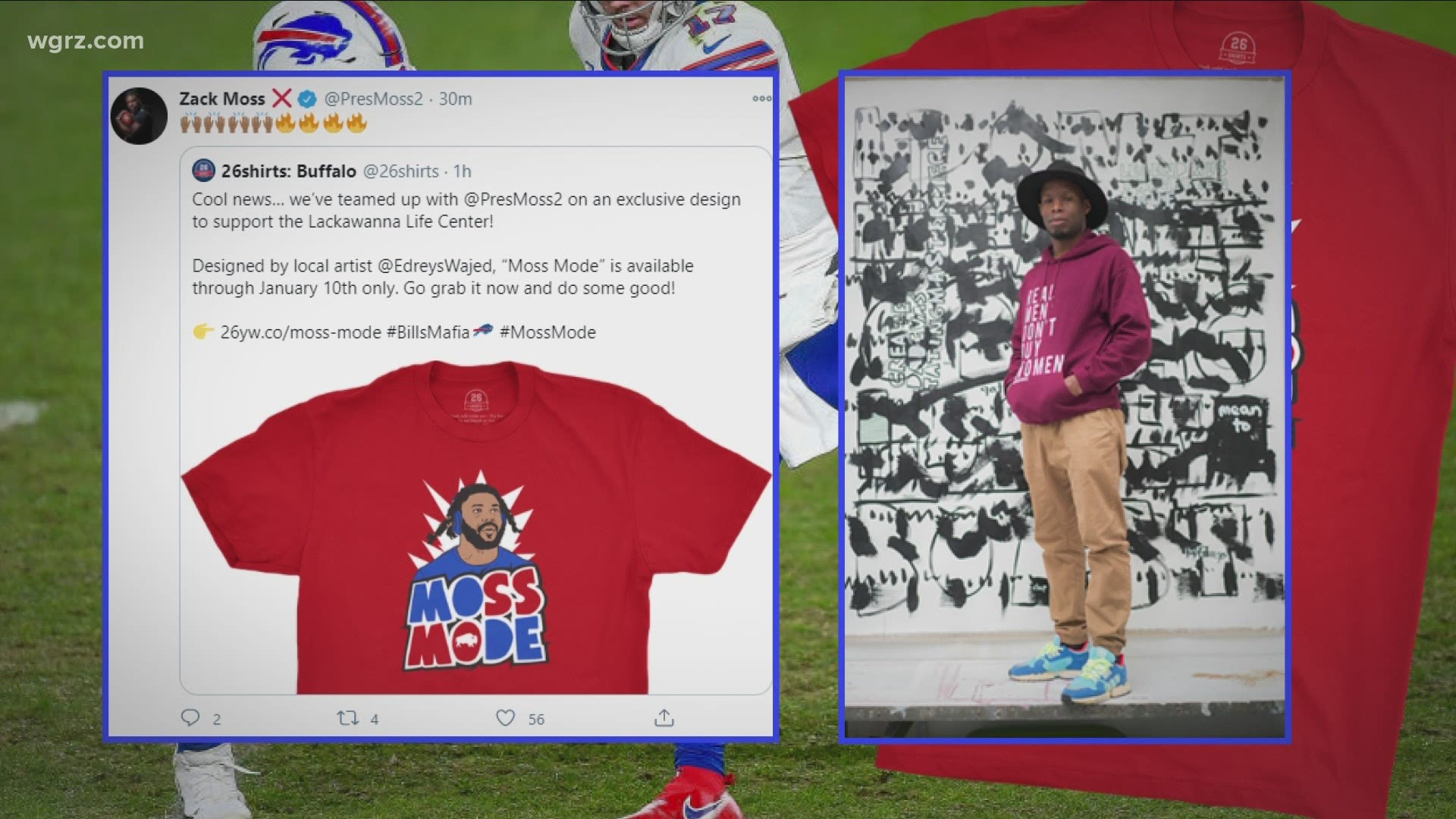 BUFFALO, N.Y. — This holiday season an athlete, an artist, and a Buffalo-based apparel company came together to hopefully change the lives of Lackawanna residents.

The Lackawanna Life Center will have housing, a fitness center and gym, daycare center, and medical facility to help disadvantaged families in the area.

26 Shirts, which produces unique, limited edition shirts, is now offering the "Moss Mode" shirt to benefit the construction of the center.

Buffalo Bills running back Zack Moss says this cause is really dear to him.

Moss says he grew up in Miami, Florida, where churches were central to his youth. Hearing about Mount Olive Missionary Baptist's mission to create the center and about the need in Lackawanna for an organization like this, Moss knew he wanted to jump in and help.

"[Some Lackawanna residents] don't have very much, they don't even have a grocery store locally, and to hear something like that is just crazy. Definitely thinking, you know, the year that we're in and stuff like that, and you can just imagine how tough has been for those people," Moss said.

Moss also shared how him and his team felt that with the success they've had this year, this would be the best time to funnel that passion around the Bills into something that would improve the community. And that's where local artist Edreys Wajed comes in.

Cool news… we’ve teamed up with @PresMoss2 on an exclusive design to support the Lackawanna Life Center!

Designed by local artist @EdreysWajed, “Moss Mode” is available through January 10th only. Go grab it now and do some good!

Wajed and his family have been turning passion into progress for the Buffalo community for a while. Wajed and his wife, who is a chef, run "Eat Off Art," and their teenage son, Emeka "Mek," is a talented multimedia artist who is known for his hand-painted shoes.

Wajed says that projects such as the 26 Shirts "Moss Mode" collaboration falls right in with what his family aspires to do.

"We're all about putting positive energy, and putting our efforts toward uplifting people in the community. So we share of ourselves, we share the things that we create, and we're always trying to make sure that we're plugged into the community and whatever the community needs," Edreys Wajed said.

The collaboration between the Wajeds and Moss began a short while ago, when Emeka designed cleats Moss wore when the Bills played the Steelers and will now auction off, with the proceeds going to the Lackawanna Life Center.

"However we can be of use and be of service to, you know, to raise the tide is like, that's what drives us. And that's why we're still here in Buffalo, because we believe that Buffalo has the opportunity to really be a beacon and an example of what a city that works together to win together looks like, you know?" Edreys Wajed said.

Edreys and Moss connected and began working on the idea of the shirt, which would feature Moss' likeness and be inspired by Roy Lichtenstein's pop art style.

The whole idea of the shirt, as Wajed told 2 On Your Side, was to capture what "Moss Mode" means: being in "win mode," being determined, and being focused. 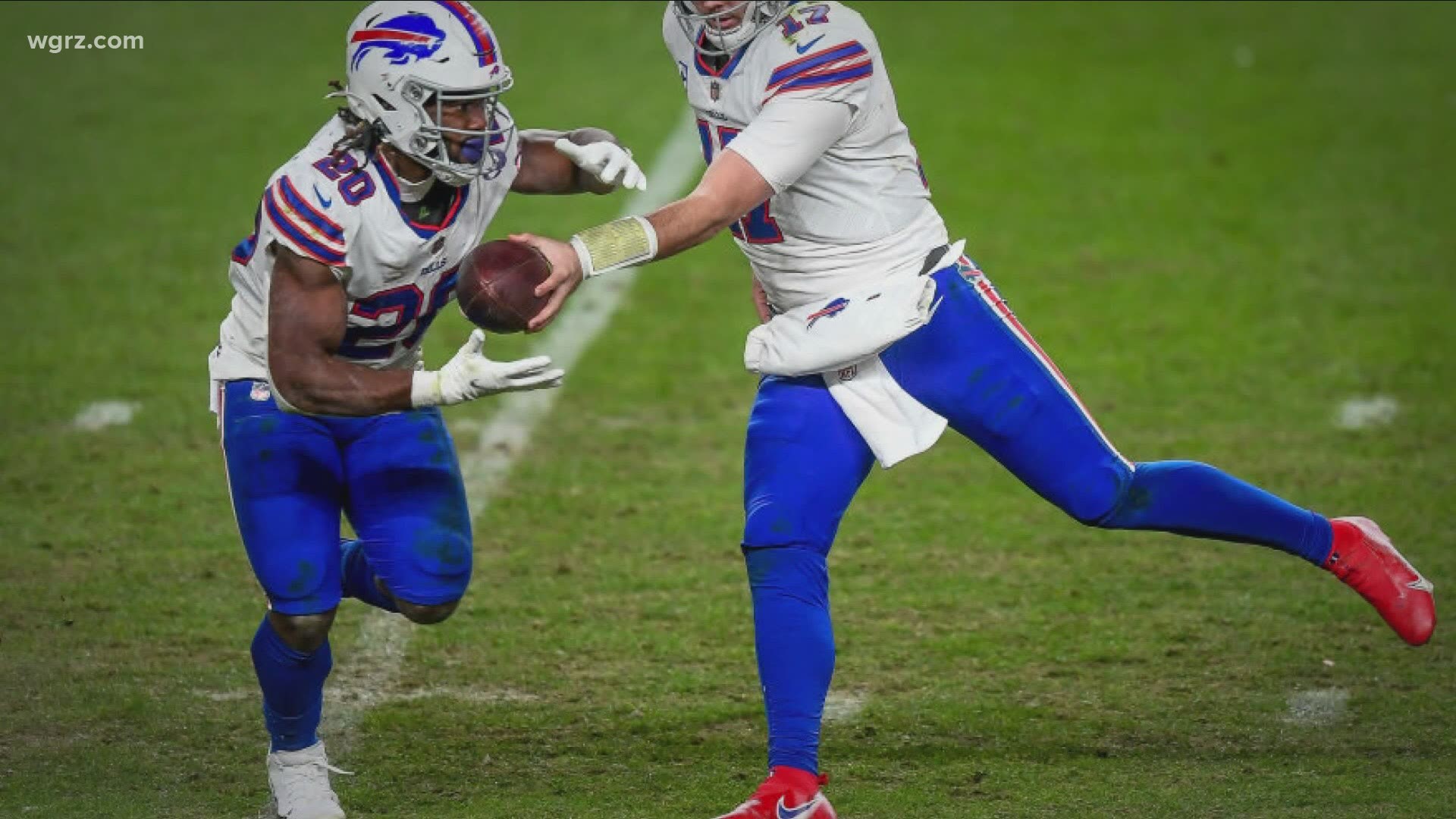 Del Reid, the founder of 26 Shirts, says the project was a no-brainer for his team when they found out about the Lackawanna Life Center.

And for Edreys, having his son work on the cleats, and then having the ability to work on the shirt, was a great way to connect his family to this cause and inspire young people to make a difference with their art.

He said that him and his wife want the next generation to know "how to move, you know, kind of know what they should be committing themselves to, to things bigger than themselves, and to also be able to invest in themselves for whatever it is that they're good at."

Moss also hopes that the work he's doing, and this collaboration helps inspire young people, especially in Buffalo and Lackawanna, to use their talents and passion to fuel change.

"You don't have to be an athlete or a celebrity, or whatever it may be, you can be, you know, a high school student, your voice definitely matters. People are listening," Moss said.

"It's all about coming together, I think that's the biggest thing, you know, I wear something on the back of my helmet that says, 'it's gonna take all of us' and that's, you know, from social injustice to, things that go on with the health departments, and stuff like that, it's gonna take all of us to, get this world where we want to be, and it's not going to be, a sprint, it's going to be a marathon," Moss added.