Police had said the man was injured when he tripped and fell. However, video from the scene shows the man was pushed by police. 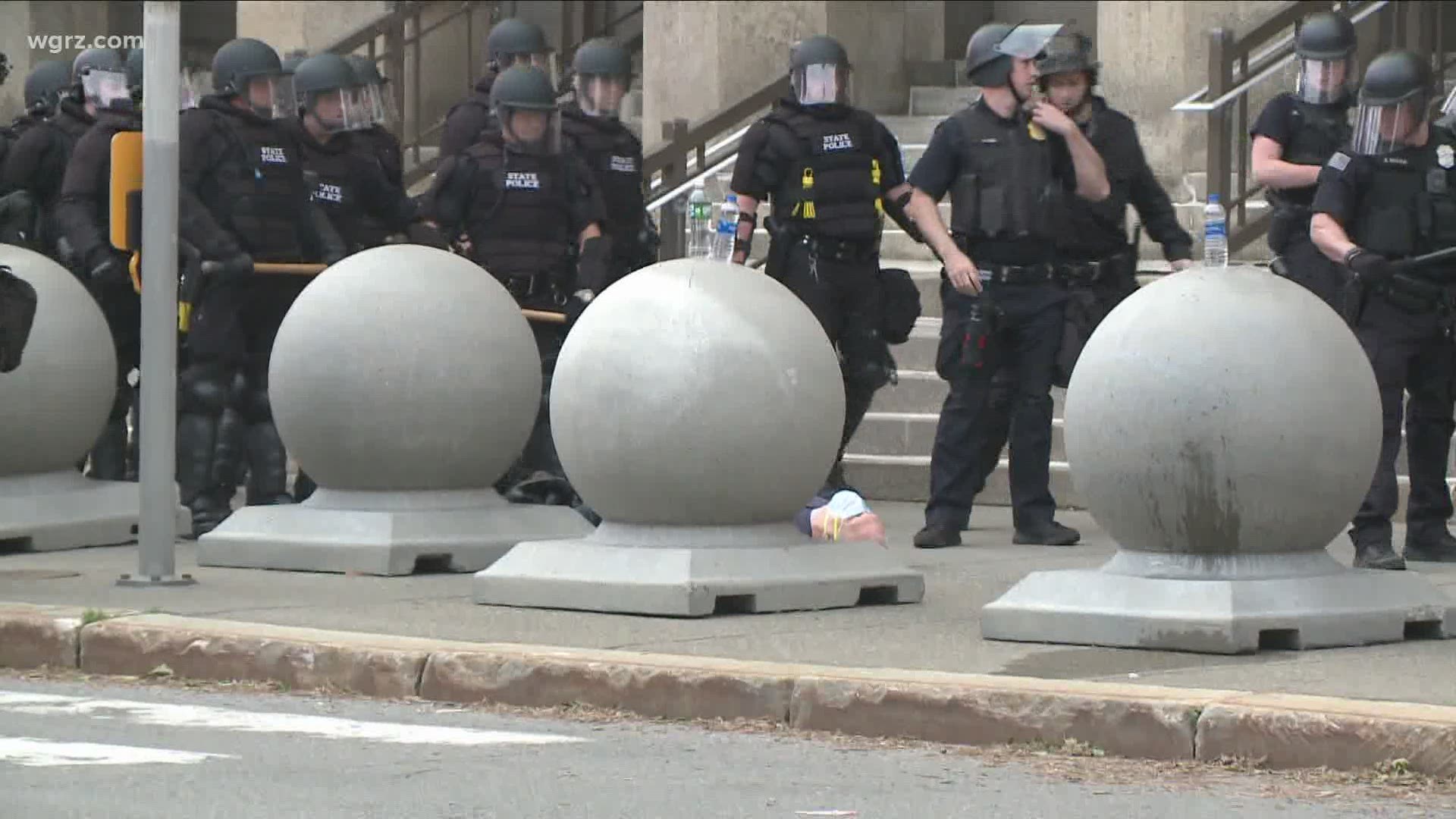 BUFFALO, N.Y. — A man protesting outside Niagara Square was bleeding from his head after he was shoved to the ground by police on Thursday evening.

A police source says the department suspects he suffered a cut to his head and possible concussion.

An initial police statement claimed the man was injured when he tripped and fell in front of Buffalo City Hall. However, video from the scene shows the man was pushed by police before tripping and falling.

Buffalo Police Captain Jeff Rinaldo said Thursday night that the two officers involved in the incident have been suspended without pay.

The man was treated by Buffalo Fire personnel and taken by ambulance to ECMC for further treatment.

Buffalo Mayor Byron Brown released a statement saying that the 75-year-old man is in serious but stable condition and that he was "deeply disturbed" by the video. The man is expected to recover.

"After days of peaceful protests and several meetings between myself, police leadership and members of the community, tonight’s event is disheartening," his statement read in part." I hope to continue to build on the progress we have achieved as we work together to address racial injustice and inequity in the City of Buffalo. My thoughts are with the victim tonight.”

The Erie County District Attorney’s Office continues to investigate the incident captured on video outside City Hall Thursday evening that resulted in the injury of protester. The victim was taken to ECMC to be treated for a head injury. He was unable to provide a statement to investigators last night. We will provide an update as the investigation progresses.

Poloncarz released an additional statement early Friday morning saying, in part, that "the officers must be held responsible for their actions, not just fired."

Governor Andrew Cuomo called the incident "wholly unjustified and utterly disgraceful" and said he'd spoken with the mayor as well.

New York Attorney General Letitia James also tweeted that she is aware of the video.

U.S. Senator Chuck Schumer said through a statement that "the video was deeply disturbing and the actions taken were wrong. We need a prompt investigation and full accountability."

“The casual cruelty demonstrated by Buffalo police officers tonight is gut-wrenching and unacceptable. Suspensions and an investigation are already in order, but there is little more we have to see to know what took place," Buffalo Chapter Director John Curr said:

“Police officers cannot continue to hide behind the lie that they are protecting and serving. City leaders need to take this as a wake-up call and seriously address the police violence during this week’s protest and the culture of impunity that led to this incident. There is no place for military-geared police to enforce a curfew by inflicting violence on the very people they are supposed to protect.

“We are in solidarity with Buffalo’s protesters and demand that demonstrators can protest without the threat of police brutality on the streets tomorrow."

Congressman Brian Higgins also released a statement about the incident.

“The completely unwarranted use of force by police in front of Buffalo City Hall last night is a call to action for our city and country. Videos are exposing unchecked bad actors and the painful truth of what has been happening in our communities for far too long," Higgins said in a statement. "George Floyd’s murder has led to a nationwide outcry for change. This unacceptable incident right here in our community — and others across the country in the wake of this tragedy — shows how widespread and urgent of a change is needed. The House of Representatives will soon release a legislative package led by the Congressional Black Caucus addressing equal justice and police brutality. There is clearly much work to do. I am eager to work with my colleagues to advance these measures swiftly.”

US Attorney James Kennedy also released a statement showing support for the man who was pushed.

"Last night, after seeing the video of the incident occurring in front of City Hall, I was concerned and immediately contacted both BPD Commissioner Lockwood and FBI Acting SAC Guyton. The officers involved have been suspended pending further investigation. On behalf of the entire law enforcement community, I offer our sincere best wishes to the injured gentleman, as we hope and pray for his speedy and complete recovery."

Five people were arrested as part of Thursday's protests in downtown Buffalo.

On Thursday afternoon, not too long after Buffalo Mayor Byron Brown announced that he would ban the use of chokeholds by police officers, police gave the people there a two-minute warning to clear the streets outside City Hall.

2 On Your Side reporter Leanne Stuck witnessed two people being taken away in handcuffs.

The protesters left the streets, chanting "We want Byron," and police backed away once the road was clear.

Investigative Post reporter Ali Ingersoll reported that police told protesters that so long as they stayed out of the street and left by 8 p.m., which is when the curfew for the City of Buffalo begins, there wouldn't be issues.

The protesters were lined up in the middle of the street across from police, who were dressed in protective gear.

By 6:30 p.m. the protest was on the move. But some of the protesters chose to head back to Niagara Square as the 8 p.m. curfew approached.