Funeral services will be held for a 36 year veteran of the North Boston Volunteer Fire Company who succumbed to complications from Leukemia after a courageous 2-1/2 year battle. 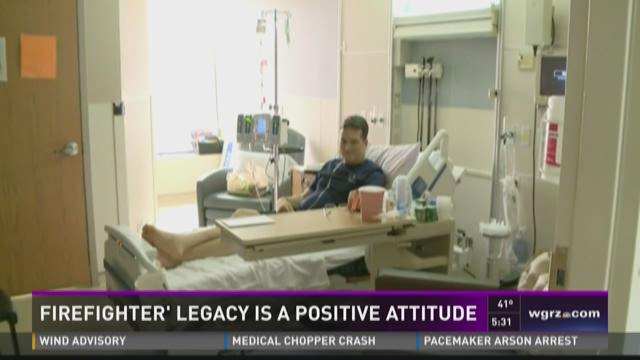 NORTH BOSTON, NEW YORK – Funeral services will be held for a 36 year veteran of the North Boston Volunteer Fire Company who succumbed to complications from Leukemia after a courageous 2-1/2 year battle.

David Blank, a past chief of the fire company, told WGRZ-TV in a July 2014 interview, that to help him stay positive during his initial round of chemotherapy, he wished to receive a tee-shirt from every volunteer fire department in Western New York.

"It would be a pick me up to know that everyone is behind me,” he said at the time.

His touching story on Channel 2 went viral, after being picked up by USA Today and other media outlets.

Eventually, Blank would receive more than 3,000 tee-shirts from fire departments across the country and around the world, including one from NASA and another from a military unit in Afghanistan.

As Blank fought hard through chemotherapy, a bone marrow transplant, and numerous other treatments and complications, his fellow firefighters in Western New York continued to answer the call on his behalf, hosting fundraisers to assist in his medical bills.

“He was one of our brothers. That's what you do," said Tim Ricotta, the current chief of the fire company, who recalled Blank assisting him when he first joined up several years ago.

On his better days over the past 2-1/2 years, Blank would on occasion return to the fire hall and look wistfully at the turnout gear, which had been kept at the ready, for the day he might return to duty.

“We thought he would come back to it someday….we thought…he would always be here,” said Ricotta, his voice faltering as he gathered his emotions.

"He seldom ever seemed down at all, he tried to come to the meetings when he could, he always seemed positive,” said North Boston Fire Company Vice President Don O’Bryant.

Blank made his battle with Leukemia quite public, often posting pictures of himself undergoing treatment.

His last post, however, on January 30, requested one more thing.

Five days later, he passed away, ironically as noted by his wife Colleen, it was World Cancer Day.

Colleen added that her husband’s positive attitude was evident right to the end.

"His last words to his doctor were, ‘Doc, just get me to walk out of here’. Well, he's walking out…just in a different place," she said.

Blank’s daughter Brianna, who herself survived Leukemia after being diagnosed with it when she was 3 years old, says her dad imparted upon her a lifelong lesson.

“Never give up with anything. No matter how small or how big it is," she said. “Go with the flow, take things one day at a time, and be positive about things."

Dave Blank's turnout gear has been assembled as part of a memorial to him at the fire hall, in front of which his hearse will pass after his funeral on Friday.

As for all those tee-shirts, Brianna says she will wear one every day, and post a photo on Facebook, in tribute to her father.

It should take her about 9 years.

Eventually, she says she’d like make them into quilts, perhaps to be donated to a worthy cause.