Differing rules and policies from education and health departments. 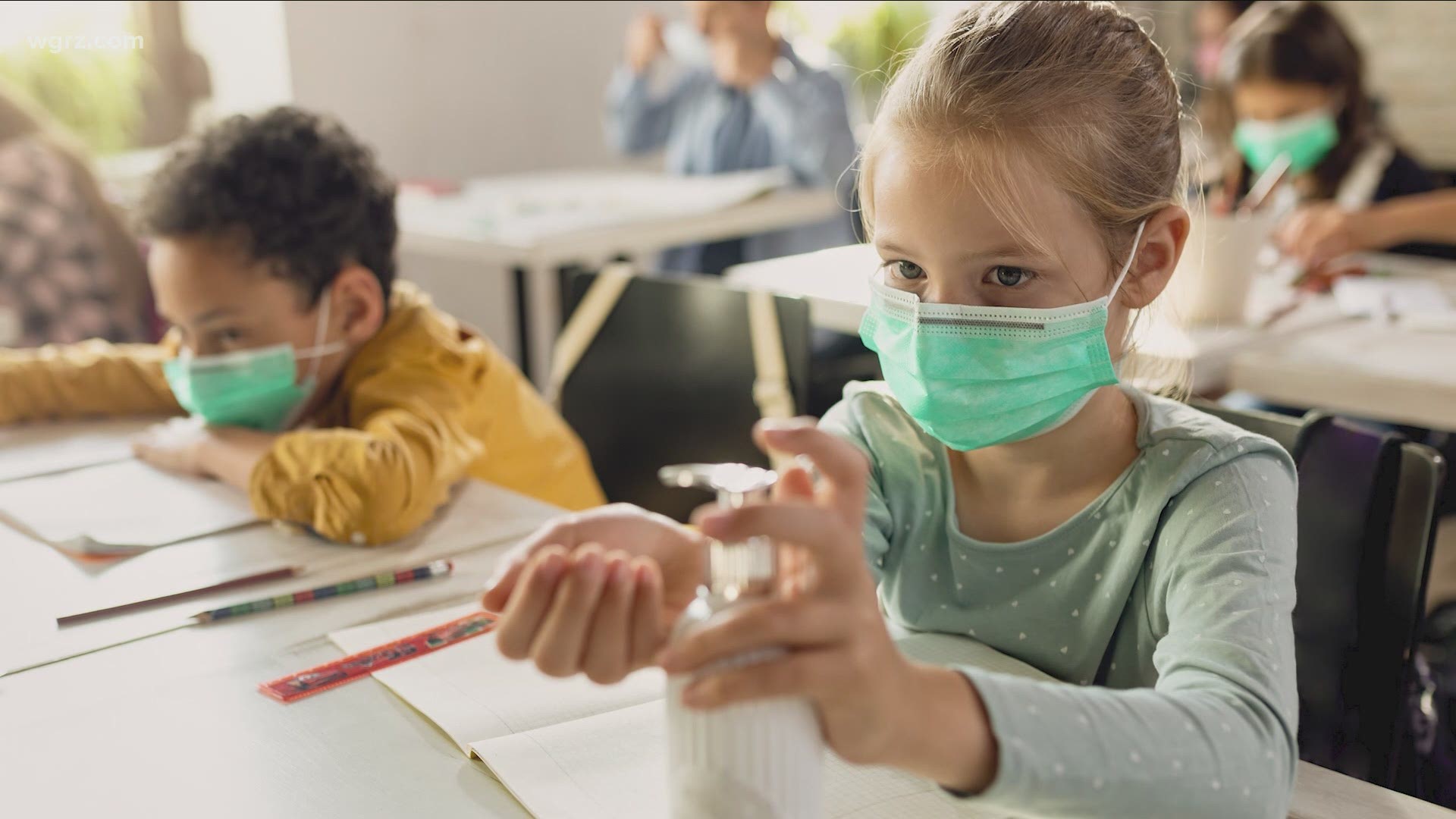 BUFFALO, N.Y. — As more vaccine becomes available and as we see the infection rate going down, there is more pressure than ever to fully reopen schools. But that's not as easy as it sounds for school superintendents as they faced mixed messages at all levels of government.

There were even some cheery, optimistic assessments of the latest CDC guidance for school reopening.

Educators say they hear all that, but they're stuck as well because of that 6 foot rule to keep students apart.

"I would agree the best place for kids to be is in the school," said Niagara Falls Superintendent Mark Laurrie. "We need some support and some help both from the science and from the state to give us that direction to allow this to happen. Until that decision is made to lessen the 6 feet and lessen the 12 feet - our hands are really tied."

Again even the CDC is still saying 6 feet. Also it's a mandated 12 feet of separation in cafeterias and gyms. Hamburg Central School Superintendent Michael Cornell notes that there's a hard reality to face.

"The geography of pretty much any school in New York state precludes you from having everybody in and 6 feet of distance," Cornell said. "Our classrooms and out schools just aren't that big."

"We received an executive order this morning [Tuesday] that tells us tomorrow [Wednesday] - tomorrow we've gotta report the number of teachers vaccinated," Laurrie said. "That's less than 24 hours notice. We don't have the form yet from the Health Department. We don't know how we're gonna report it."

And last summer for the start of the school year there were frequent changes for districts.

"You're constantly getting information, but many times it's in conflict," Laurrie said. "And obviously we follow the governor's direction, but it's often in conflict with the other agencies."

Also Tuesday the word came out regarding statewide assessment testing. In the previous school year both those standardized tests for students in grades three through eight and Regents exams for graduation were put aside as students and teachers had to adjust to remote learning as COVID cases mounted.

There was some thought that may be the case again this school year with hybrid or even totally remote learning for some students, but that is now just partly the case.

The state education department says the U.S. Department of Education has decided not to waive those assessment exams. But in addition the state would push to drop Regents exams as a graduation requirement once again.

Some better news for districts is that the exams will not be used for accountability purposes with student performance affecting a schools ranking. There are also allowances for how students with parents who do not want them to come to school just yet would take those exams.

But Laurrie still questions why have the exams when some students still struggle with remote learning or in the limited hybrid learning.

"It really doesn't make sense," Laurrie said. "What makes sense is to check a student's growth against themselves not against an arbitrary standard that's set by collecting all of the students at a certain grade level. That makes no sense at all."

And Cornell adds, "People should not be under the mistaken impression that we aren't assessing kids effectively over the course of the school year because we are. So it's not as though if we don't do the New York state assessments - how the heck are we gonna know if the kids are learning - that's nonsense."

Laurrie suggests the tests be given in the fall for a fresh assessment with a new school year.

When it comes to overall communications with the state and other local health agencies Laurrie feels there is still a major disconnect.

Cornell says the state did make accommodations on school COVID testing policies. But he and other school leaders are seeking more dialogue instead of edicts. So the Erie Niagara School Superintendents Association wrote a letter to the new state education commissioner requesting more discussion on reopening and other topics.

As Cornell puts it, "We all know that we're not going to be doing hybrid learning for perpetuity. So our job is really not to predict when it might happen or the conditions under which it might happen. But to be ready for it when it happens."