But state officials stick by their claim that 98 percent of the state is connected with high-speed, wired broadband. 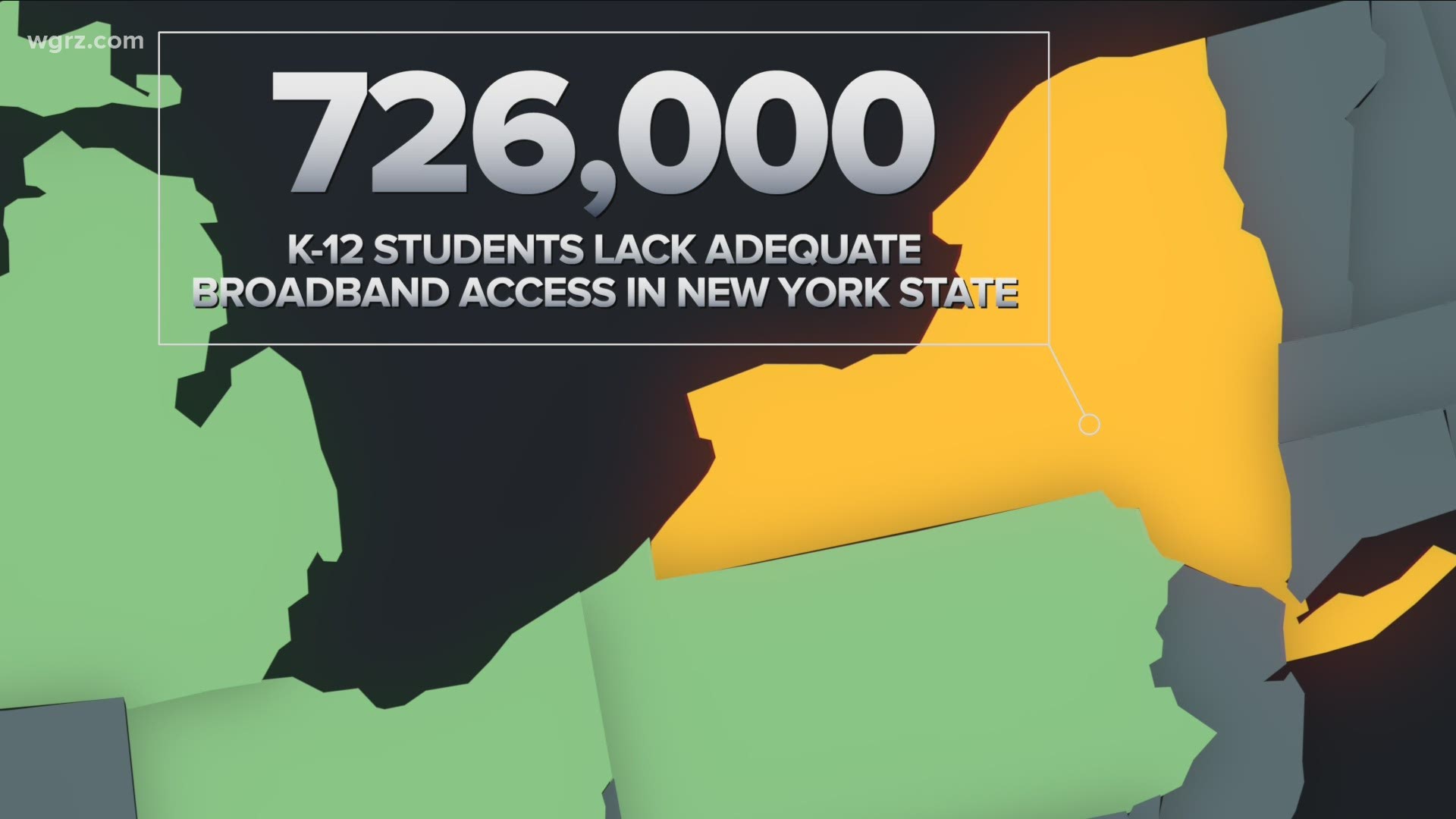 ALDEN, N.Y. — A new Common Sense Media report paints a picture of broadband access in New York State that is very different than the masterpiece the state is painting.

The report, issued Monday, indicates that 726,000 K-12 students in New York State lacked adequate access during the pandemic. That's 27 percent of all public school students in the state.

Additionally, 18,000 teachers lacked access, about 9 percent of the teachers in the state.

"We issued this report based on the most recent available data," said Danny Weiss, a policy expert at Common Sense Media. "In New York, a little more than 1 in 4 children, public K-12 students, don't have adequate connectivity at home at a time when they're being asked to do most of their learning from home."

The report doesn't break down specific county data, but based on our reporting in the past, it's likely that rural and low-income areas of the region show the largest divides.

That is a trend nationally as well.

"In terms of geography, clearly rural areas are less connected than suburban and urban areas," Weiss said. "But overall low-income populations have the least connectivity and that includes low income and black and LatinX populations that have lower connectivity rates, than do white students." 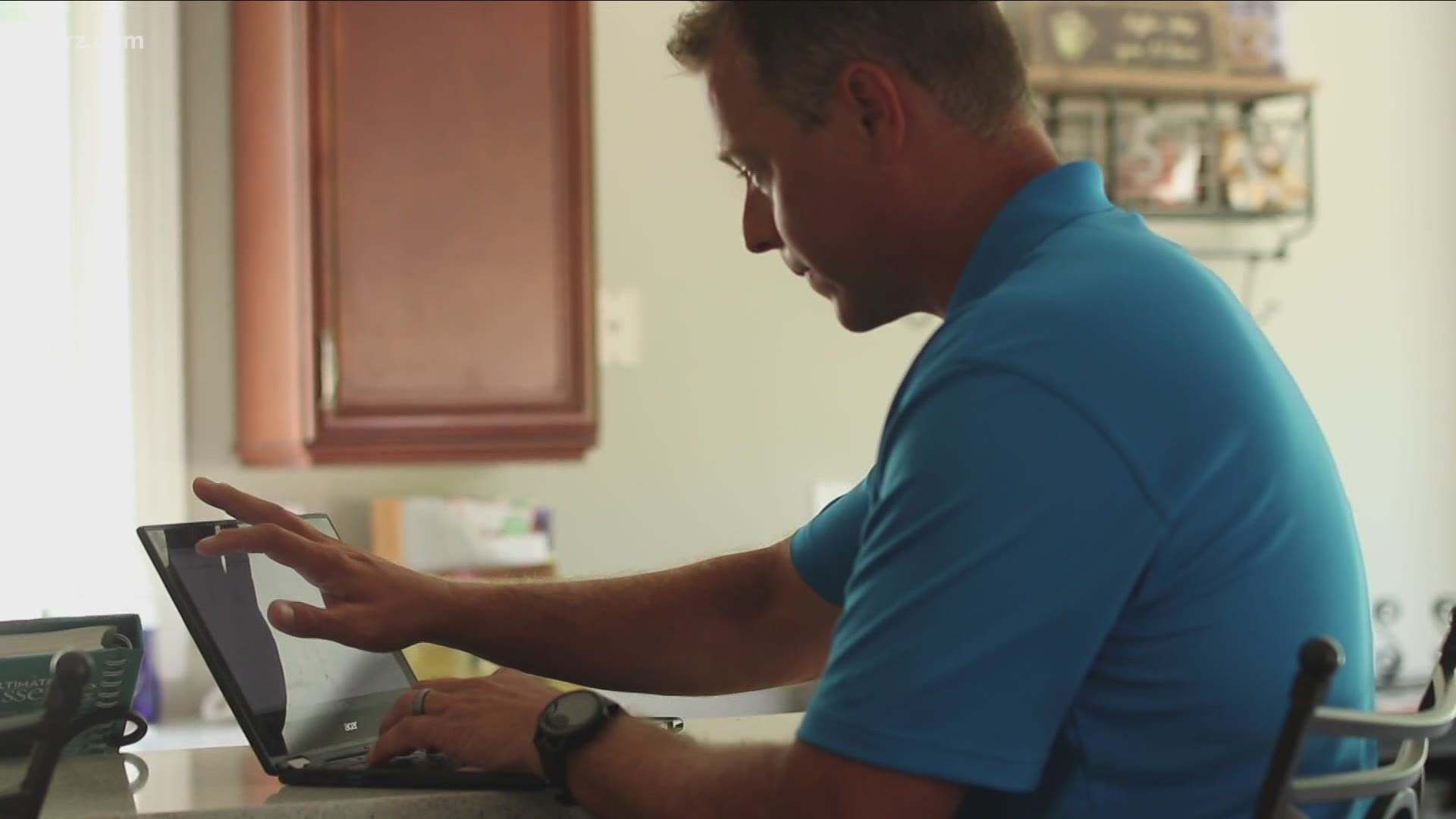 But you don't have to look far in Western New York to find someone struggling with broadband access. After asking on social media to talk to teachers or students who lacked adequate access, we received dozens of responses.

Michelle Gadd and her husband, Jeff, live in Alden with their three children. Jeff is a teacher in Williamsville. Their children are in seventh grade, fifth grade and kindergarten. When then pandemic hit, accessing schoolwork from home became the number one problem in the household.

"At least half-days, we would go in high stress just because we would struggle just getting on the internet," Michelle said. "Then starting a meeting being stressed was a big concern, you're frantic all day."

At their home in Alden there is no high-speed broadband service, only Satellite. The family used their phones as a hot spot to connect on a daily basis to do work. But four people using one hot spot all day had its own issues.

After a frustrating day in early June, Michelle and the kids had enough.

"I just said, 'You know what, let's turn them off and be done,' because we need to just walk away for a minute and regroup."

For Jeff, teaching from home was problematic because an already difficult situation of staying connected with students was heightened by the lack of adequate broadband access.

The impacts of this digital divide could affect the critical development of students, especially young ones.

"The risk of not having adequate interconnection at home for kids is learning loss, and it's also social isolation," Weiss said.

New York State, however, says progress has been made.

When 2 On Your Side reached out to the New York State Broadband Office for an interview about the Common Sense Media report, they sent the following statement:

"The New NY Broadband Program’s explicit goal is to expand high-speed broadband coverage to unserved and underserved areas of the state, and we can confirm and have repeatedly said publicly that approximately 98 percent of New Yorkers currently have access to high-speed, wired broadband."

It's worth noting that in Alden, only three locations were addressed with grants from the NYSBP, and it was satellite service.

"The internet is an essential tool," Weiss said. "I would say it's as essential as having electricity and running water in today's economy, and in today's educational environment."

The full Common Sense Media report on the K-12 digital divide can be read here.