President Trump says decision on easing guidelines will come from him, not governors

President Trump has previously pushed back on the idea he should pressure states that hadn't imposed stay-at-home restrictions to do so. 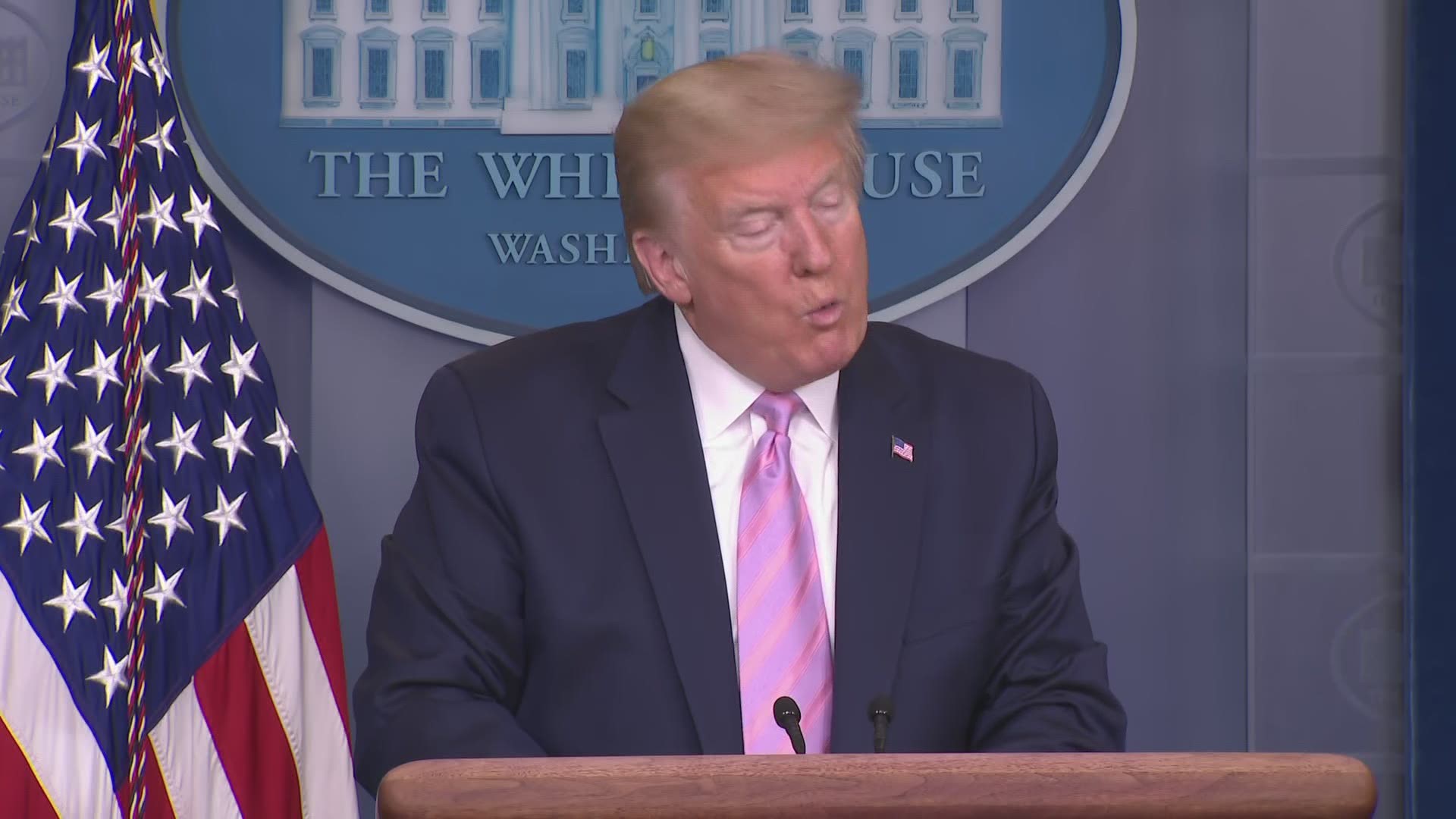 WASHINGTON — President Donald Trump asserted Monday that he is the ultimate decision-maker for determining how and when to relax the nation's social distancing guidelines as he grows anxious to reopen the coronavirus-stricken country as soon as possible.

Governors and local leaders, who have instituted mandatory restrictions that have the force of law, have expressed concern that Trump's plan to restore normalcy will cost lives and extend the duration of the outbreak.

Trump has pushed to reopen the economy, which has plummeted as businesses have shuttered, leaving millions of people out of work and struggling to obtain basic commodities.

Taking to Twitter on Monday, Trump said some are "saying that it is the Governors decision to open up the states, not that of the President of the United States & the Federal Government. Let it be fully understood that this is incorrect...it is the decision of the President, and for many good reasons.”

He added, “With that being said, the Administration and I are working closely with the Governors, and this will continue. A decision by me, in conjunction with the Governors and input from others, will be made shortly!”

Trump last month put in place nationwide recommendations for most Americans to remain home and distant from one another in order to slow the spread of the virus. But his guidelines, scheduled to expire at the end of the month, have little force — unlike actions of governors and local leaders that carry fines or other other penalties, and in some jurisdictions extend out into the early summer.

Trump's claim that he could force governors to reopen their states comes after he spent weeks arguing that he didn't believe he should pressure states that hadn't imposed stay-at-home restrictions to do so. He had cited his belief in local control of government.

Trump has bristled at criticism that the social restrictions aimed at stopping the spread of the coronavirus could have saved lives if they'd been started earlier — and that when they're eased new cases are certain to arise.

When asked Sunday on CNN if acting earlier on social distancing and “stay at home” policies could have saved lives, Fauci responded in part: “It’s very difficult to go back and say that. I mean, obviously, you could logically say that if you had a process that was ongoing and you started mitigation earlier, you could have saved lives. Obviously, no one is going to deny that. But what goes into those kinds of decisions is complicated.”

Trump reposted a tweet that referenced Fauci’s comments and that said “Time to #FireFauci.” Trump again pointed to his decision in late January to restrict travel from China, writing, “Sorry Fake News, it’s all on tape. I banned China long before people spoke up.”

RELATED: US stocks open lower following their biggest week since 1974

RELATED: Trump retweets call for Anthony Fauci to be fired

Fauci had said the economy in parts of the country could have a “rolling reentry” as early as next month, provided health authorities can quickly identify and isolate people who will inevitably be infected. But he said he “can't guarantee" that it will be safe for Americans to vote in person on Election Day, Nov. 3.

Fauci cautioned that whenever restrictions ease, “we know that there will be people who will be getting infected. I mean, that is just reality. “

“There is always the possibility, as we get into next fall, and the beginning of early winter, that we could see a rebound,” he said.

Dr. Christopher Murray, director of the University of Washington institute that created widely cited projections of virus-related deaths, said studies show that lifting restrictions at the end of this month would lead to a rebound in the number of infections. Because states don’t really have the capability to deal with a big volume of new cases, he said, “by July or August we could be back in the same situation we are now.”

The U.S. has the most confirmed cases and deaths of any nation, more than 555,000 and more than 22,000, respectively, according to Johns Hopkins University. In hard-hit New York, the number of deaths topped 700 for six straight days, but the increase in people who are hospitalized is slowing, in a hopeful sign.

For most people, the new coronavirus causes mild or moderate symptoms, such as fever and cough that clear up in two to three weeks. For some, especially older adults and people with existing health problems, it can cause more severe illness, including pneumonia, and death.