The governor says the percent positive rate in the micro cluster zones is down across the state, and because of this, all Orange Zones have been dropped across NY. 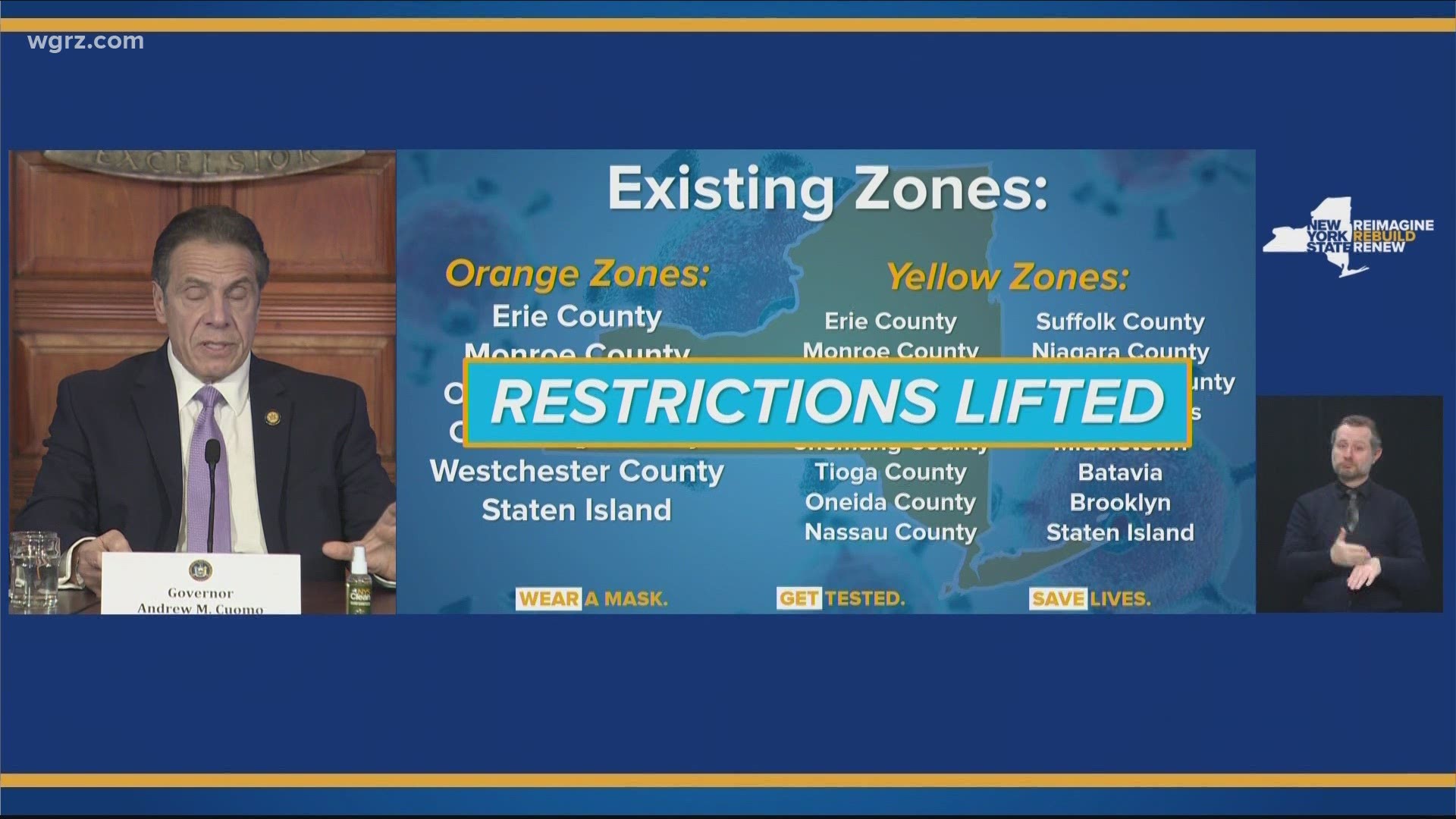 During the virtual news conference, Cuomo said he believes the holiday surge of COVID-19 cases is over and as such, announced changes in micro cluster zones across the state.

The governor says the percent positive rate in the micro cluster zones is down across New York, and because of this, all Orange Zones have been dropped. This includes Erie County, as well as areas downstate.

In addition, Yellow Zones in Erie County and Niagara County have also been dropped. According to the governor, the only remaining Yellow Zones are all downstate.

Not a return to normal

For schools, Wednesday's development means they no longer have to test 20% of their students and staff on a regular basis in order to offer in person learning.

For bars and restaurants, it means the ability to serve more customers, particularly indoors as the winter makes much of the outdoor seating they had during warmer months, impractical.

Secretary to the Governor Melissa DeRosa says it's important to remember that several COVID-related restrictions remain, including requirements that employees of personal care industries such as hair salons be tested every two weeks, and that stores do not exceed 50% customer capacity. lt is only the specific rules that applied to the previous Orange and Yellow Zones that are no longer in effect.

The Red, Orange and Yellow Zones had specific rules on capacity limits at residential and non-residential gatherings, as well as capacity at houses of worship and businesses. Restaurants also had specific limitations in terms of dining, while schools had mandatory testing requirements. Those restrictions can be viewed here.

Now restaurants can have 10 people per table and 50% capacity for the entire restaurant.

Despite these changes, the 10 p.m. statewide curfew for restaurants remains.

Reconciling the relaxation of restrictions

The COVID-related numbers the state uses to decide on restrictions, including percentage of positive tests, hospitalizations, and hospital capacity, while improving, currently aren't much different than they were in parts of the state when the micro cluster restrictions were put into effect.

Citing that, and the governor's stated fears about new strains of the virus, plus vaccines being in short supply, a New York Times reporter asked Cuomo on Wednesday how he could  then reconcile lifting the restrictions now.

"I don't know that we're ever gonna see that positivity number go down until the vaccines really start to kick in," said Cuomo, who believes there won't be enough people vaccinated to create a "herd immunity" to the virus until sometime in the summer or perhaps later.

"But you're talking about about livelihoods and the economy and billions of dollars, plus people's businesses and life's work at stake."

These are the same arguments that the governor's critics have been making for months, including several businesses (notably restaurants in Erie County) who successfully sued the state over its micro cluster restrictions.

Not much vaccine, but more money coming to New York from Washington

Cuomo also said the state does not expect to be flush with vaccines anytime soon, but noted that FEMA is sending the state $467 million to assist in further administering the vaccine when those doses do arrive.

According to Senate Majority Leader Charles Schumer (D-NY) the funding will help pay for supplies required for storing, handling, distributing, transporting, and administering vaccines, including containers for medical waste, and supplies necessary for proper storage of the vaccines including liquid nitrogen, dry ice and portable storage units. Additionally, the funding supports vaccine transportation such as refrigerated trucks and transport security,

According to Schumer's office, this is in addition to the $1.3 billion the Trump Administration had allocated to the state for similar purposes in early December.

While the Orange and Yellow Cluster Zone restrictions have been lifted for Erie County, this does NOT mean all is "normal." All businesses must still follow the NY Forward Guidance and Reopening Rules for your industry. The rules can be found here: https://t.co/RrvGI2EKXR