Cuomo's critics had long charged that he was manipulating coronavirus statics to boost his image as a pandemic leader. 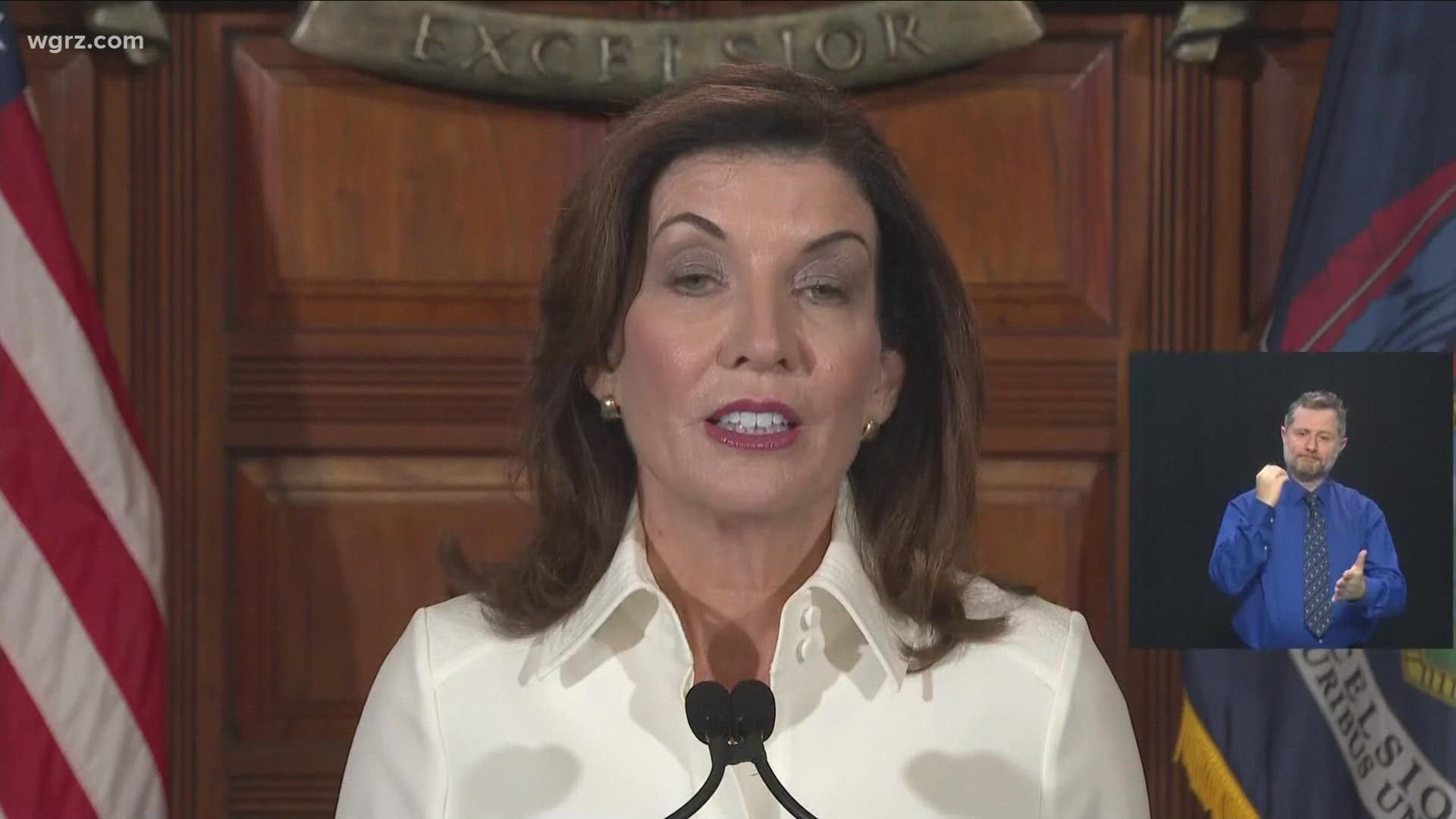 ALBANY, N.Y. — Delivering another blow to what's left of former Gov. Andrew Cuomo’s legacy, New York’s new governor acknowledged on her first day in office that the state has had nearly 12,000 more deaths from COVID-19 than Cuomo told the public.

“The public deserves a clear, honest picture of what’s happening. And that’s whether it’s good or bad, they need to know the truth. And that’s how we restore confidence,” Gov. Kathy Hochul said on NPR.

In its first daily update on the outbreak Tuesday evening, Hochul's office reported that nearly 55,400 people have died of the coronavirus in New York based on death certificate data submitted to the Centers for Disease Control and Prevention.

That's up from about 43,400 that Cuomo reported to the public as of Monday, his last day in office. The Democrat who was once widely acclaimed for his leadership during the COVID-19 outbreak resigned in the face of an impeachment drive after being accused of sexually harassing at least 11 women, allegations he disputed.

The higher number is not entirely new. Federal health officials and some academic institutions tracking COVID-19 deaths in the U.S. have been using the higher tally for many months because of known gaps in the data Cuomo had been choosing to publicize.

But Hochul, who was lieutenant governor before being propelled to the state's highest office, said it is vital to be fully transparent about the numbers. Her spokesperson, Haley Vicarro, said the governor consulted with the state Health Department before making the change to report both tallies going forward.

“There’s a lot of things that weren’t happening, and I’m going to make them happen," Hochul said Wednesday on MSNBC. "Transparency will be the hallmark of my administration.”

The Associated Press first reported in July on the large discrepancy between the figures publicized by the Cuomo administration and numbers the state was reporting to the CDC.

The count used by Cuomo in his news media briefings and on the state’s COVID-19 fatality tracker included only laboratory-confirmed COVID-19 deaths reported through a state system that collects data from hospitals, nursing homes and adult care facilities.

“There are presumed and confirmed deaths. People should know both,” Hochul said.

By Wednesday, the state’s website included the higher tally.

Under the Cuomo administration, the state Health Department refused to make an expert available to the AP to explain its continued decision to publicize only the lower tally.

Azzopardi said that in August, the Health Department issued an order “mandating that any presumed COVID death be tested to ensure accuracy in numbers.” He said the CDC requested data on “presumed” COVID-19 deaths, too.

Azzopardi didn't respond to request for comment on why Cuomo's lower tally excluded confirmed COVID-19 deaths outside of hospitals and nursing homes dating back to spring 2020.

During the spring of 2020, when New York was the deadliest hot spot in the U.S., Cuomo emerged in the eyes of many Americans as a hero of the pandemic for his daily PowerPoint briefings and stern but reassuring language. He won an international Emmy and wrote a book on leadership in a crisis.

But Cuomo's critics long charged that he was manipulating coronavirus statistics to burnish his image. Months later, it turned out that his administration had minimized the death toll among nursing home residents by excluding several thousand who had succumbed after being transferred to hospitals.

Cuomo used those lower numbers last year to erroneously claim that New York was seeing a much smaller percentage of nursing home residents dying of COVID-19 than other states.

“In order to rebuild public trust, it will be important that anyone who had a hand in manipulating or withholding relevant data from the public no longer has a place in state government," she said.

Sen. Gustavo Rivera, a Democrat from the Bronx who chairs the Senate Health Committee, blasted the Cuomo administration's “appalling but not surprising” efforts to obscure the death tally reported to New Yorkers.

“What you have here is just the clearest evidence, as if we didn’t have enough, that this administration went out of its way to make the governor seem much better, much more skilled and that he had handled the pandemic much better than anyone else,” Rivera said.

Rivera said he’s urging Hochul to fire Zucker. “He aided and abetted in the worst times of the pandemic what is obviously the governor's efforts to burnish his image,” Rivera said. “I was hoping it wasn’t true, sadly it needs to go.”

This week, in the wake of the sexual harassment scandal, Cuomo's Emmy was rescinded. And the publisher of his book has said it will no longer print hardcover copies and will not come out with a paperback edition.