Health officials in Genesee, Orleans and Wyoming counties sent a letter to Gov. Cuomo to expand the clinics at Genesee Community College. 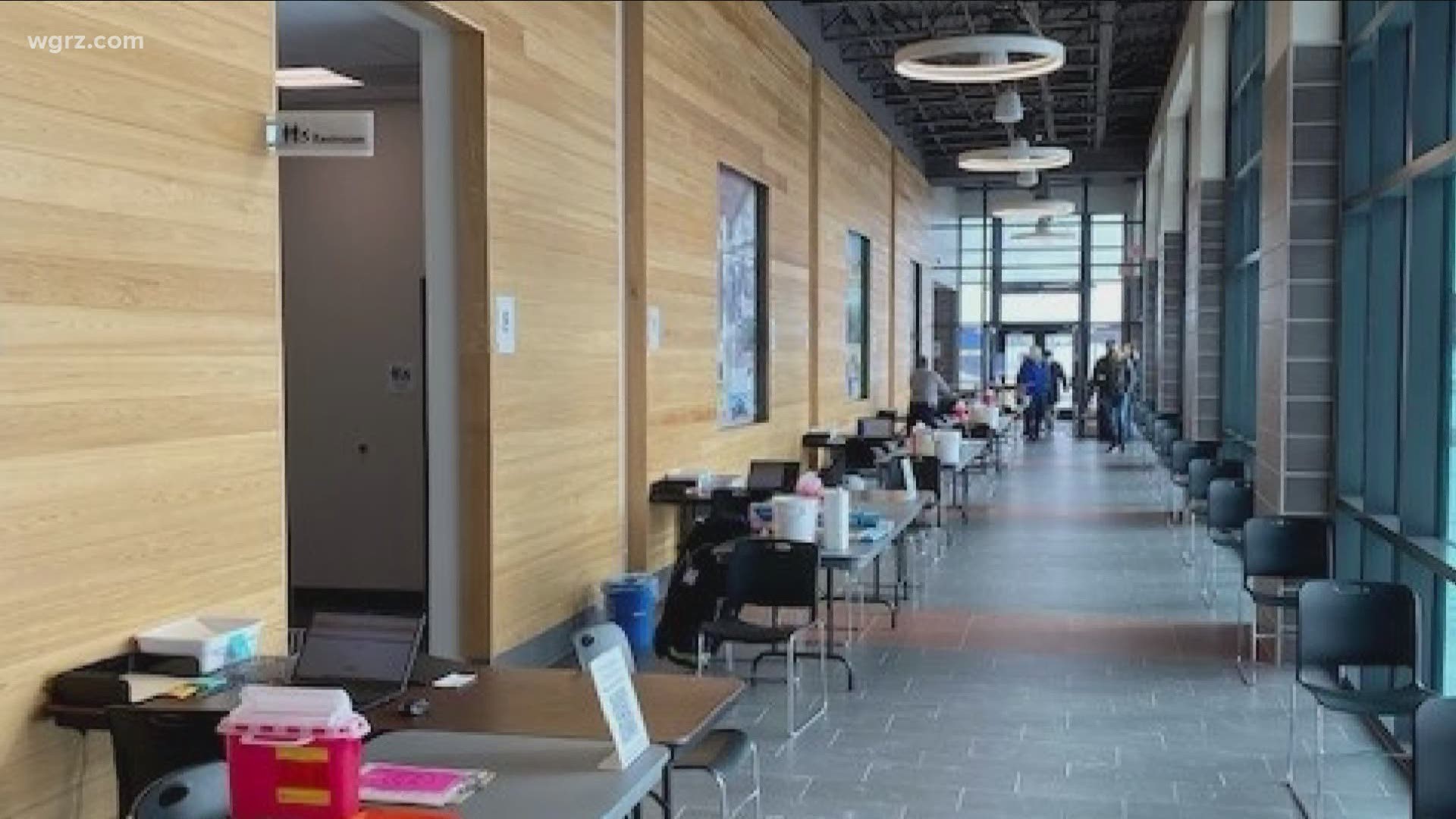 BUFFALO, N.Y. — Six FEMA sites in New York State will begin providing vaccinations starting March 3. The one in Buffalo is opening at the Delavan Grider Community Center. There's also one in Rochester.

Now other counties in Western New York are hoping to eventually have a mass vaccination site too.

"A mass vaccination site that the state is setting up is exactly that," said Chautauqua County Health Director Christine Schuyler. "Anybody who is eligible can come. There's one place that you can go, see if you're eligible, click on a link and schedule your appointment. That's what we should all have."

It's also creating a lot of confusion.

"The public just doesn't understand," Schuyler said. "The state is dictating who can vaccinate who and where that can happen at and that creates a lot of confusion, a lot of frustration. It would be nice to just be able to be a vaccine provider and vaccinate anyone who is eligible at that time to be vaccinated."

Schuyler says people also tend to get confused about where they're supposed to schedule their appointments, whereas the mass vaccination site just requires people to go to their "Am I Eligible" site and make an one from there.

Right now, Chautauqua County is getting about 300 a week for essential workers and anywhere from 100 to 500 doses for those with disabilities and comorbidities.

Transportation is among the biggest issue for people in rural areas though.

Health officials in Genesee, Orleans and Wyoming counties sent a letter to Gov. Andrew Cuomo last week, saying how some residents travel as far as 45-60 minutes for their appointments. The letter asks Cuomo to expand the clinics at Genesee Community College into a mass vaccination site.

A spokesperson from Cuomo's office provided this statement:

"New York State has operationalized one of the largest vaccine distribution networks in the nation, with over 5,000 providers statewide, and nearly 4 million shots administered to date. The state has also taken special efforts to reach communities where access is lowest, hesitancy rates are the highest, and vaccination rates are below average, but as with everything, the state's supply is limited by the allocation we receive from the federal government. We look forward to being able to continue to expand access as the federal government increases the supply of vaccines."

“A regional mass vaccination clinic would be a great partnership between community leaders and the state. A tri-county clinic would help to bridge resource and service gaps that are only too familiar to socially-vulnerable rural communities like Orleans County. We receive about 200 vaccine doses a week. With such limited supply and no broadband internet options for people to register online for vaccines, addressing the needs of just our seniors has been insurmountable. The potential for FEMA to supply 1,000 vaccine doses per day at a site manned by the National Guard would bring incredible relief and assistance to Orleans County, and take some pressure off our three local sites that have such limited supply.”

Genesee and Orleans counties currently get about 100 to 200 doses a week.
Yet there's almost 100,000 people who live there, when combined with neighboring Wyoming County.