The National Institute of Allergy and Infectious Diseases director and member of President Trump's coronavirus task force spoke with 2 On Your Side's Pete Gallivan. 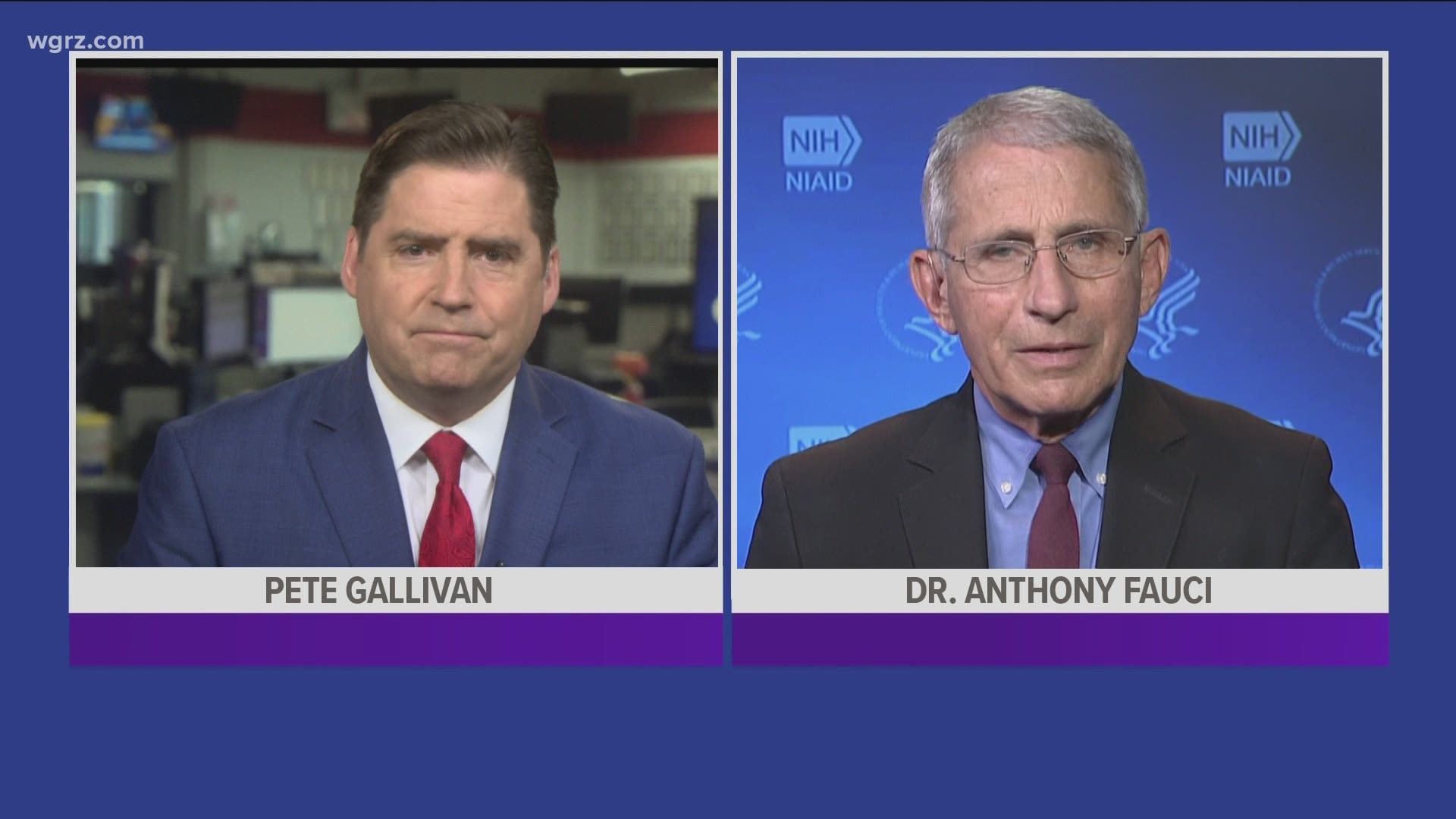 BUFFALO, N.Y. — New York State has taken a phased regional approach to reopening for business, while many states have acted together as a full state.

So did that approach help us in the eyes of infectious disease experts?

Who better than to answer the question than Dr. Anthony Fauci, who spoke exclusively with 2 On Your Side's Pete Gallivan on Friday afternoon.

Fauci is the director of the National Institute of Allergy and Infectious Diseases and is a key member of President Donald Trump's coronavirus task force.

2 ON YOUR SIDE: One might get the idea that New York is a model for how it has approached dealing with COVID-019, but is that really the case? You see things from a global and national perspective, how would you grade New York?

FAUCI: You know, I think New York has as a state, but certainly the metropolitan area has really suffered so disproportionately compared to the rest of the country through no fault of their own. They were hit with an influx of probably travel-related cases from Europe particularly from countries like Italy and France that have a have number of cases right now, despite the fact that things are turning around; the number of deaths, the number of hospitalizations and others it going down.

New York is a big state, it is a heterogeneous State and parts of New York, particularly in areas such as in Buffalo and other Upstate areas have actually done reasonably well. What we're doing right now, we're seeing in New York is doing a careful, step-wise re-entry to trying to get normality, according to the guidelines. You know there's a gateway guidelines. There's the Phase 1, Phase 2, Phase 3, so hopefully what will see is a return to normality in a careful, very measured way." 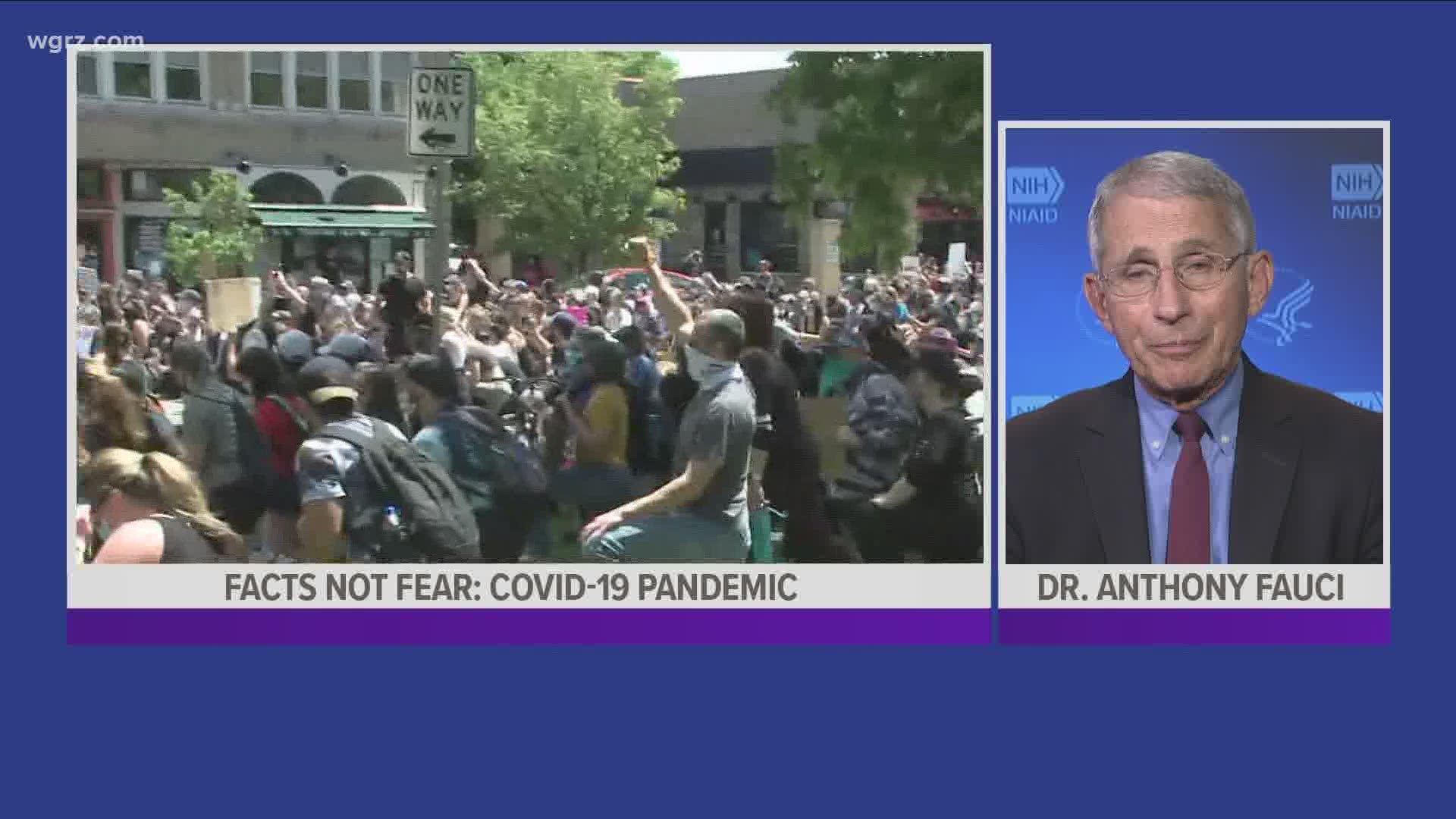 2 ON YOUR SIDE: As we look around the country, we are seeing a spike in several states that have already reopened, while here in New York, where we have had a methodical, phased-in approach, we have not seen the same thing so far. What do you see from those numbers? Did we just peak earlier than them, or is a slower approach making a difference?

FAUCI: One of the things we need to be aware of and I think people get confused, but I think you are making a good point. Different parts of the country, we have a very large country that's very heterogeneous. The difference even within a state between the metropolitan area and upper Upstate New York, between Detroit and Casper, Wyoming, between New Orleans and a place in Montana, so it really depends on what the level of infection is when you start going down.

And the dynamics are going down, and you get that slope going down, and you carefully reopen, you're going to see some infections for sure because it hasn't disappeared. It's how you handle them that's going to determine whether a little blips are actually going to turn into a resurgence, and I think that New York, you know, under the governor, under the mayor of the city, and the cities in Upstate New York area ware of the kind of things that you need to do with the physical separation. Continue to wear masks, continue to wash your hands, and when the cases come up, you do identification isolation and contact tracing, and you have the resources to do that, so hopefully you'll be successfully able to make that gradual transition to opening up more and more." 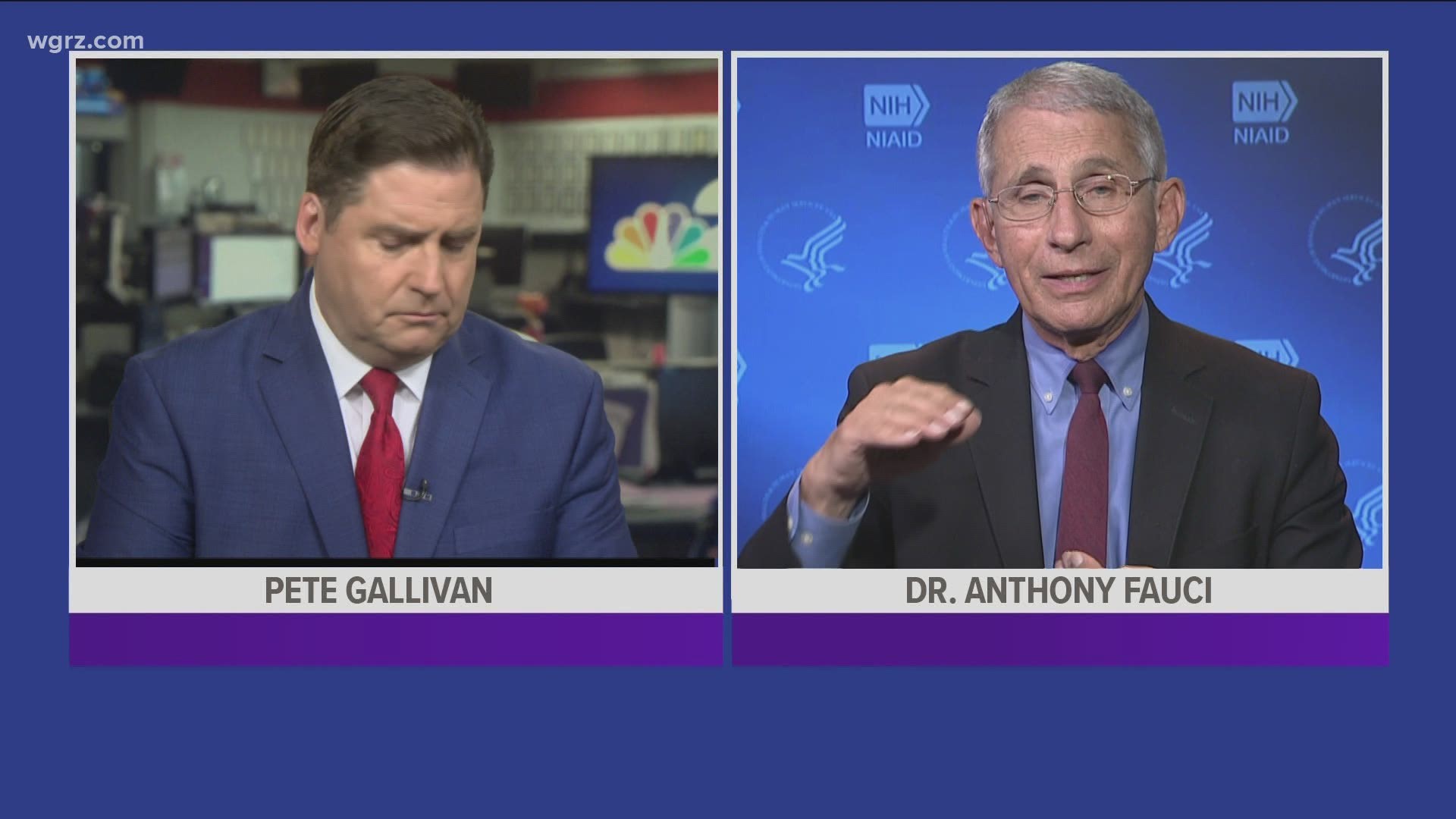 2 ON YOUR SIDE: During the last two weeks we have seen protests, involving tens of thousands of people, Saturday here in Buffalo marks two weeks since our first major demonstration. I know this is something you and your team have been monitoring closely. What are you seeing?

FAUCI: You will see cases that would be recognized clinically weeks after a congregation in a crowd, so one of the things you got to be careful is that you don't get overconfident and say, "Well, we had a demonstration two days ago and nothing has happened." You're not going to see the effect. It is risky to congregate, and the situation is that we all appreciate the constitutional right and the need for people to go to actually execute that right to protest in a peaceful way against social and other injustice is particularly what's going on right now.

However, it is risky, and one must realize that, so if you feel compelled that you have to demonstrate and you have to be in a crowd, please wear a mask and don't take the mask off when you're chanting and shouting, because we know there is a clear risk when you get together in a crowd that you're increasing the possibility that you going to be spreading infection and or obtaining infections." 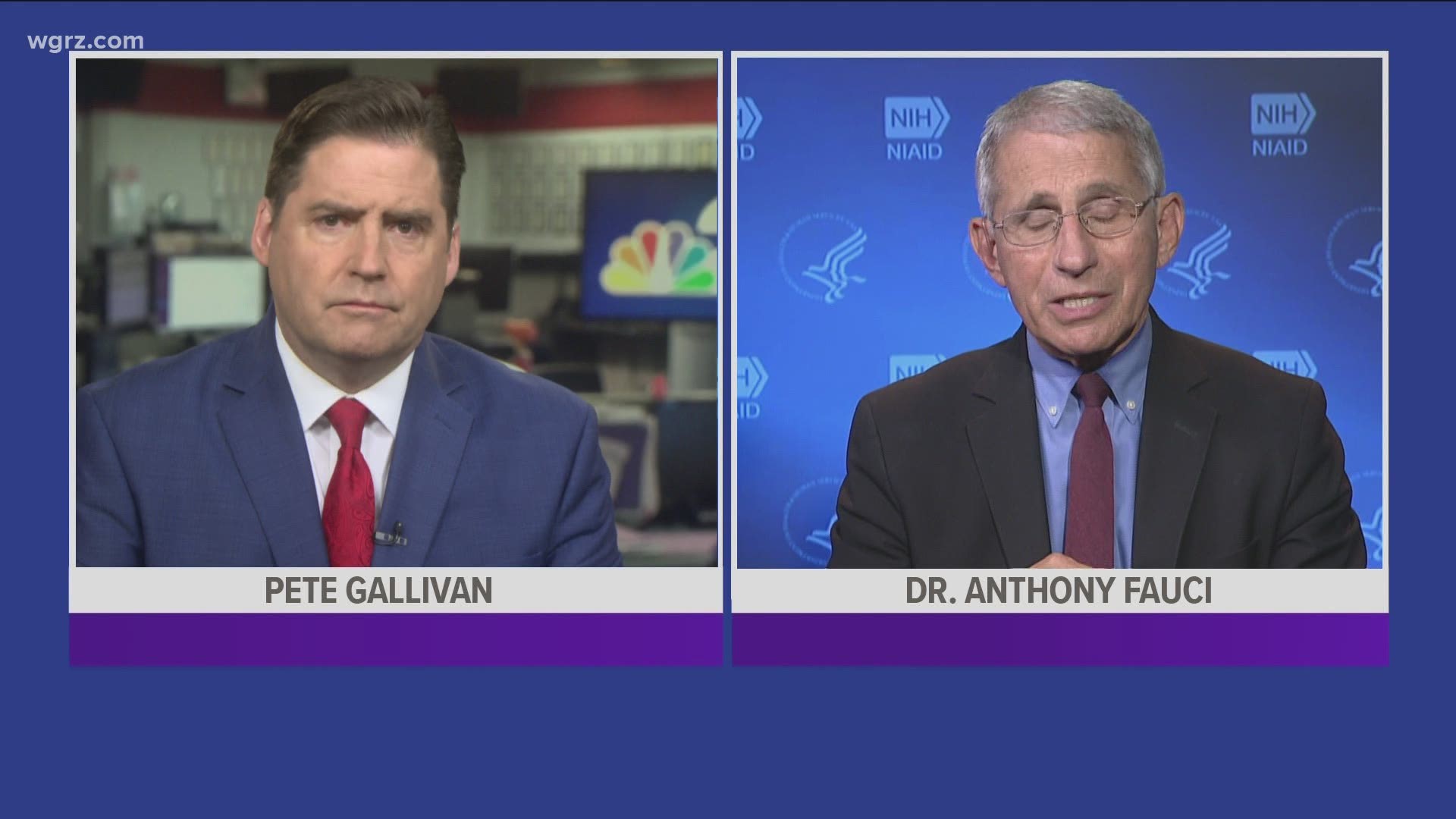 2 ON YOUR SIDE: We are hearing a lot of positive news about progress in coming up with a vaccine. When one is finally produced, what does that mean? Does it eliminate concern?

FAUCI: I mean, no vaccine is a 100 percent protective. We would hope you would get a vaccine that would provide enough protection so that when you vaccinate enough people, you'll wind up getting with called herd immunity. Enough people are vaccinated, and enough people are protected that the virus is not going to go anywhere in the community.

2 ON YOUR SIDE: Knowing what you know now, would you have done anything differently from the beginning when the task force was formed?

FAUCI: It's an obvious question, but in some respects there really is no good answer. You could never say I've done it perfectly, and I could not have done it any better. That would be presumptuous and untrue. So what you said yourself, you do the best that you can, there's always the situation. Well, you know that shutting down and mitigation can definitely put a damper on infection, we've proven that.

In fact, it was an article that came out just a couple of days ago to show that shutting down and locking down throughout the world has saved hundreds of millions of people from being infected and millions of deaths throughout the world, so we know that it works. So somebody says, "Well, if you had done it a week sooner, would you have saved more infections and lives if it were done in a timely manner?" But of course, we have to be humble and know we always can do better.

2 ON YOUR SIDE: Finally, something that is on a lot of minds in Western New York, do you see any chance of 70,000 fans packing into the Ralph Wilson Stadium this fall to watch the Bills?

FAUCI: It is unlikely that we're going to be able to see stadiums full of people. I know I spoken personally to several of the commission is the various professional leagues. They're going with plans that are trying to get teams back in a very unusual way called a bubble effect, where they test everybody. They put them in this secure location, they play almost in a tournament way, and they have it televised. That's one of the way they will do it.

You can't guarantee what is or is not going to happen in the fall, but since it's just a couple of months away, I don't see return back to full normality. Will you feel comfortable and being in a stadium, an arena, or an auditorium, or what have you where there are tens of thousands of people? That's going to be difficult.

2 ON YOUR SIDE: So many have said that testing is the key. We're doing about 50,000 test a day in the state, and the numbers here in Erie County are hovering around 1 percent positive. With all the information and misinformation out there, how should we be looking at those numbers?

FAUCI: You know the numbers are actually good numbers, in the sense if you have such a low level when you start increasing testing, you're going to pick up cases that would have been missed because they were without symptoms. But you do surveillance testing of that type. The thing you need to keep an eye out on on what the percentage of individuals that you test positive.

If the percentage of them goes up, then you got to watch to make sure you're not only picking up cases that you would have missed. But there's actually an upswing in cases, so that's the reason why you got to keep your eye on that. So far, so good, but it's still in the early stages of opening. You got to be very careful and keep observing to make sure that when you see those little blips you're able to suppress them."

2 ON YOUR SIDE: Is there a very real chance of being overconfident and misinterpreting the numbers as it's over?

FAUCI: You know, of course, there is, and that's one of the reasons why, I mean, myself as a physician, scientist and public health official is always trying to tell, and hopefully successfully getting people to understand don't get overconfident. This is not over yet. You suffered greatly as a state, and particularly in the city of the metropolitan area, where I was born and raised and do have a special affection for that. But right now we've done well, the parameters are down, let's try and keep them down but don't get overconfident. Even at a minimum, people, as they open up should still be wearing a mask washing their hands and to the extent possible maintaining the physical distance and not congregating in crowds.