Demonstrators took to Niagara Square on Thursday, calling for the immediate reopening of all businesses and churches. 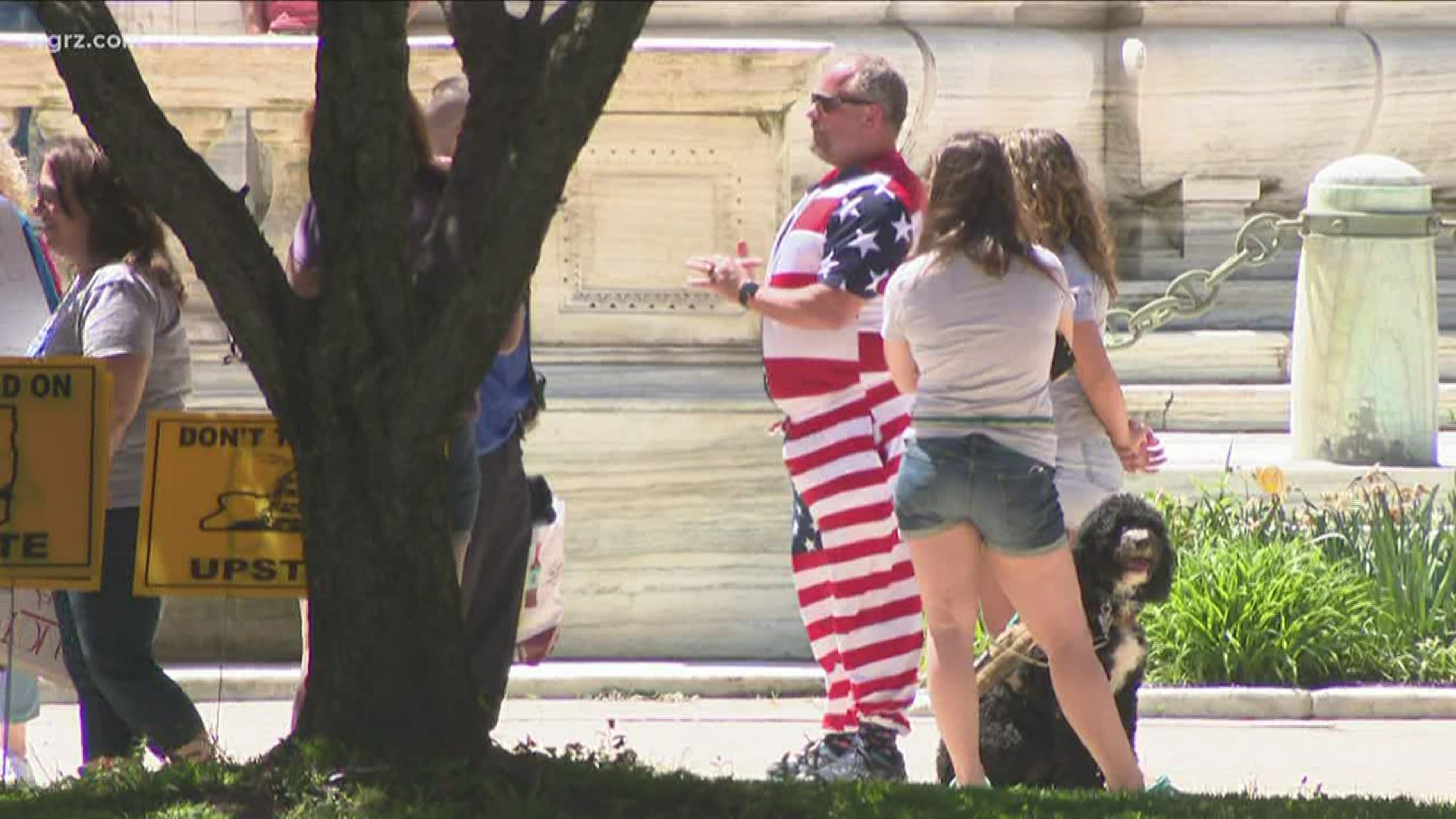 BUFFALO, N.Y. — Demonstrators took to Niagara Square in Buffalo on Thursday, calling for the immediate reopening of all businesses in Western New York.

In addition, several of the protesters voiced their disagreement with New York Gov. Andrew Cuomo's continued restrictions on their ability to attend church services unless they involve fewer than 10 persons, calling the Governor's order blatantly unconstitutional.

Frustration with the pace of reopening

The region is currently in the first stage of the state’s gradual relaxation of its coronavirus-related shutdown orders, which were implemented in March when it was feared the number of those infected would result in a surge that would overwhelm the health care system.

That never occurred, and while Phase 1 allows the resumption of manufacturing, construction, and limited retail, the area’s economy continues to suffer, and figures to for some time if restrictions remain in place.

"I think in the beginning it made sense to shut down a lot of businesses, said Devon Rusinek, one of the organizers of the demonstration.

However, based on additional knowledge about the virus, the dwindling rate of deaths and hospitalizations, the still large number of unemployed, and the growing number of businesses that may never recover, he and others say it's time to lift the restrictions.

“We can walk those back now that the data has come to light,” Rusinek said.

Governor Cuomo on Thursday contended that is precisely what the state is doing through measured and “prudent” means.

“We don’t want to make a mistake now and go back to a spike,” Cuomo said at his daily coronavirus briefing, where he again acknowledged the frustration of those who would like to see things move faster.

Cuomo insisted, though, that we're not out of the woods and that there's real danger if we proceed too quickly

“It's our actions that are creating the infections,” Cuomo said.

'This makes no sense'

“I don’t believe what the government is telling us,” said New York State Assemblyman David DiPietro, a Republican from East Aurora who joined the demonstration, and who believes more lives are being ruined by not reopening the economy and restoring people’s ability to make a living.

"I'm here representing all the people that want to open up their businesses and open up their churches and to say enough is enough," DiPietro said.

DiPietro told WGRZ-TV that if measures such as wearing masks and maintaining social distancing really did help “flatten the curve” and continue to do so, (something he personally does not believe), then the continued and prolonged approach of reopening some business and not others makes no sense, especially to smaller ones.

“When you can go to a Walmart with 8,000 to 10,000 people a day, but your bike shop in your own little town can't see five or 10 people because they're deemed a health hazard, that is ridiculous, and this has all got to stop,” he said.

"We're adults, and if we've got an underlying problem we can stay home but if you have to open your business to survive like the thousands I’ve spoken to who can’t feed their families then we need to open up.”

The more than 100 demonstrators were for the most part quiet, outside of an occasional chant, and at all times peaceful.

There appeared to be no counter demonstrators, and while the demonstration itself would appear to have violated the state’s existing ban on gatherings of more than 10 people, police made no arrests.

“If people want to be scared and stay in their homes, let them. But their fear should not take away our freedoms to assemble,” DiPietro said.