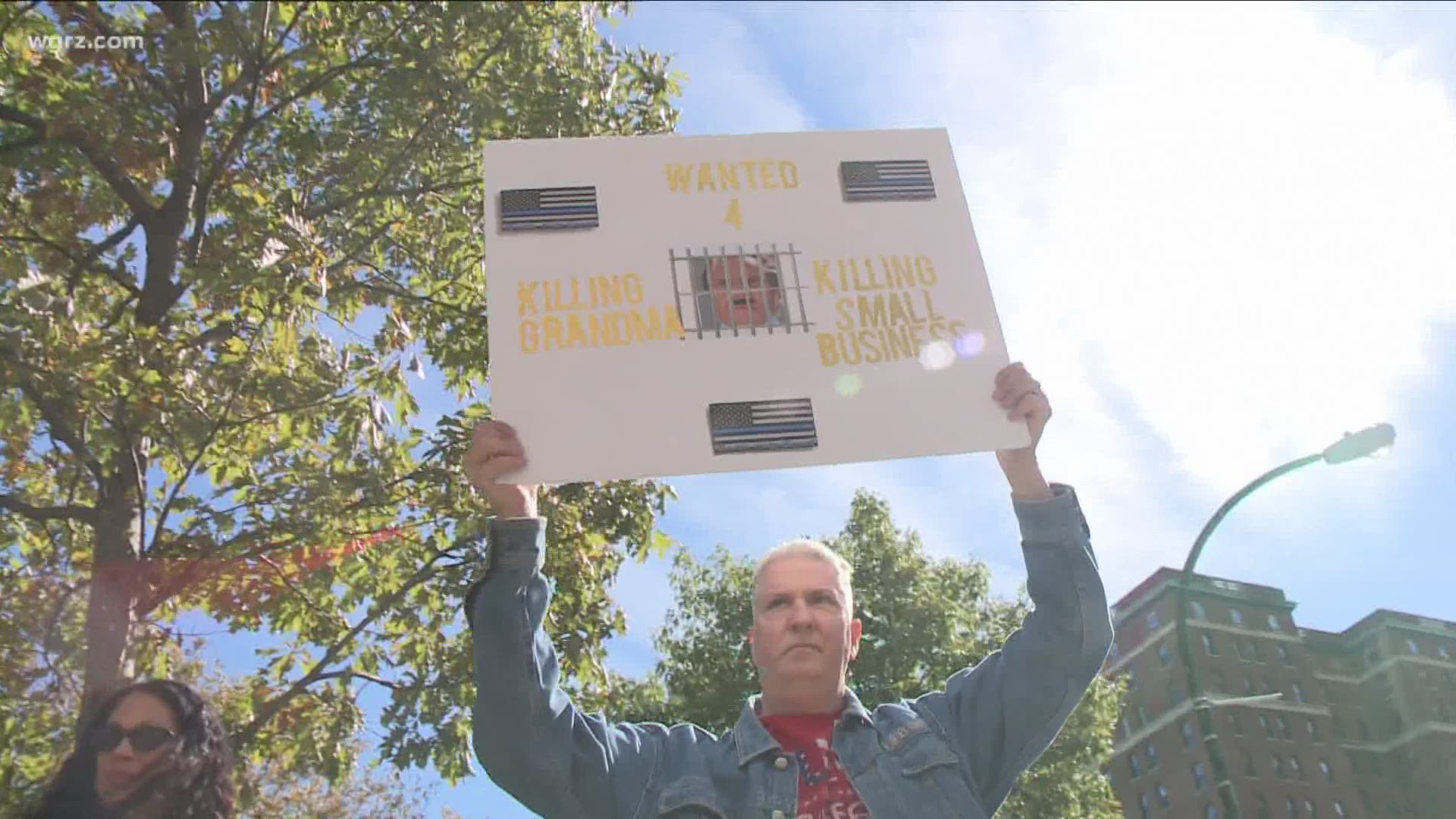 BUFFALO, N.Y. — They called it a gridlock protest around Niagara Square in Buffalo. We have seen them before with the honking horns and strong messages directed against our state's chief executive.

And he has added, "We have to do better in Western New York."

So that prompted one driver on Wednesday to proclaim this to the small crowd that gathered in the Square, "Cuomo - you are under citizen's arrest."

And Nancy Orticelli of West Seneca, who says she is president of the Constitutional Coalition of New York State, weighed in on the governor's references to this area.

"Now he's talking about Western New York being a hot spot because our numbers supposedly are going up as COVID is concerned," Orticelli said. "And you know what, the percentage when you look at that is pretty miniscule. And to shut down a whole economy and shut down people's basic rights of freedom... as to whether or not you can cover your face or not, you have to cover your face as if you're not old enough or wise enough to make that decision on your own... he's out of control."

Other participants echoed that sentiment. Mark Walker of Grand Island said, "They're destroying the middle class. All these small businesses are going out of business."

And Terry Vail of Buffalo added, "I'm very upset that he's keeping the churches closed. You can fly in an airplane, you can do a lot of things but you can't go to a movie theater. But churches to me are important... because I'm a very pro-life person."

We also heard from rally's organizer Rus Thompson. He brought up state lawmakers who voted earlier this year at the height of the pandemic in the state to give the governor emergency powers to issue his own executive decisions.

Thompson asked of Democratic lawmakers, "Why are you allowing Governor Cuomo to dictate every single thing. He's killing Western New York... is exactly what he's doing. And none of the legislators are standing up against him. The Republicans have no say. We have no control."

2 On Your Side asked further if Thompson was frustrated that he did not see some Republican lawmakers joining him for this protest. Thompson replied, "No, not really because they see it's no use."

Orticelli forcefully disagreed on that point.

"It's not just the liberal Democrats - it's a lot of Republicans that voted to increase the governor's power," Orticelli said. "And those as Rhinos... Republicans in name only and we know what the Democrats are gonna vote for- it was shocking to see what the Republicans voted for."

This reporter also attempted to speak with someone who accused the media of not reporting accurately and twisting their words. I asked her to explain that viewpoint but she simply held up a sign that said "Free WNY."

Orticelli said she was somewhat frustrated by the small turnout for the rally, which was promoted on social media. But she pointed out the noon hour is a difficult time for many people in the workforce. She added, "We're not gonna give up... we're not gonna stop fighting. And even if it doesn't do any good - at least I can look my kids in the face and say I didn't stand by while our freedoms were being taken away... I tried my best." 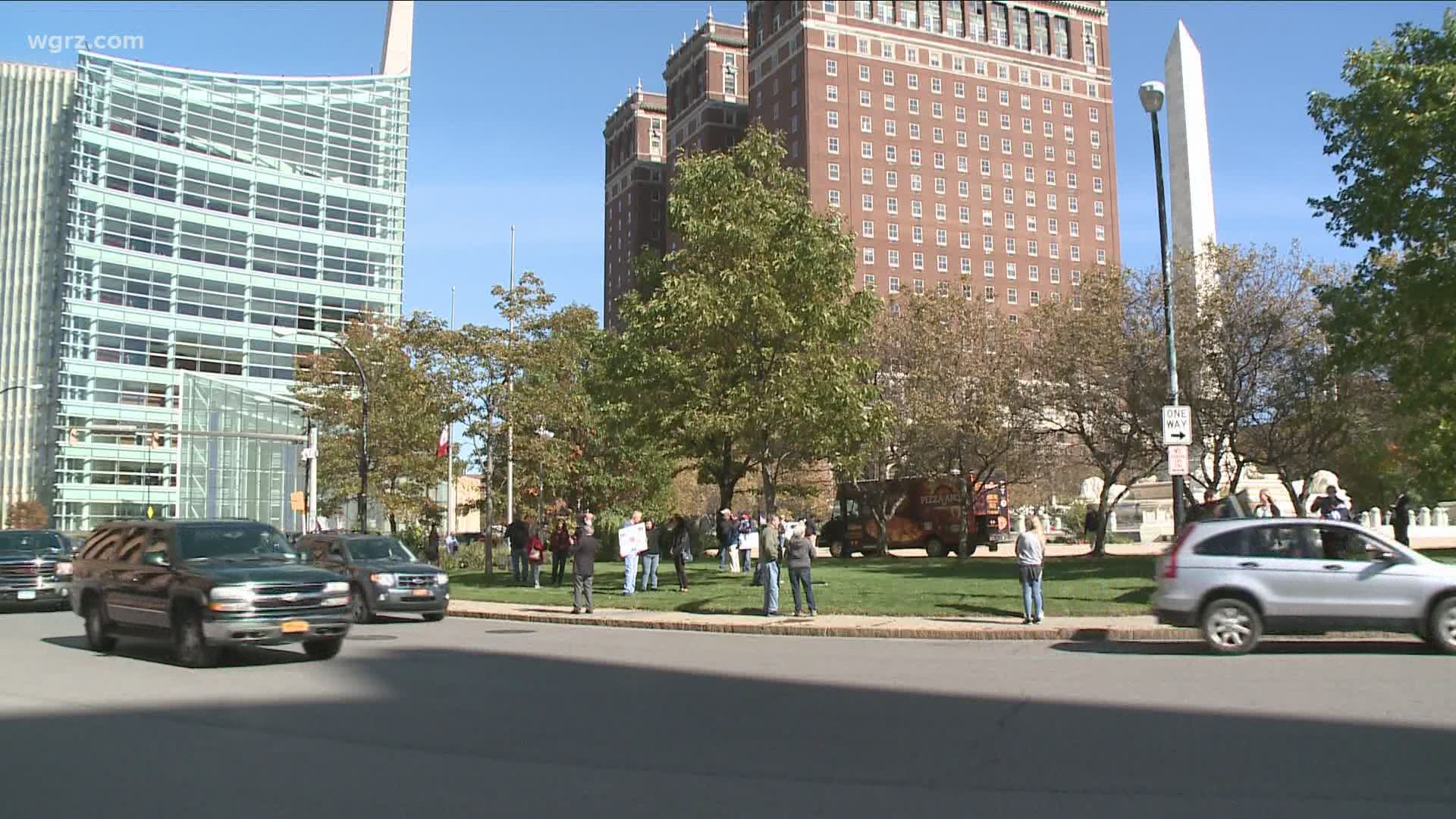