Education Secretary Betsy DeVos has doubled down on President Donald Trump's insistence that kids can safely return to the classroom. 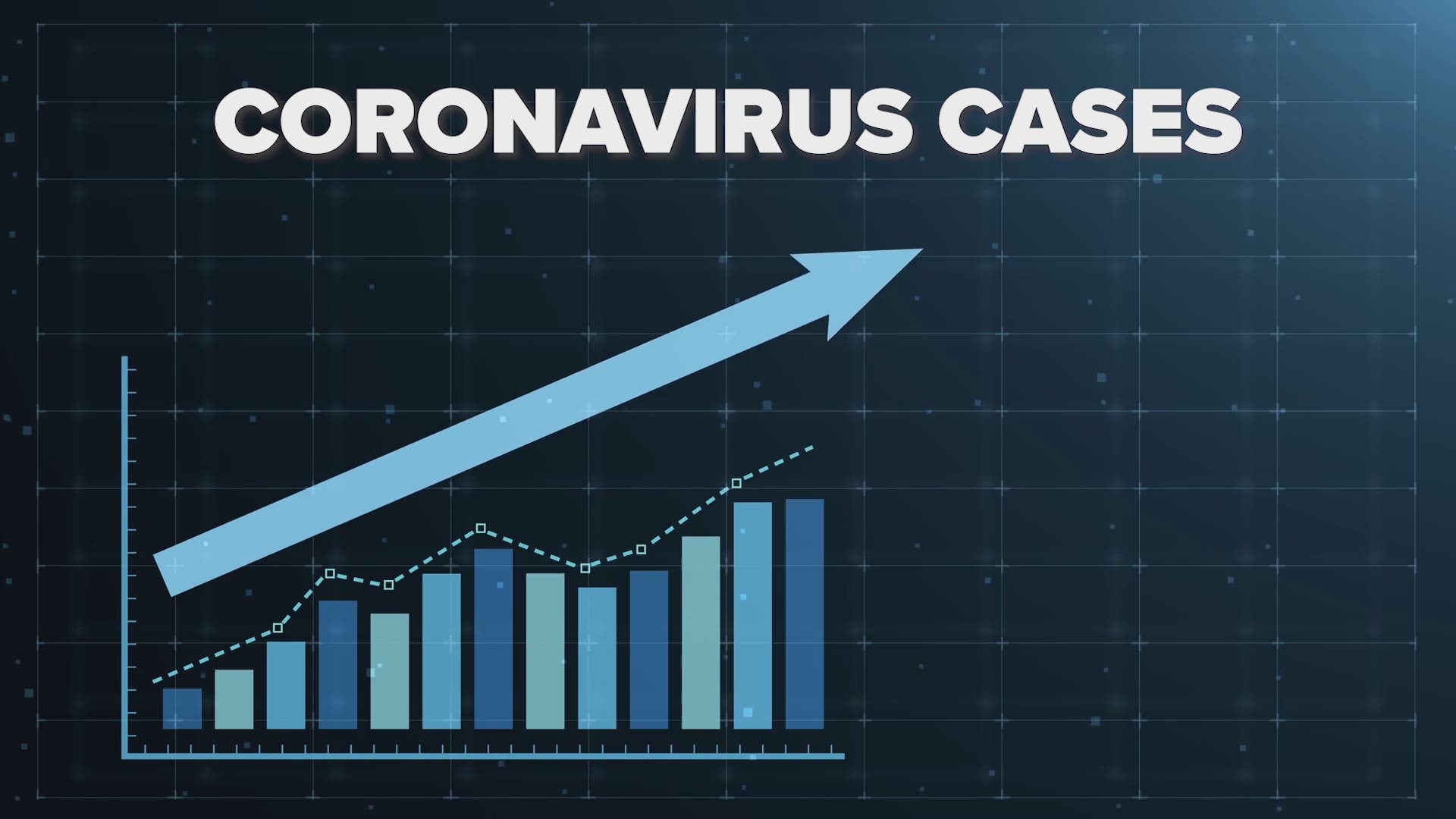 As the Trump administration pushes full steam ahead to force schools to resume in-person education, public health experts warn that a one-size-fits-all reopening could drive infection and death rates even higher.

They’re urging a more cautious approach, which many local governments and school districts are already pursuing.

But U.S. Education Secretary Betsy DeVos doubled down on President Donald Trump's insistence that kids can safely return to the classroom.

“There’s nothing in the data that suggests that kids being in school is in any way dangerous,” she told Chris Wallace on "Fox News Sunday."

Still, health experts say there are too many uncertainties and variables for back-to-school to be back-to-normal.

Where is the virus spreading rapidly? Do students live with aged grandparents? Do teachers have high-risk health conditions that would make online teaching safest? Do infected children easily spread COVID-19 to each other and to adults?

Regarding the latter, some evidence suggests they don’t, but a big government study aims to find better proof. Results won’t be available before the fall, and some schools are slated to reopen in just a few weeks.

“These are complicated issues. You can’t just charge straight ahead,” Dr. Tom Frieden, former director of the Centers for Disease Control and Prevention, said Wednesday during an online briefing.

Children infected with coronavirus are more likely than adults to have mild illnesses, but their risk for severe disease and death isn’t zero. While a virus-linked inflammatory condition is uncommon, most children who develop it require intensive care, and a few have died. Doctors don’t know which children are at risk.

“The single most important thing we can do to keep our schools safe has nothing to do with what happens in school. It’s how well we control COVID-19 in the community,” Frieden said. “Right now there are places around the country where the virus is spreading explosively and it would be difficult if not impossible to operate schools safely until the virus is under better control.”

Zahrah Wattier teaches high school in Galveston, Texas, where cases and deaths have been spiking. Until the state recently said schools must reopen to in-person classes, her district had been weighing options many others are considering, including full-time online teaching or a hybrid mix.

Wattier's school has mostly Hispanic and Black students, many from low-income families; almost 70% qualify for free or reduced-cost lunches and many have parents who work in “essential” jobs that increase potential exposure to the virus. Online education was hard for many with limited internet access, and Wattier knows in-person classes can help even the playing field.

RELATED: DeVos says schools shouldn't get federal funds if they don't reopen in the fall

“My school has over 2,000 students. That’s over 2,000 exposures in a day,” said Wattier, whose parents live with the family and are both high-risk. “It’s a lot to think about. It’s my job. It’s something I choose to do, it’s something I love. Now it comes at a really high risk.’’

The American Academy of Pediatrics, whose guidance the Trump administration has cited to support its demands, says the goal is for all students to be physically present in school. But, it adds, districts must be flexible, consult with health authorities and be ready to pivot as virus activity waxes and wanes.

“It is not that the American Academy of Pediatrics thinks this is a done deal because we have put out guidance,” said Dr. Nicholas Beers, a member of the academy’s school health council. “But what we do know is that we need to have a more realistic dialogue about the implications of virtual learning on the future of children. We have left whole swaths of society behind, whether it’s because they have limited access to a computer, or broadband internet,” or because of other challenges that online education can’t address.

DeVos said local school officials are smart enough to know when conditions are not right.

“There’s going to be the exception to the rule, but the rule should be that kids go back to school this fall,” she told CNN's “State of the Union."

“And where there are little flare-ups or hot spots, that can be dealt with on a school by school or a case by case basis.”

Following CDC and academy guidelines would mean big changes for most schools. Mask-wearing would be strongly encouraged for adult staff and students except the youngest. Desks would be distanced at least 3 feet apart; the CDC recommends 6 feet. Both suggest limiting adults allowed in schools, including parents, and canceling group activities like choir and assemblies. Staggered arrival and dismissal times, outdoor classes, and keeping kids in the same classroom all day are other options.

DeVos defended that stance, saying, “American investment in education is a promise to students and their families.”

“If schools aren’t going to reopen and not fulfill that promise, they shouldn’t get the funds, and give it to the families to decide to go to a school that is going to meet that promise," she said on “Fox News Sunday."

“They’re messing, the president and his administration are messing with the health of our children," the California Democrat told CNN's “State of the Union."

While most funding typically comes from state and local sources, experts say schools will need more federal funding, not less, to reopen safely. Masks, extra cleaning supplies or janitors, additional classroom space, and mental health support for students and staff traumatized by the pandemic are among potential costs. And with more parents out of work, more children will qualify for federally funded school lunches.

Some colleagues are considering not returning to the classroom because their children’s day care centers aren’t reopening. Some say they won’t come back until there’s a vaccine.

“I am concerned and it’s because of the age group,” Morales said. ‘’Middle school students ... are lovely and I love them, but they touch, they get close, they roughhouse. It is their nature. They’re 13 years old. They are defiant.”

“If masks are required and a kid isn’t wearing a mask, is my job description going to be to chase down this kid and insist they wear a mask? And what if they don’t?’’

Dr. Emily Landon, a University of Chicago infectious disease specialist, is helping the university and a campus preK-12 school decide how to reopen safely.

“Things are evolving from, ‘We can’t do it unless it’s perfectly safe’ to more of a harm reduction model, with the caveat that you can always step back” if virus activity flares, Landon said.

Single-occupancy dorms, outdoor classes, socially distanced classrooms and mask-wearing by students and faculty are on tap for the university. Face coverings will be required at the school too. Policies may change depending on virus activity.

She dismisses complaints from some parents who say masks are a loss of personal freedom.

“It’s not harmful for your child,” she said. “If you see wearing masks as a loss of personal freedom, then you have to think the same of pants.”

Dr. Tina Hartert of Vanderbilt University is leading a National Institutes of Health-funded study to determine what role children play in transmitting COVID-19. Almost 2,000 families are enrolled and self-test every two weeks. The idea is to find infected children without symptoms and see how easily disease spreads within families. Results may come by year’s end.

“If we don’t see significant transmission within households, that would be very reassuring,” Hartert said.

She noted that in other countries where schools have reopened, evidence suggests no widespread transmission from children.

In France, public schools reopened briefly before a summer break, with no sign of widespread virus transmission. Masks were only required for upper grades, but students stayed in the same classroom all day. A better test will be when the new school year starts Sept. 1.

In Norway, schools closed in March for several weeks. Nursery schools reopened first, then other grades. Children were put in smaller groups that stay together all day. Masks aren't required. There have been only a few virus cases, said Dr. Margrethe Greve-Isdahl of the Norwegian Institute of Public Health, but she noted virus activity is much lower than in the U.S.

Kati Spaniak, a realtor in Northbrook, Illinois, says her five teenage daughters have struggled to cope with pandemic fears, school closures and deficits of online learning. She strongly supports getting kids back in the classroom, and all her girls will return to some form of that in the fall.

It’s been hard for her high school senior, Kylie Ciesla. Prom, graduation and other senior rituals were canceled, and there were no good-byes. “Just to get ripped away from everything I’ve worked for 12 years, it’s really hard,” Kylie said.

At college, classes will be in person, masks mandated and a COVID-19 test required before she can move into her dorm. Kylie isn’t sure all that is needed.

“I hate that this thing has become so political. I just want the science. I want to know what we need to do to fix it,” she said.

AP reporters John Leicester and Arno Pedram in Paris contributed to this report.

The Associated Press Health and Science Department receives support from the Howard Hughes Medical Institute’s Department of Science Education. The AP is solely responsible for all content.