Some rural counties in Western New York have some of the lowest population percentages in terms of first dose vaccinations. Allegany County is last in the state. 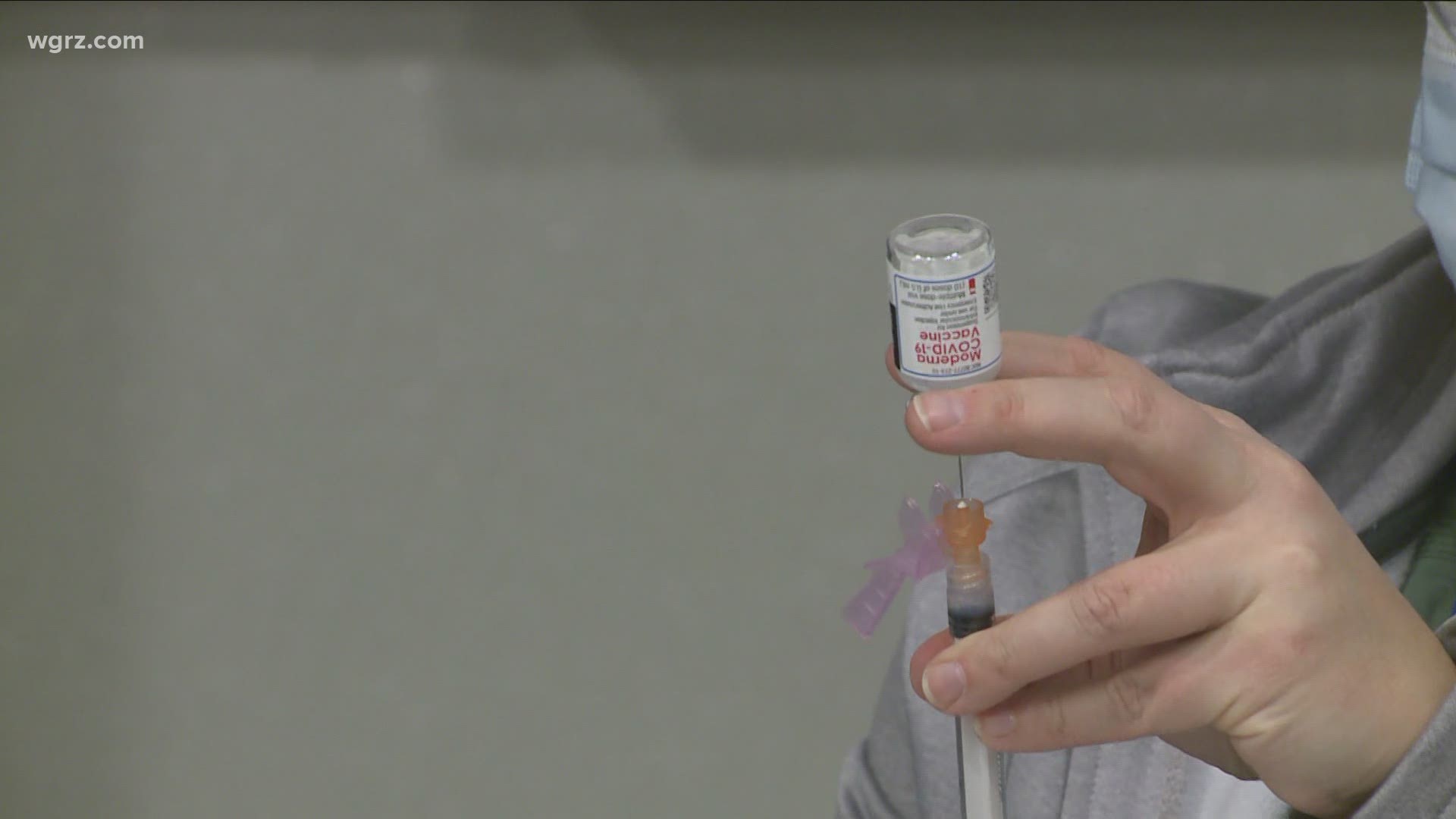 BUFFALO, N.Y. — Amid so many challenges with the vaccine rollout, a couple local counties are among the lowest in the state with getting residents vaccinated.

Some health officials believe where they're located has something to do with getting significantly fewer doses of COVID-19 vaccine.

According to New York State's Vaccine Tracker, Allegany County, has the lowest population percentage with at least one vaccine dose – at 7.4 percent of the county's population.

"I don't think there's anything particularly different we're doing or not doing, we're involved in the same hub calls the western region is involved in," said Tyler Shaw, public health director in Allegany County, "As of right now, we have no additional first doses to go out the door."

Also low in that category: Orleans County at 7.9 percent. For some perspective, Erie County leads all WNY counties with nearly 13 percent of the population with at least one shot of vaccine.

"We understand the population divide and making sure allocations are based appropriately based on population, but ultimately we need increases in our local communities and not just Genesee and Orleans, but all the rural counties," said Paul Pettit, the public health director for Genesee and Orleans counties.

Pettit says vaccine allocation in both counties has been either cut or remained flat in recent weeks. This at a time, when the federal government and the state have been promising modest increases in supply.

"The challenges continue, we continue to hear about increased allocations from the state, we've been hearing that for weeks coming from the feds to the state, but that has not translated into increased local allocations for specifically rural counties," Pettit said.

Meantime, in Erie County, the county health department expects to see a modest increase from last week to this week.

2 On Your Side asked the state health department and the governor's office about vaccine allocation to rural counties.

A spokesperson for the health department says this is all due to recent winter storms slowing down vaccine delivery.

Nola Goodrich-Kresse, public information officer in Orleans County wrote in an email: "Based on the most recent data, Orleans County has received the third lowest allocation of vaccine in the Finger Lakes Region since it was initially distributed to date.  There are also fewer healthcare providers in the county resulting in less eligible in the 1A prioritization groups early on.  According to the 2020 County Health Rankings and Roadmaps, Orleans has a ratio of 13,660 patients to 1 provider. We have seen by the allocations to date that rural counties continue to receive less vaccine proportionally than larger urban counties.  We're hopeful that as initial vaccination data is released, it will continue to show these disparities and lead towards increased allocations reaching our residents. Access to health care and transportation issues are very prevalent in the rural areas which limits the ability of our residents to reach current state run mass vaccination sites.  Today, Genesee, Orleans and Wyoming Counties formally requested from the Governor a state run mass vaccination site at GCC to increase closer access and increased allocations of vaccine to our residents."

Assemblymember Steve Hawley writes in a statement: "The vaccination distribution to rural parts of the state has been concerning thus far, to say the least. While it's bad enough vaccine allocations have remained flat in recent weeks throughout rural areas of the state, here in Orleans County distribution has slowed since the amount of doses the county received was cut from 400 to 200 for the week of February 8th. We have reached out to the state Health Department regarding this shortage and, while they said they would look into it, we have not heard back. This shortage must be addressed immediately to stop the spread of COVID-19 through rural upstate New York and to save lives. Because we are all New Yorkers, no matter where we live."

State Senator Ed Rath issued a statement: "This is an issue I have been hearing about for the past few weeks. It came up in a round-table that I hosted in January.

I was going to be visiting a vaccination site in Genesee County tomorrow but unfortunately they had to cancel the appointments due to lack of vaccine. This is completely unacceptable and extremely concerning.
As Ranking Member of the Local Governments Committee, I have been working to facilitate a conversation between our local governments and the State. I have reached out to the Department of Health multiple times trying to get answers and have not heard back. This is unacceptable. I will continue to seek answers."