Bowlers sending pins to Cuomo, hoping businesses will be spared

Bowling alleys and their customers are striking up a campaign in hopes the governor will spare them some consideration. 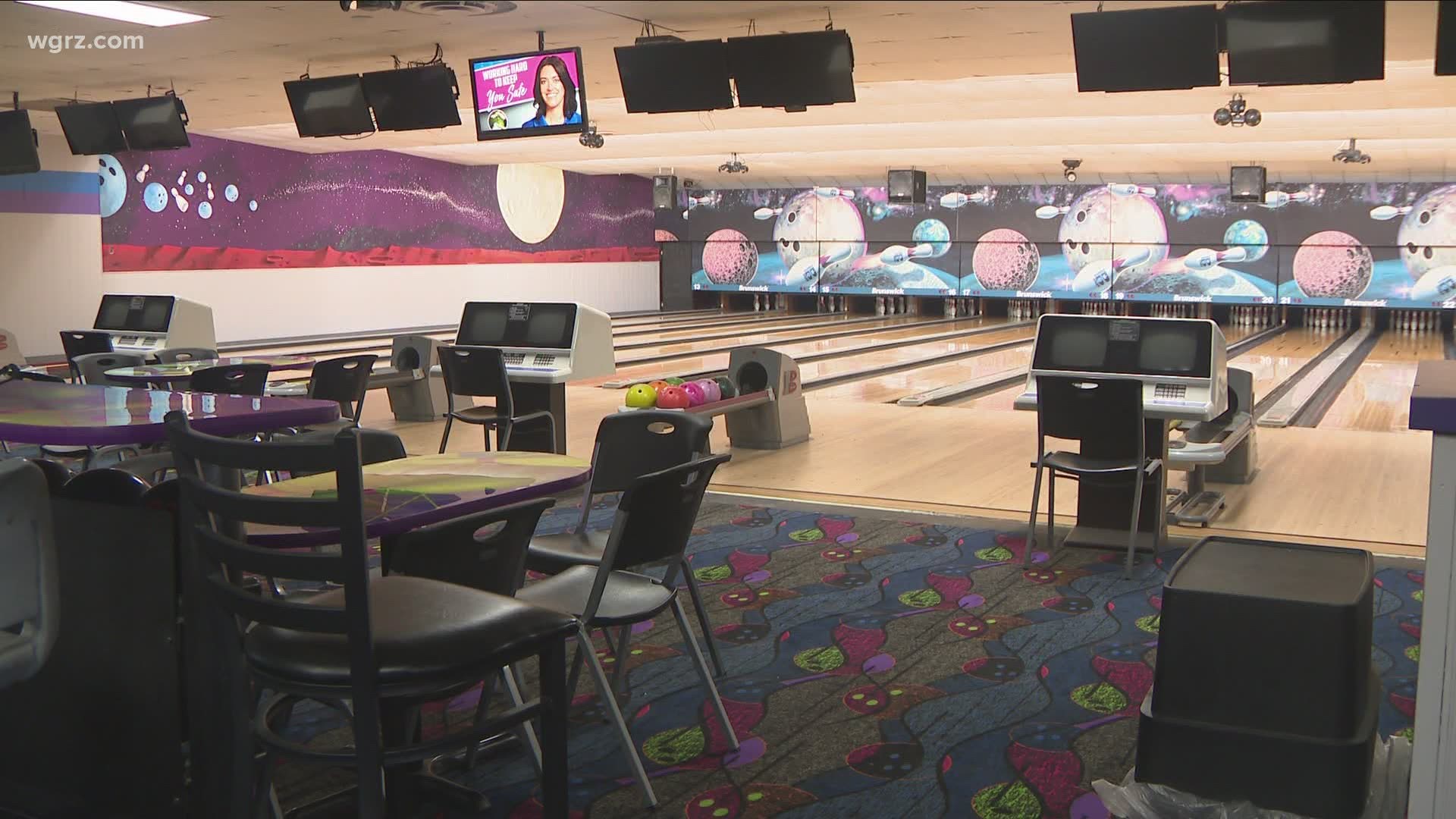 GRAND ISLAND, N.Y. — Bowling centers are among the businesses that have yet to be allowed to resume operations under the state's phased in reopening plan.

As you might imagine, that's a real bummer in Buffalo, where bowling is popular.

On Grand Island, the silence inside Mallwitz’s Island Lanes on Whitehaven Road is deafening, exceeded perhaps only by the silence from Albany on when bowling might be allowed to resume.

“We haven’t heard anything about a date or a possible date for re-opening, or if they are even considering it,” said Mike Mallwitz, whose family has owned the bowling center for 40 years.

That has been a sentiment expressed by owners of businesses of all types under New York’s phased re-opening, who have typically had to wait until the eve of re-opening to receive even scant information from state regulators on how they must proceed.

Mallwitz, however, has already developed a plan to be able to operate when things get rolling again.

Rolling out a plan for bowling

Throughout the bowling center there are already signs up with protocols for the patrons they hope will someday return to follow. They even have a business operation plan in place to comply with whatever the rules may be.

Bowlers typically are six feet apart on the lanes to begin with, Mallwitz noted.

“One idea we have is to just utilize every other lane,” he said, explaining that under that scenario bowlers would be 12 feet apart.

That’s the same distance he has already put between the empty tables throughout his family’s establishment.

He also says they could sanitize the keyboards, scoring monitors, and seats surrounding them when one group of bowlers is finished using them.

“After one party is done, we would put up a sign to say this lane is out of service until our employees can freshly clean everything,” he said.

He also believes bowling centers could operate safely if patrons wore masks anytime they left the lanes to go the bar or the restroom, which is the case for restaurants offering indoor dining, and to which he sees no difference from a bowling alley.

“Well right now if you go to a restaurant you can sit with up to ten people, right? They don’t have to live in the same household, you just have to say you’re together,” Mallwitz said in his response to those who might suggest that bowlers couldn’t socially distance when seated near each other when gathering to play.

Even if the state were to mandate that bowlers had to bring their own balls and shoes, Mallwitz said, “It that’s what it took, then that would be OK with us."

Bowling centers and their patrons are striking out on a campaign aimed at getting @NYGovCuomo to spare them some consideration, as some alleys are nearing their final frame. (And the Gov. is about to get some interesting mail) The story at 4pm on Most #Buffalo on @WGRZ TV 2 pic.twitter.com/sV23DDbVBT

Hoping the governor will spare them

Having already lost the lucrative late spring season, bowling alley proprietors hope they can resume league play in September, because if they can’t, many of them will be on their final frames financially.

“I already know of two bowling centers which have closed and will never reopen, and there will be a lot more if we can’t resume,” Mallwitz said.

Bowling alleys and their customers are now striking up a campaign in hopes New York Gov. Andrew Cuomo will spare them some consideration, and the governor is about to receive some interesting mail.

“Our idea to get some attention was to send him bowling pins, so bowling centers statewide are giving away pins to their customers to mail to the governor with a message written on bowling pin explaining why they think it's important for bowling to be open again," said Mallwitz, who added that bowling centers aren’t the only ones in danger of going under.

“Every bowling pin used in every bowling alley in the country comes from just one factory, and that’s located in Upstate New York," he said.

Mallwitz is referring to QuibicaAMF, which is the only plant in the nation that makes United States Bowling Congress-approved bowling pins, which are needed for league play.

They are manufactured in Lowville, Lewis County.