Public vs. private: A timeline of President Trump's comments on coronavirus

Here's a look at some of the president's public and private commentary during the early months of the pandemic that to date has killed about 190,000 Americans. 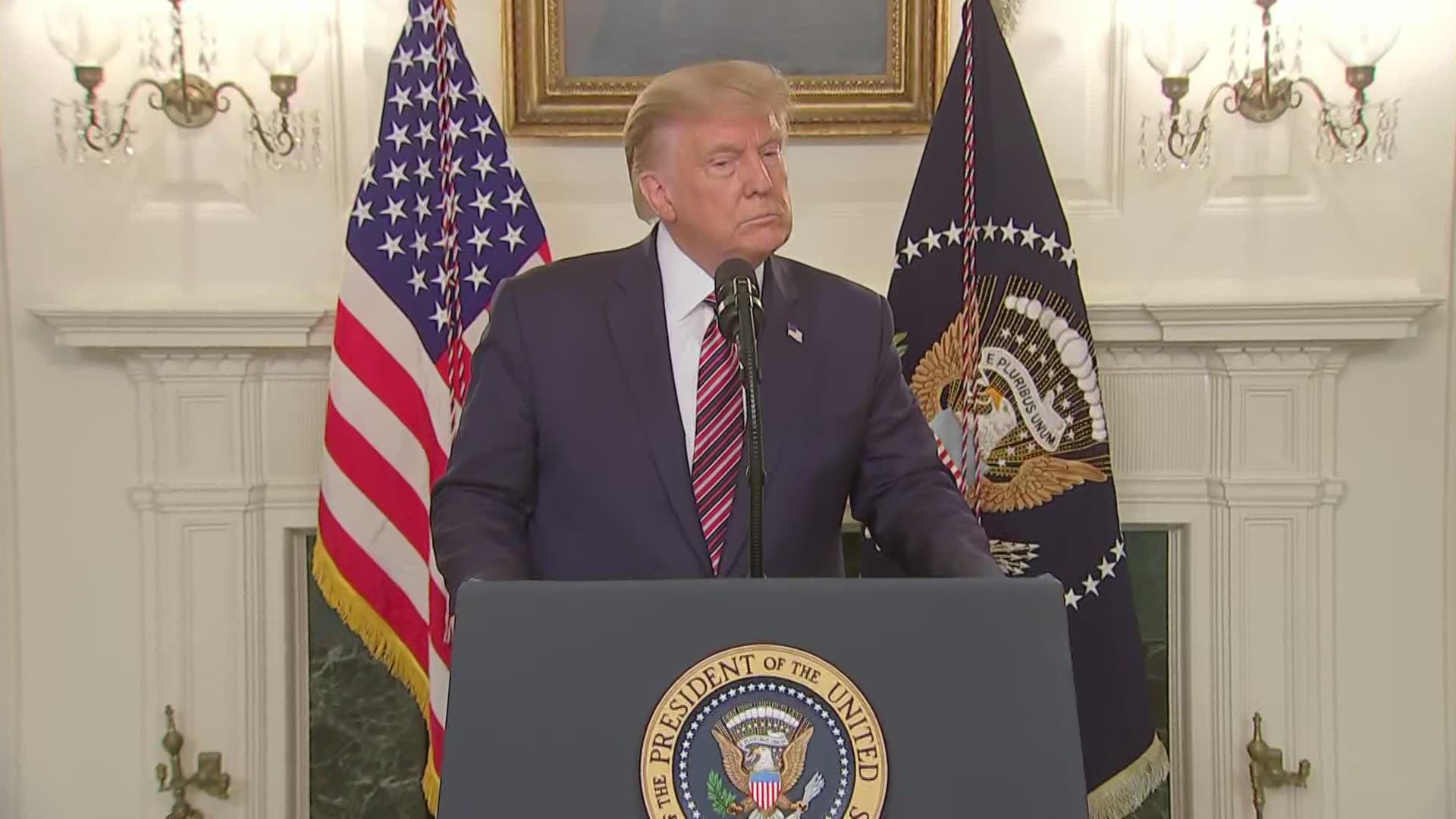 WASHINGTON, D.C., USA — President Donald Trump's comments on the threat posed by the coronavirus have varied widely depending on whether he was speaking in public or private.

Journalist Bob Woodward, in his forthcoming book "Rage," reports on a series of interviews with Trump in which the president privately acknowledged the severity of the virus even as he played it down in public. Excerpts of the book were published Wednesday by The Washington Post and CNN, which also aired audio of some of the interviews.

A look at some of the president's public and private commentary during the early months of the pandemic that to date has killed about 190,000 Americans:

"We have it totally under control." — During CNBC interview on sidelines of economic forum in Switzerland. A day earlier, federal officials reported the first case of COVID-19 in the United States. "It's one person, coming in from China," Trump said. "It's going to be just fine."

"China has been working very hard to contain the Coronavirus. The United States greatly appreciates their efforts and transparency. It will all work out well. In particular, on behalf of the American People, I want to thank President Xi!" — Trump tweet.

"Hopefully it won't be as bad as some people think it could be. But we're working very closely with them and with a lot of other people and a lot of other countries. And we think we have it very well under control." — During trade event in Michigan.

RELATED: 'I wanted to always play it down,' Trump says of coronavirus in journalist's book

"You just breathe the air and that's how it's passed. And so that's a very tricky one. That's a very delicate one. It's also more deadly than even your strenuous flus." — Trump phone interview with Woodward.

"The 15 (case count in the U.S.) within a couple of days is going to be down to close to zero. ... This is a flu. This is like a flu." — During White House coronavirus task force briefing.

"You have to be calm. It'll go away." — During visit to Atlanta headquarters of the Centers for Disease Control and Prevention.

"No, I'm not concerned at all. No, I'm not. No, we've done a great job." — After working dinner with Brazilian President Jair Bolsonaro.

"We've done a great job because we acted quickly. We acted early. And there's nothing we could have done that was better than closing our borders to highly infected areas." — During Rose Garden announcement declaring a national emergency.

"I've spoken actually with my son. He says, 'How bad is this?' It's bad. It's bad. But we're going to — we're going to be, hopefully, a best case, not a worst case. And that's what we're working for." — During White House briefing.

"To be honest with you, I wanted to always play it down. I still like playing it down, because I don't want to create a panic." — Interview with Woodward.

"I want to keep the country calm. I don't want panic in the country. I could cause panic much better than even you." — Responding to reporter's suggestion that he offered false assurances to Americans.

"I love our country and I don't want people to be frightened. I don't want to create panic, as you say. Certainly, I'm not going to drive this country or the world into a frenzy. We want to show confidence. We want to show strength." — Talking to reporters and dismissing Woodward's book as a "political hit job."