So now while some are even building greenhouses, others hope they can extend the outdoor experience with the help of portable heaters. 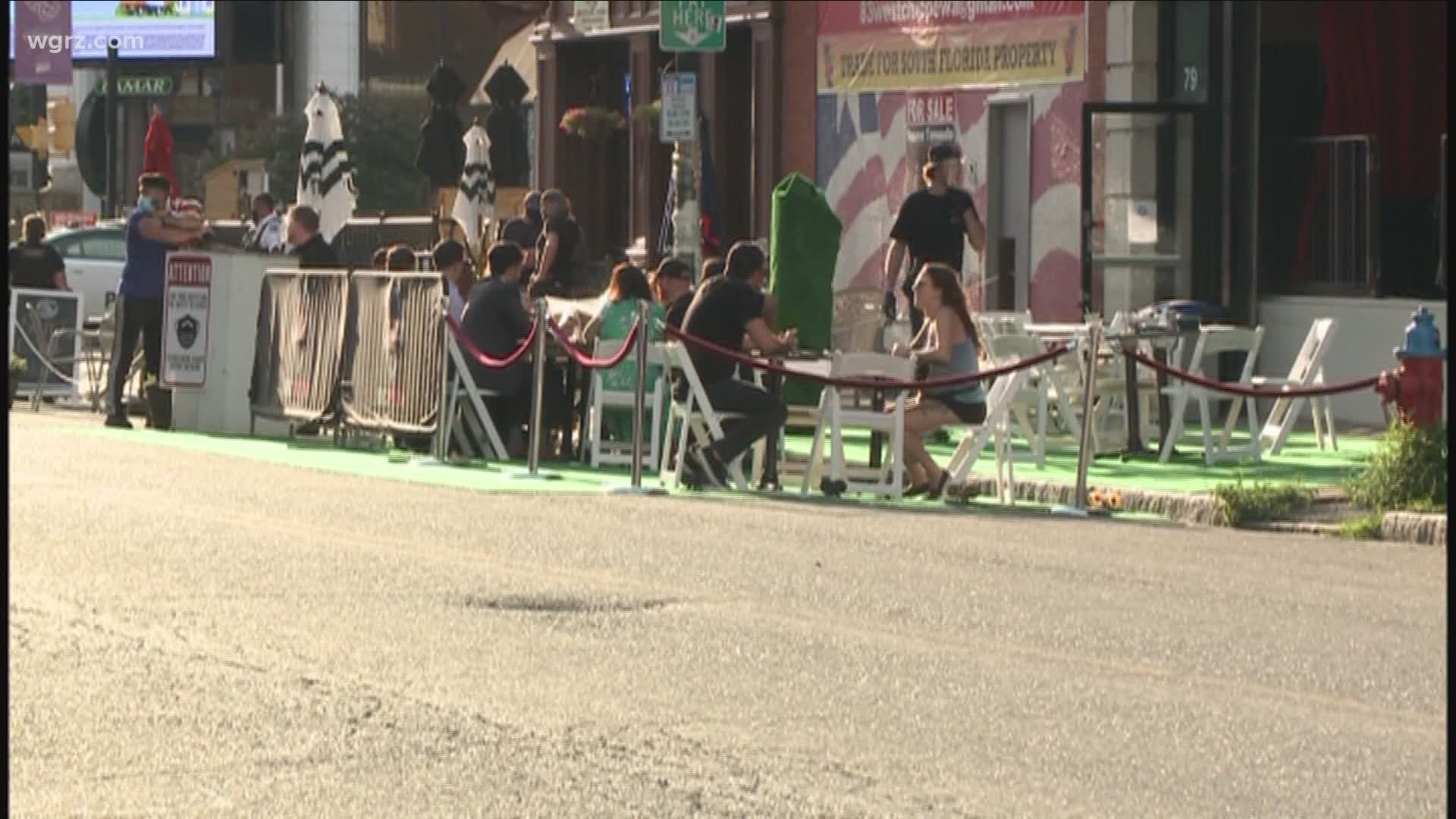 BUFFALO, N.Y. — Restaurant owners have a lot on their plates these days with trying to stay open amidst the constraints of COVID-19. Now with the weather changing the outdoor dining option may be on borrowed time.

The sidewalk, the patio, the parking lot, and even the street on Chippewa, all became acceptable and welcome warm weather dining options for restaurant owners in Buffalo and elsewhere in Western New York as they were starving for business.

So now while some are even building greenhouses, others hope they can extend the outdoor experience with the help of portable heaters. But if they're powered by propane, the most common and affordable energy source, some are telling us they found out it's technically illegal under the fire code.

City Council is aware as Delaware District Councilman Joel Feroleto told 2 On Your Side, "Right now it appears that they're not allowed in the City of Buffalo and I have not been able to get any clear guidance or rules."

Feroleto, who represents Hertel Avenue with many restaurants, is actually pushing a resolution to get the city's Permits and Licensing Department to get back to council by next Tuesday with guidance on propane heaters for restaurants. And then if they get a thumbs down he says, "We've already started drafting legislation to make them permittable in the City of Buffalo."

We contacted Buffalo Mayor Byron Brown's spokesman on this question and so far we have not received a response.

Feroleto says outdoor dining has been a lifeline for these businesses, which he adds may have employed up to 50,000 people in Erie County pre-COVID. As he puts it, "We've heard from a lot of restaurant owners that it's very challenging for them to even pay their bills let alone make a profit with the 50 percent capacity rule in place."

A similar effort to permit propane heaters for restaurants is also underway in New York City. 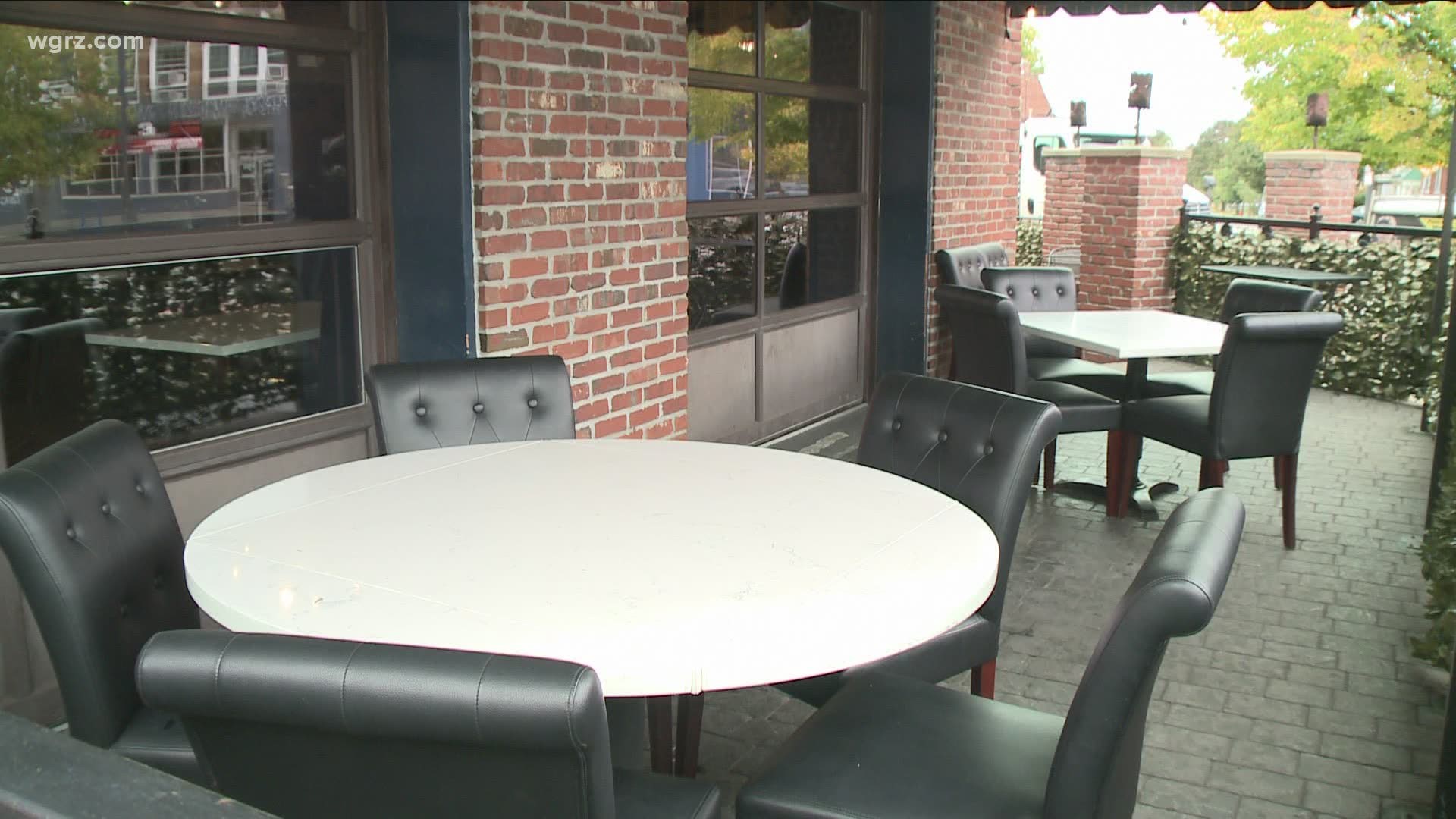 This may further raise the question for customers about whether or not they want to continue doing outdoor dining or actually go into a restaurant to eat with potential contact and exposure.

That's why the owner of the Lake Effect Diner and the Steer Restaurant is not just trying to make sure everything inside is spic and span, but also thoroughly sanitized.

And Tucker Curtin says with limited capacity issues, they've adapted with options such as booths for the diner with an unusual shower curtain barrier, which are also being used by some barber shops and beauty salons to keep proper distance between customers. Curtin says the 50 percent capacity keeps the customer limit at 29. But it could be worse without the shower curtain barriers.

"This has helped tremendously and allowed us to stay open because without these shower curtains we'd probably only be able to have ten or twelve people in the building," Curtin said.

Over in the Steer there is another barrier in the form of partitions at the bar.

"The wood that they're made from is the two by fours that we use when we boarded up the establishment and were closed for six weeks," Curtin said. "So we recycled that product and bought some Lexan and created more space so we can allow people to sit at these two seats rather than — you know this is six feet apart — rather than leaving a blank space here."

Elsewhere in the dining area they have some space to work with. But they may try to extend use of their patio as well by opening adjacent garage doors and cranking up a cozy fireplace.

Curtin says even with the constant sanitation effort on surfaces he's also focusing on air quality.

"We purchased MERV-13 air filters for all of the facilities - medical grade - and we bought those three days before the governor started talking about malls and gyms putting in these special filters," Curtin said.