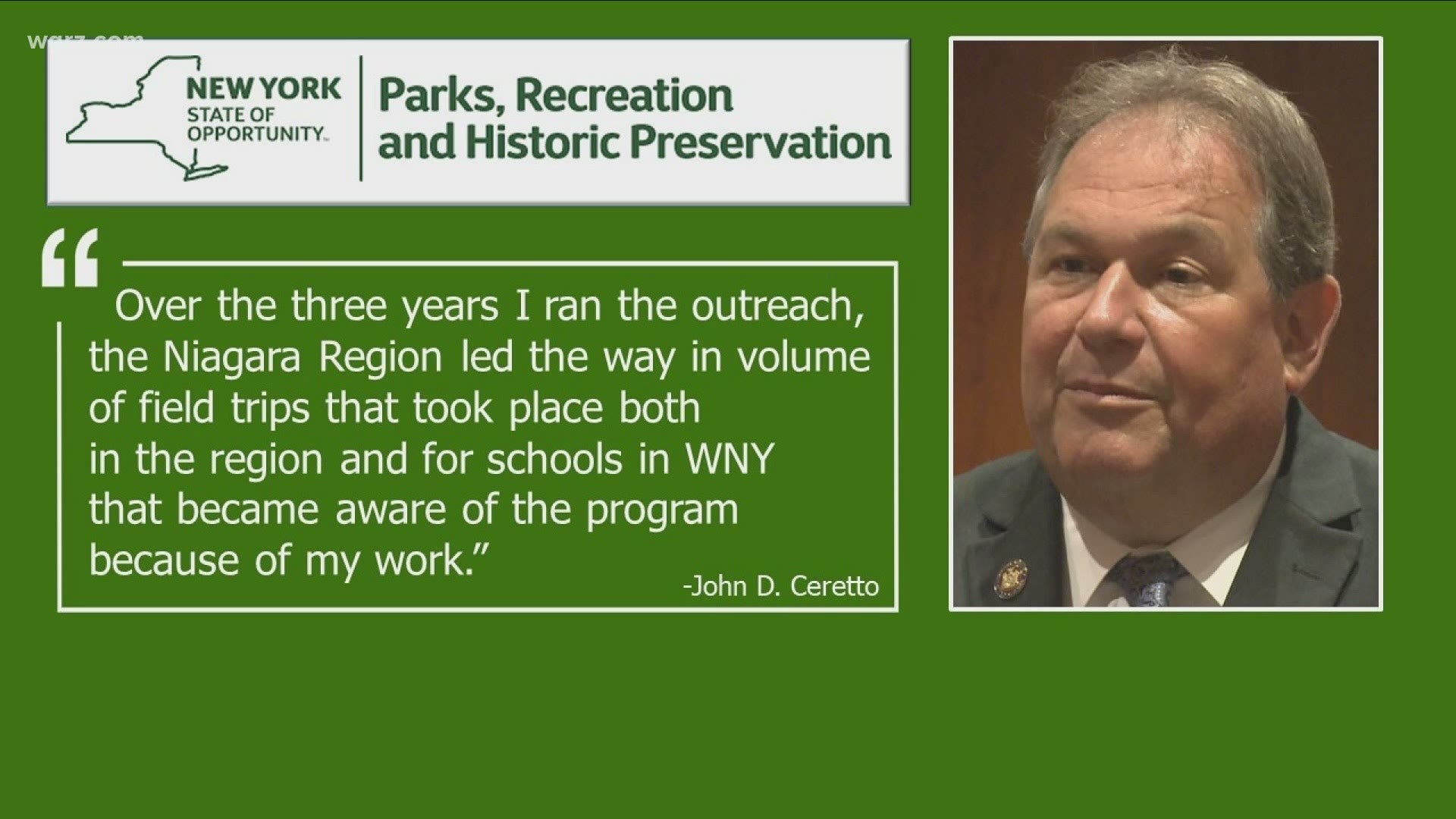 NIAGARA FALLS, N.Y. — This story began as a tip from a viewer that frankly, was hard to believe at first.

An email from Darrell Borkenhagen said, “Hi, Steve, with the nicer weather I have been taking more frequent walks around Niagara Falls State Park and I have been seeing former NYS Assemblyman John Ceretto walking around the park with an orange bucket and grabbers picking up litter.”

At first, we thought the tip was likely connected to a couple of annual events featuring New York’s state park. There was the “I Love My Park Day” which encourages the public to help lend a hand in the spring clean-up at the park. There was also recently Earth Day, which has all kinds of events that involve volunteers picking up debris.

So, we emailed Borkenhagen back asking, “Any chance you snapped a picture?”

Minutes later we were sent the picture you see above. It’s a blurry shot of someone standing next to a vehicle with an orange bucket on the ground. The photo was not conclusive.

2 On-Your-Side knew Ceretto worked for State Parks. But his job assignment did not seem to include maintenance.

The former three-term Democratic Assembly Member leads the ‘Kids Connect’ program for the western region of the state. It’s a program which offers a state subsidy to schools in hopes they will take more field trips to state park and historic sites.

Park’s Department spokesman Dan Keefe explained by email that COVID had forced many state employees to be reassigned.

“Ceretto is splitting his time working with schools and helping maintain the park,” said Keefe.

It was confirmation that Ceretto, a former lawmaker on the state payroll was picking up trash at Niagara Falls State Park.

That got us interested in Ceretto’s employment history with the state park because before being elected to the Assembly, he was a member of the Niagara Regional Environmental Education Team operating out of the park’s Discovery Center.

Specifically, 2 On-Your-Side wanted to know how much Ceretto was being paid. For that, we turned to the website See Through NY, run by the fiscally conservative watchdog organization The Empire Center.

Data from the website indicated that in Ceretto’s last full year with state parks was 2010, the year he was first elected to the Assembly, 2010.

After his six years in the Assembly, Ceretto returned to state parks in 2017 with a new title, “Project Manager” and more than twice his previous pay at $78,368.

It’s a very nice income for someone whose duties include trash pick-up. 2 On-Your-Side did reach out to Ceretto. We wanted to speak to him about his job and the new maintenance assignment. What we got was a statement from Ceretto, which included him touting his work on the school field trips.

“Over the three years I ran the outreach, the Niagara Region led the way in volume of field trips that took place both in the region and for schools in Western New York that became aware of the program because of my work,” said Ceretto.

About this, we spoke with the man who knocked Ceretto out of the Assembly, Republican Angelo Morinello. He said nice things about Ceretto and the job he was doing on school field trips, but added this, “There is no accountability in government. No one analyzes and looks at expenditures for the benefit of the taxpayers. We have multiple, multiple programs that have no accountability. Money is thrown at them. We don’t know what they’re doing.”

2 On-Your-Side only knows about this story because someone tipped us off.

This situation with Ceretto will soon end.

He’s retiring June 30th and has applied for his state pension. The State Comptroller’s office has not calculated how much Ceretto will receive.

Ceretto is in Tier 4 of the pension system, which largely averages three consecutive years of income when pay is the highest.

We do not know how much Cereto is making this year, but averaging salary figures for 2018-2020, it comes out to just under $94,000 a year that he can look forward to in retirement.