Thanksgiving Classic: In 1987, 'Planes, Trains and Automobiles' filmed in Batavia

It was the biggest thing to hit western New York in a while — and we’re not talking about a snowstorm. We’re talking Steve Martin and John Candy. 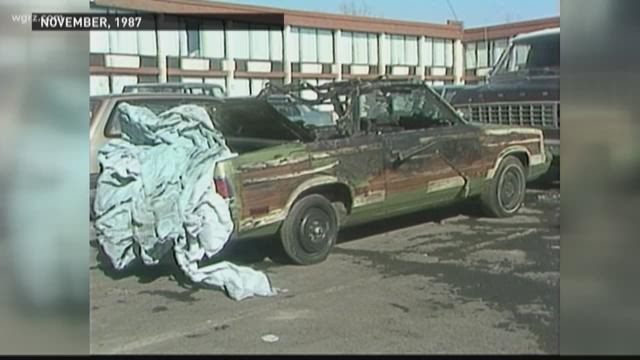 It was the biggest thing to hit western New York in a while — and we’re not talking about a snowstorm. We’re talking Steve Martin and John Candy.

In February 1987, Hollywood came to Batavia and communities in Erie and Cattaraugus counties.

The makers of a film called Planes, Trains and Automobiles needed locations that looked like the rural Midwest, only snowier.

Hundreds of locals answered a casting call for extras in the John Hughes comedy about mismatched traveling companions trying to get home for Thanksgiving. “I knew people here would be pretty enthused, but I didn’t think it would be like this,” casting exec Cathie Holzer told the Democrat and Chronicle about the massive turnout at a Batavia restaurant.

The extras were paid $50 for a 10-hour day, plus time and a half for overtime.

During the filming, Candy was seen around Batavia. He made a stop at a tavern, Heveron's Towne Manor, with a friend about midnight Feb. 24,1987. After playing electronic darts, Candy decided he was hungry. Nick Cinquino, a manager of the Pizza Partners, offered to make him "the best pizza in Batavia."

Candy agreed to go — but only if he could make the pizza. Cinquino opened the shop about 2:30 a.m. and Candy took over the kitchen. Candy kept the group up until 4:30 a.m.

South Dayton, a small village in Cattaraugus County, was used to film the scene set in the Kansas town of Stubbville. Crews there shot scenes of Martin, Candy and passengers inside a train leased from the New York-Lake Erie rail line.

During their breaks, the extras shivered in the 12-degree temperatures, grabbed cups of coffee and hot chocolate and ducked into the village fire hall for warmth. Martin and Candy, however, dodged spectators and spent their time in well-heated motor homes.

The snow was uncooperative for the filming in the area. It was a no-show, so a snow-making crew from Vermont was brought in. Then the snow showed up at precisely the wrong moment. During a scene where a trooper pulls over Martin and Candy in their burned-out car, a squall rolled in and covered the camera lenses. Eventually, the storm passed and filming resumed. And a holiday classic was born.