2 the Movies review: Far From Home is cheerful, Midsommar isn't

Marvel Fans distraught over the ending of Endgame will find relief Far from Home. 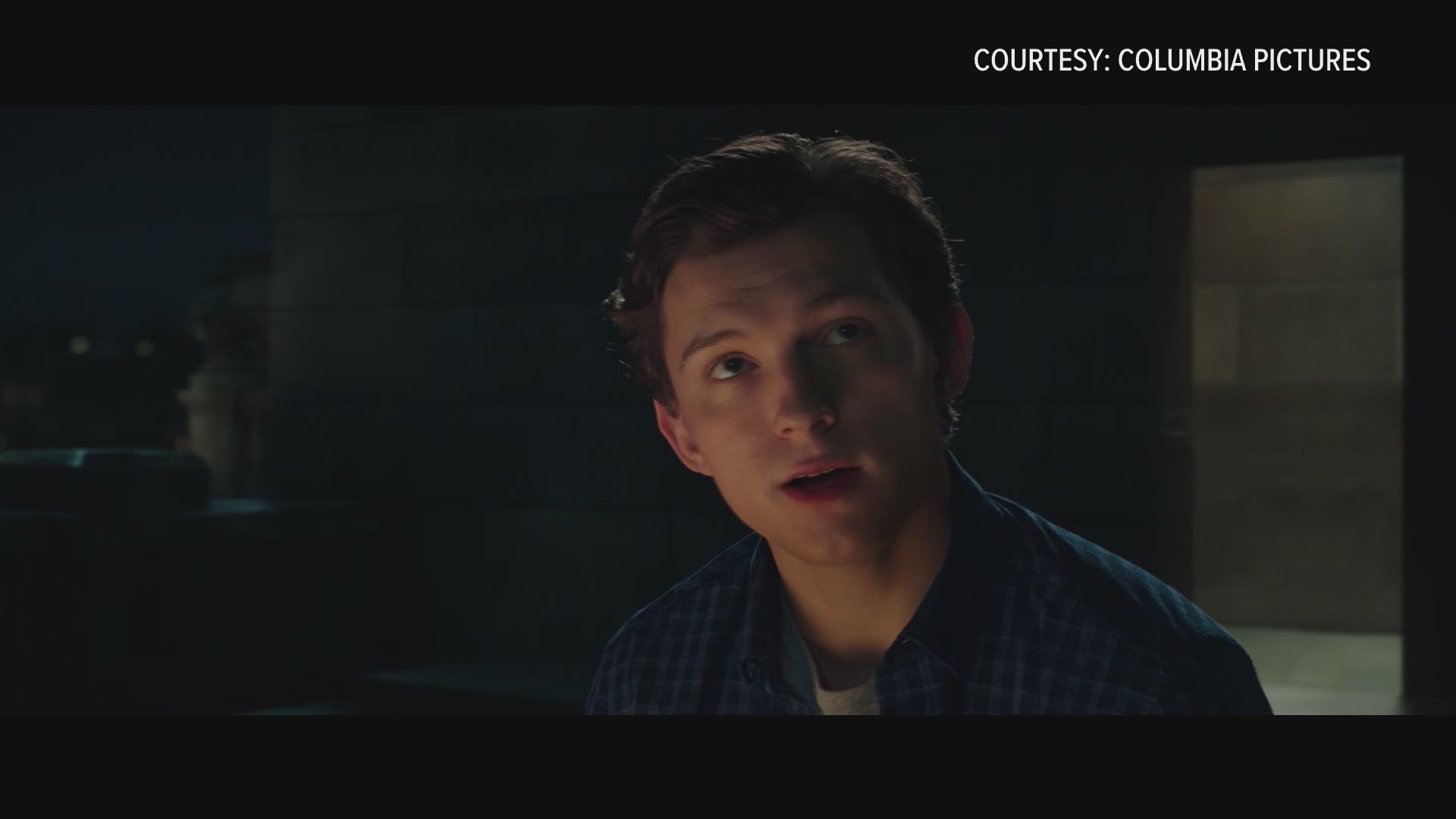 BUFFALO, N.Y. — After the end of Avengers: Endgame, and the tears, wailing and gnashing of teeth that that film engendered, could any film from the Marvel Comic Universe (MCU) ever hope to make us laugh again? Especially a film so tied to the end of Endgame. Well, whatever else one may say about Spider-Man: Far from Home, one must say this: it is terribly, terribly funny.

It’s about eight months after Endgame and the world is trying to cope with everyone being back.  Iron Man / Tony Stark, Black Widow / Natasha Romonova and Captain America / Steve Rogers are all posthumously remembered as world-saving heroes.

Credit: JAY MAIDMENT Copyright ©2019 CTMG, Inc. All rights reserved. **ALL IMAGES ARE PROPERTY OF SONY PICTURES ENTERTAINMENT INC. FOR PROMOTIONAL USE ONLY. SALE, DUPLICATION OR TRANSFER OF THIS MATERIAL IS STRICTLY PROHIBITED.
Samuel L. Jackson and Cobie Smulders in Columbia Pictures’ SPIDER-MAN: ™ FAR FROM HOME.

What a power couple!

Nick Fury (Samuel L. Jackson, Shaft, Snakes on a Plane) and Maria Hill (Cobie Smulders, Jack Reacher: Never Go Back, The Long Weekend) are investigating an unnaturally powerful storm in Mexico when they encounter an Earth Elemental who turns out to be responsible.  An apparent superhero, Quentin Beck (Jake Gyllenhaal, The Sisters Brothers, Stronger) show up and destroys the elemental.  Meanwhile, in New York City, the Midtown School of Science and Technology, where Peter Parker / Spider-Man (Tom Holland, The Current War, The Lost City of Z) attends, is planning a trip to Europe.  Parker, wanting a break from being Spider-Man so he can go on the trip and confess his feelings to MJ (Zendaya, Spider-Man: Homecoming, The Greatest Showman).  Toward that end, he keeps dodging calls from Fury.

Credit: Jay Maidment Copyright ©2019 CTMG, Inc. All rights reserved. **ALL IMAGES ARE PROPERTY OF SONY PICTURES ENTERTAINMENT INC. FOR PROMOTIONAL USE ONLY. SALE, DUPLICATION OR TRANSFER OF THIS MATERIAL IS STRICTLY PROHIBITED.
Samuel L. Jackson and Jon Favreau in Columbia Pictures’ SPIDER-MAN: ™ FAR FROM HOME.

Do you suppose that Fury is saying, "The path of the righteous man is beset on all sides ..."?

Happy Hogan (Jon Favreau, Love & Sex, Chef) delivers to Parker a set of wildly enhanced eyeglasses from the late Stark, that gives Parker access to E.D.I.T.H., an A.I. that can access all of Stark Industries resources. E.D.I.T.H., by the way, is a Stark-coined acronym that stands for “Even Dead, I’m The Hero.”  And it is with the delivery of that bit of information, that the devoted audience begins to realize that there may be laughter again at the MCU.  Anyway, according to Beck, who says he’s from an alternative Earth (number 822, to be exact) where the elementals have destroyed everything, that our Earth is facing the same threat.

Credit: JAY MAIDMENT Copyright ©2019 CTMG, Inc. All rights reserved. **ALL IMAGES ARE PROPERTY OF SONY PICTURES ENTERTAINMENT INC. FOR PROMOTIONAL USE ONLY. SALE, DUPLICATION OR TRANSFER OF THIS MATERIAL IS STRICTLY PROHIBITED.
Samuel L. Jackson is Nick Fury in Columbia Pictures’ SPIDER-MAN: ™ FAR FROM HOME.

Fury is obviously not in a mood to be told "no."

Fury wants Parker’s help in combating this threat and follows Parker to Venice to manipulate him into cooperation.

Spider-Man: Far from Home lacks the dramatic intensity of a typical super-hero action flick.  Oh, it’s got the action all right, and the special effects (more on those, later).  Now, it doesn’t suffer from that lack, not even a little bit.  In this reviewer’s opinion, MCU audiences needed a break from grinding intensity and this film provides that relief, and lots of it. In spite of all the blowings-up and gunfire and sweeping destruction, there is a rom-com kind of sensibility that engenders some authentic and very funny moments.  It strikes just the right blend of action and comedy so as to provide an antidote to the grim MCU of the past couple of films.  In that way, it is pitch-perfect.

The special effects are everything we’ve come to expect and demand from a big-budget blockbuster.  In fact, in a subtle and interesting way, some of them hearken back to the psychedelic animated effects of the last Spider-Man outing, Into the Spider-Verse.

Credit: JoJo Whilden ©2019 CTMG, Inc. All rights reserved. **ALL IMAGES ARE PROPERTY OF SONY PICTURES ENTERTAINMENT INC. FOR PROMOTIONAL USE ONLY. SALE, DUPLICATION OR TRANSFER OF THIS MATERIAL IS STRICTLY PROHIBITED.
MJ (Zendaya) catches a ride from Spider-Man in Columbia Pictures’ SPIDER-MAN: ™ FAR FROM HOME.

Both actors are in their early 20's but are playing high-schoolers.  It's the magic of Hollywood!

As far as the performances go, there isn’t a bad one in the lot.  Given the quality of the cast, that’s not at all surprising.  Perhaps this reviewer is abandoning his reviewer mantle in saying this, but there is really nothing to pick at.  Well, maybe Smulders seemed a bit wooden here and there, but that’s about it.

It webs in 5 out of 5 boxes of popcorn. Marvel Fans, if you thought you’d never laugh again post-Endgame, go see this movie so you can cheer up.

For those of you who just don’t wanna cheer up, our next film is the one for you.

Credit: Photo by Gabor Kotschy, Courtesy of A24
Gunnel Fred in Midsommar

It's gotta be okay, they're wearing festive hats!

Midsommar is a horror film set in a remote northern Swedish village.  A group of guys, grad students, all, plan a trip to experience a summer festival that's held only once every 90 years.  One of grads has a girlfriend who's currently recovering from the tragic loss of her parents and sister.

She wants to go along because she thinks it will be "fun". Well, with this festival, it's all fun and games until they break out the pagan rituals and things devolve from there. Unlike most horror films, Midsommar is brightly lit and absolutely sun-drenched. That, subtly, adds to the unease.  Directed by Ari Aster (Hereditary), Midsommar is a profoundly unsettling horror film worth a 4 out of 5 boxes of popcorn.  Florence Pugh (Fighting with my Family, The Commuter) is fantastic as Dani, the emotionally unstable girlfriend. I loved Midsommar, but I wouldn’t recommend it to anyone who isn’t a hard-core horror fan.  It’s a brilliant film, but at times it’s tough to watch. Midsommar is rated-R for disturbing ritualistic violence and grisly images, strong sexual content, graphic nudity, drug use and language. It runs 147 minutes

Credit: Photo by Csaba Aknay, Courtesy of A24
Isabelle Grill (center) and Florence Pugh (right) in Midsommar, an A24 Picture

After this film, I’ll never look at a woman wearing a flower crown in the same way again.

These films are both very good, but in very different ways.  I'm Larry Haneberg, and I'm taking you 2 The Movies.