A 'home way from home' for generations, Buffalo State College students may get a new name amid concerns the existing one 'memorializes' a connection to slavery. 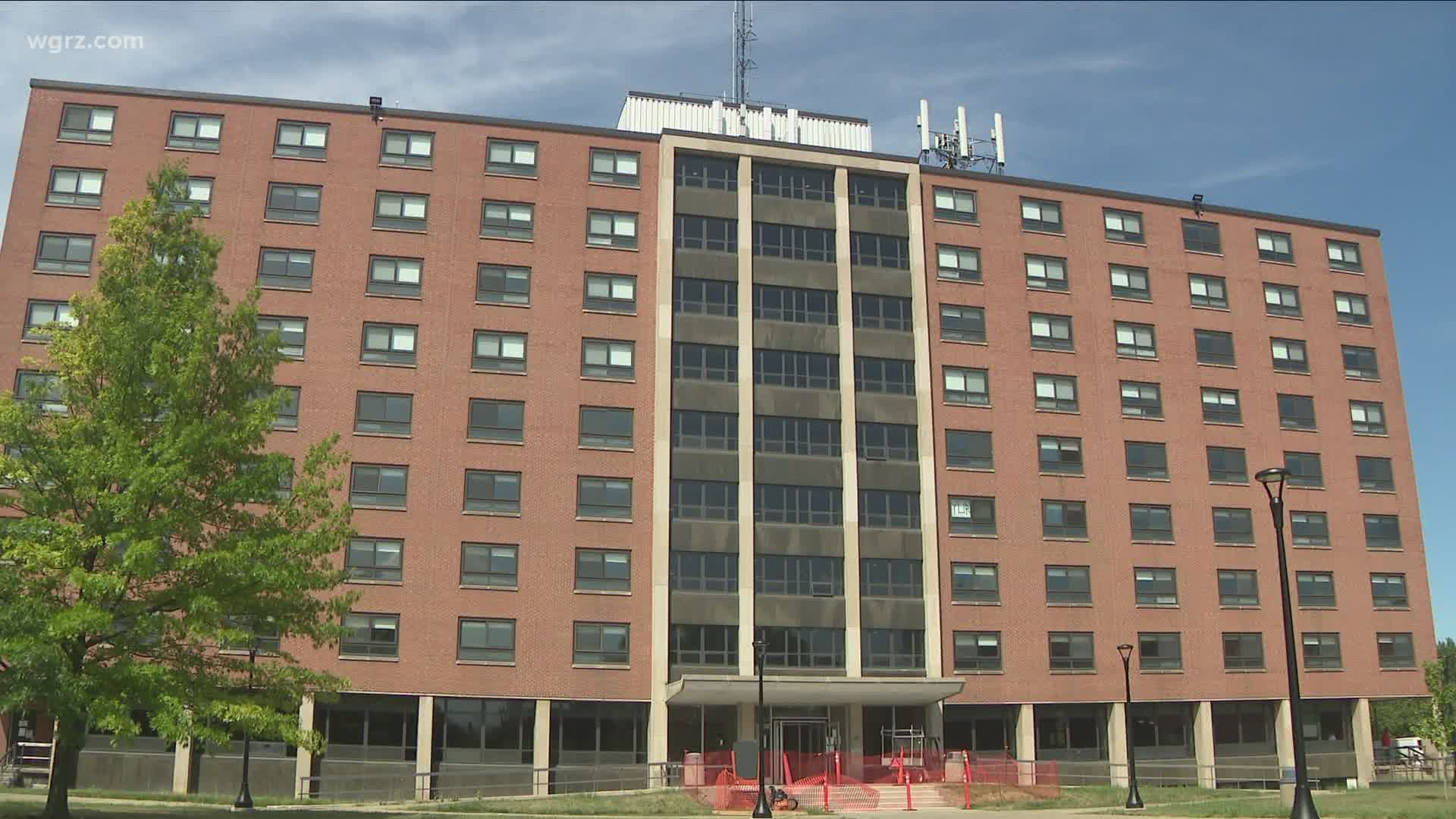 BUFFALO, N.Y. — A building that has served as a home away from home for generations of students at Buffalo State College now has a new, temporary name: Bengal Hall.

For 57 years, the nine-story structure has stood prominently on the Buff State campus.

Forty years ago, in 1980, Porter Hall was named in honor of Peter Buell Porter, a once-prominent Buffalonian who served as a state assemblyman, congressman, and cabinet member.

Porter was also a General in the War of 1812, in which he was regarded as a hero.

But now, college President Katherine Conway-Turner says concerns have been raised that Porter’s name also has a complicated history, of being a documented slave owner.

“I would like to thank Chairman Linda Dobmeier and the members of the Buffalo State College Council for meeting today and taking quick action to remove the name of Peter Buell Porter, a documented slave owner, from our residence hall and approving the building’s temporary name of Bengal Hall," Conway-Turner said in a statement Friday.

The new name is currently temporary, and will now be immediately used in signage and online references to the dormitory. The next step will be the SUNY Board of Trustees reviewing options for a new, permanent name.

Conway-Turner also says the college's Chief Diversity Officer, Crystal Rodriguez, will begin working with students and the campus community on process to permanently rename the hall, as well as any other buildings that may be identified in the future as having ties to slavery.

"As we look for a permanent name for Bengal Hall and review additional campus buildings and facilities for any connections to slave ownership, it is important to note that any new permanent names for these spaces, including Bengal Hall, will require SUNY Board of Trustees approval," Conway-Turner, said as part of a statement.

"Again, I thank the College Council for its action and steadfast commitment to Buffalo State College and our mission of supporting social justice for all.”

Within days, and at her request, a committee of the Buffalo State College Council recommended the name be removed from the building. 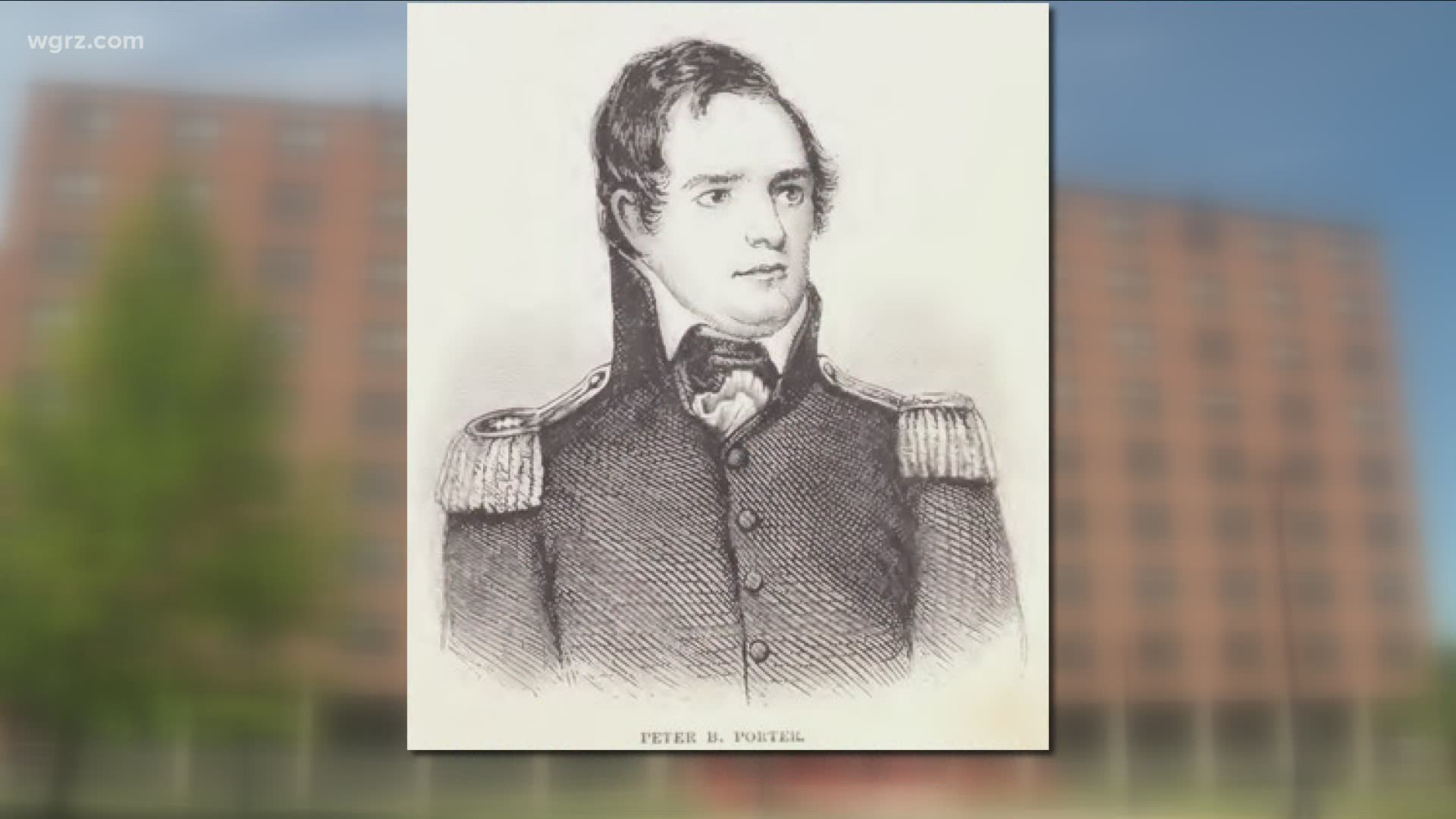 On Thursday, it appeared that Porter’s name had already been removed. President Conway Turner in her post did not indicate who alerted her to the concern.

However, there are documents held by the Buffalo History Museum (follow this link and go to page 93) which indicate that two centuries ago Porter and his wife Letitia Breckenridge signed an affidavit, indicating that she had brought five African Americans slaves from her father’s estate in Kentucky to New York.

While President Conway-Turner, in her posting, says Mrs. Porter’s intent involved “maintaining their enslaved servitude to work on their property in New York”, the document may also indicate that the intent in bringing the enslaved individuals to New York was to emancipate them.

In truth, the Calligraphy is so faded that it is difficult to discern precisely all of the wording contained in the document.

Fading from history? Special session of the College Council tomorrow at @buffalostate regarding changing the name of Porter Hall, after concerns were raised that the name on the building memorializes a connection to slavery. More at 4,5,&6 on @WGRZ TV 2 #Buffalo pic.twitter.com/vJxNvdA04R

The case that the five were still slaves

At the time the affidavit was signed by the Porters in 1820, New York was still in a phased in abolition of slavery which would finally conclude in 1827.

New York’s “Act for the Gradual Abolition of Slavery” passed in 1799, held that children of slaves born after July 4 of that year were” free” in the sense that they could no longer be bought or sold.

But it still allowed for them to be held for an extended period of indentured servitude (age 28 for males, age 25 for females).

Interestingly, and perhaps quite conveniently, the ages of the five individuals listed in the affidavit would indicate that they indeed could still be held as indentured servants of Mrs. Porter, who inherited them as “property” because they were all born after the act was signed, with the oldest two having been born in 1800, just after the Act was passed.

What this meant is that while the Porters may not have owned “slaves” in a legal sense, the five individuals Mrs. Porter had brought to New York from Kentucky in 1820 could still be legally held to serve her- with no wages required- for at least the next seven years.

Therefore abolitionists at the time criticized the “Act for the Gradual Abolition of Slavery ” of 1799 as no more than “redefining” of slavery, which would exist for certain individuals another 30 years.

Other Building Names Being Scrutinized

President Conway Turner has also directed a campus archivist and a history professor to review the names associated with other buildings on campus, to determine if there's anything objectionable in the history of those persons, in order to determine if their names should be removed as well.

Meanwhile the Porter and Breckenridge names remain prominent in Buffalo and in Niagara Falls where streets are named after the couple as well as several of their descendants.