Cuomo on gun violence: 'It is a statewide problem and it is an emergency'

Tuesday Gov. Andrew Cuomo declared a disaster emergency on gun violence and announced his plan to further combat gun violence across the state. 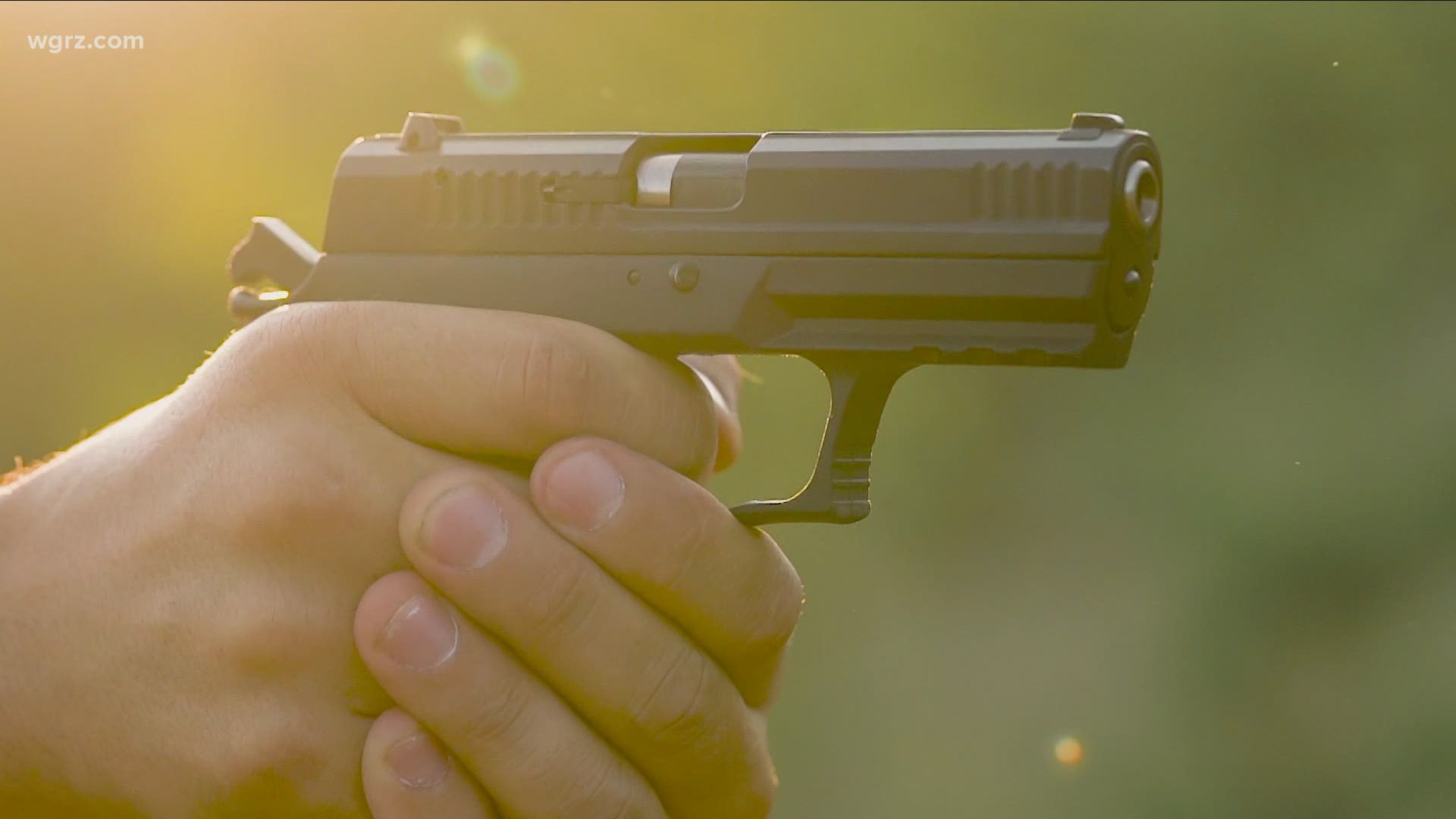 BUFFALO, N.Y. — According to Buffalo Police Captain Jeff Rinaldo, over the Fourth of July weekend, there were 13 shooting incidents in the City of Buffalo that resulted in 21 victims including a three-year-old child.

During a news conference, Rinaldo stressed that this level of violence affects everyone and, as a community, we have to come together to address it.

"Nobody, I don't care what part of the city you live in, should have to live in daily fear of these shootings so we have to put an end to this," Rinaldo said.

However, the increase in gun violence is a problem that is bigger than just Buffalo.

Cuomo said the declaration allows the state to give the gun violence crisis the full attention and resources it deserves, calling it a "first-of-its-kind" executive order.

"If you look at the recent numbers, more people are now dying from gun violence and crime than COVID," Cuomo said. "This is a national problem but someone has to step up and address this problem because our future depends on it."

In addition to announcing that executive order, Cuomo announced the creation of the Office of Gun Violence Prevention that will be overseen by the Department of Health. He also announced a new State Police Gun Trafficking Interdiction Unit to stop illegal weapons from entering the state. 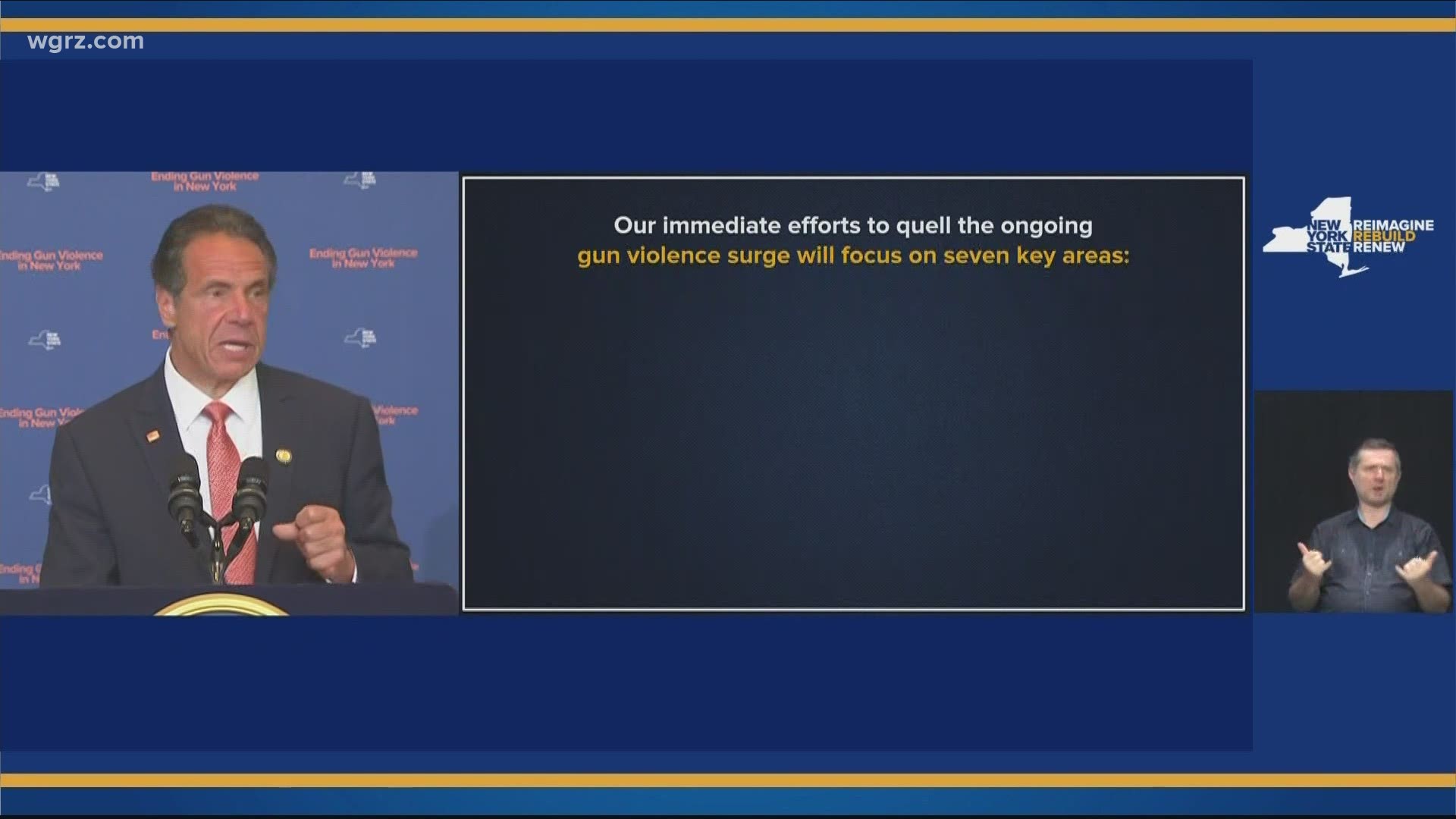 The short-term plans include seven different areas of focus, which will split $138.7 million in state funding to get started.

Some of the specific strategies Cuomo talked about on Tuesday were creating more jobs for at-risk youths, intervention programs for victims to help prevent retaliation, weekly reports from police departments statewide on shootings to identify hotspots, and closing the federal loophole allowing people with an active warrant to buy guns.

Cuomo also spoke about the need for police reform and improving the community-police relationship.

"We have to reform policing while addressing gun violence at the same time. It's not one or the other," Cuomo said.

"I think it's gonna be effective," Elmore said. "It's something that is needed. It's timely."

He stressed the importance of federal, state and local agencies working together to go after not only illegal gun users but also gun dealers.

"It looks to me like it's gonna be a comprehensive approach to go after the generators of the gun, the traffickers of the guns and to also try to solve the problems that are causing some of the youth to get involved in gang and violent behaviors," Elmore said.

However, there are some differences of opinion as to whether or not the governor's approach will work what led to the spike in gun violence in the first place.

Gallivan added, "Some of the things that the governor is saying are things that are not new that we need to address, but I think the single biggest problem is the relaxation of the criminal justice policies in New York State. We have policies that favor offenders and there's a sense of lawlessness running around out on the streets where individuals perpetrating these crimes and these shootings have absolutely no fear of being held accountable for their actions."

Captain Rinaldo also pointed to the bail reform and the lack of consequences for offenders and even repeat offenders in response to the spike in shootings in the City of Buffalo.

Additionally, the governor signed two pieces of legislation in an effort to combat gun violence.

And the bills are signed!

S.7196/A.6762-B:
✅Allows the public to hold gun manufacturers liable for their products creating a public nuisance

One allows the public to hold gun manufacturers liable for their products creating a public nuisance.

The other closes loophole to prohibit people with outstanding warrants from purchasing guns in New York State.

Gallivan told 2 On Your Side, "These are two pieces of feel-good legislation that really will have no impact on what's going on out on the streets right now."