'When it rains, it pours' | Crown Candy Kitchen property damaged twice in a month

Owner Andy Karandzieff says, "Hopefully, this is the last of it for now, but yeah, it's never a dull moment."
Author: Justina Coronel (KSDK)
Published: 11:35 PM EST February 8, 2020

ST. LOUIS — One of St. Louis' oldest and most popular restaurants has seen some unwanted guests lately.

Lately, they've been busier than ever.

Just about three weeks ago, two kids were on caught camera damaging Crown Candy and running away. Owner Andy Karandzieff says, "They destroyed the door, but didn't get in."

Police are still looking for the two suspects in the previous incident. They say they're just kids. One around 15 and the other around 10-years-old.

But Andy wasn't expecting someone else to barge in Saturday morning.

"My wife calls me and says, 'Why is there a car in the backyard of Crown?' As I ran out, there was literally a car all the way back there," Andy recalls.

On camera, you can see a car speeding through, hitting their fence, just inches away from the store. No word from police yet, but Andy says the two people inside seemed drunk.

No one was hurt.

"They had plowed through that fence, this fence, through our shed, hit the brick wall so hard it knocked bricks loose inside our garage. She never hit the brakes, she just plowed straight through," he says.

Over 100 years on this corner, Crown Candy has seen it all.

"You take the good with the bad," Andy tells 5 On Your Side.

But Andy says this car making its way all the through is top five craziest things he's seen.

He says, "Hopefully, this is the last of it for now, but yeah, it's never a dull moment." 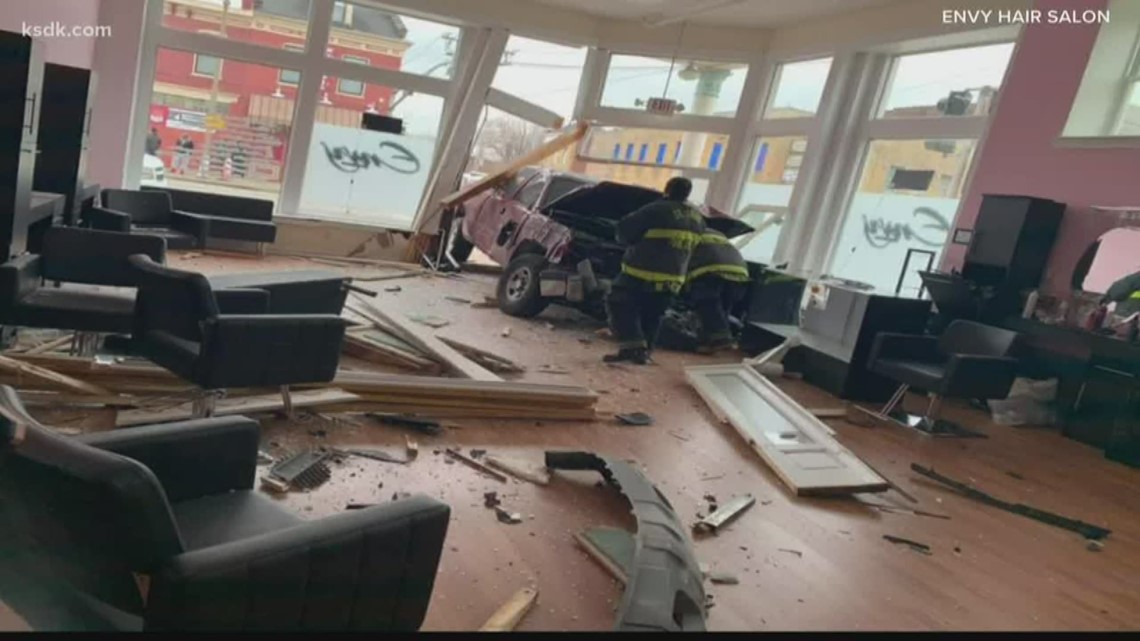 Vehicle crashes into St. Louis salon for the 3rd time in 4 years
ST. LOUIS - A St. Louis business owner said enough is enough after a third person drove into her store. The most recent incident happened this week. The windows are boarded up now at Envy Hair Studio on Martin Luther King Drive, but pictures of the aftermath show a mess of broken glass, wood and car parts inside the hair salon.

RELATED: 'I never knew I could pull dead weight' | Woman with no medical training saves lives after I-70 crash

RELATED: Homeless man honored for his heroic actions trying to save a woman's life

NYPD officer fighting for his life