Williams, who is a city councilman-at-large for New Orleans, has denied wrongdoing ahead of the indictment and blamed his tax preparer for the issues. 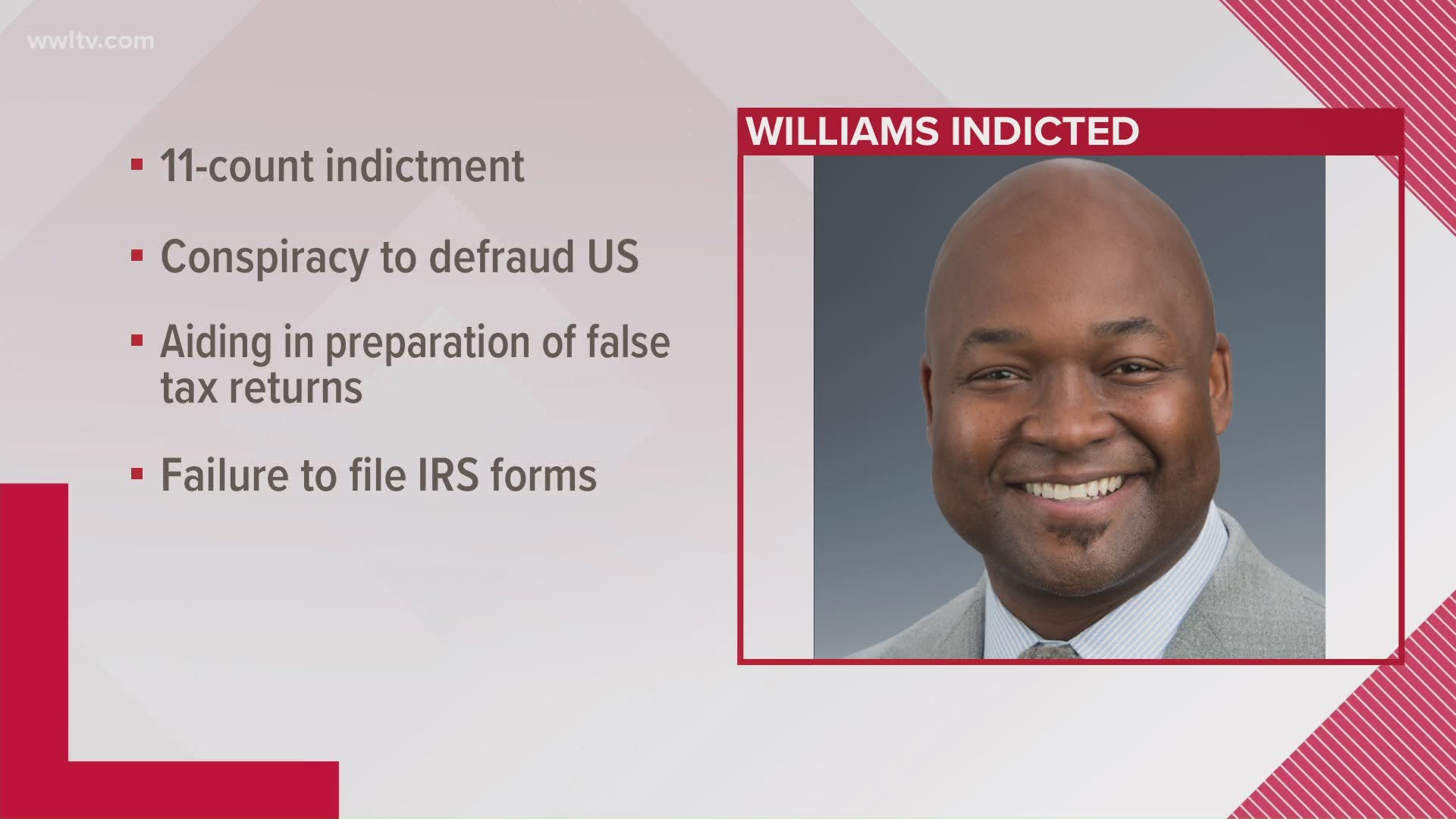 The indictment, obtained by WWL-TV, claims Williams owes more than $200,000 in taxes after falsifying documents and not reporting cash payments he received for legal services.

Prosecutors allege that William, as owner of the Jason Rogers Williams & Associates law firm, conspired with Nicole Burdett, an attorney with the firm who performed administrative functions to reduce Williams' tax liability from 2013-17.

According to the indictment, Williams directed Burdett to include his personal expenses with the law firm's finances when providing them to a tax preparer as a way to increase his own tax return.

The indictment says Burdett would then tell Williams' tax preparer to inflate the business expenses even more and wouldn't let him file until she and Williams were satisfied with the reduced tax liability number.

The indictment also alleged that Williams did not report $66,516 in cash payments received between June 2017 and August 2018.

If convicted, Williams and Burdett both face several years in prison.

Williams, who is a city councilman-at-large for the city of New Orleans, has denied wrongdoing ahead of the indictment and blamed his tax preparer for the improper documents.

A statement from Williams' attorney identified his tax preparer as Henry Timothy. According to attorney Billy Gibbens, Timothy had been misrepresenting himself as a CPA.

"Initially, Mr. Timothy stood by his work. He assured us that he – not Jason – made all tax decisions, that he handled Jason’s returns the same as all his clients’, and that there was nothing wrong with Jason’s taxes," Gibbens said. "However, after Mr. Timothy learned that he was under investigation by the IRS, he changed his tune and now claims that Jason 'pressured' him to take improper deductions. That is a lie."

Williams is running against Leon Cannizzaro for the Orleans Parish District Attorney’s Office this Fall.

Cannizzaro released a statement saying that the Orleans DA's office is not involved in federal investigations.

“If you are telling me this investigation has been in the works for two years, that obviously pre-dates the councilman announcing another run for District Attorney," Cannizzaro said. "So his trying to blame an accountant, me, anyone but himself for being under suspicion of some federal crime is nothing but a lame and desperate attempt to distract the media and public from the facts being investigated."

Read the full indictment below:

An attorney for Burdett released a statement saying he was "disappointed and baffled" at the decision to indict her.

"Nicole is innocent of these charges and looks forward to her day in court," said Michael Magner, who is representing Burdett in the case. He added that his client had done nothing except pass on the firm's books and records to Timothy.

He also repeated the claim that Timothy was misrepresenting himself as a CPA.

RELATED: Facebook to label all rule-breaking posts - even President Trump's

‎New Orleans News from WWL
‎Stay up-to-date with the latest news and weather in the New Orleans area on the all-new free WWL TV app. Our app features the latest breaking news that impacts you and your family, interactive weather and radar, and live video from our newscasts and local events. LOCAL & BREAKING NEWS * Receive r...