How domestic violence is prosecuted in Washington state 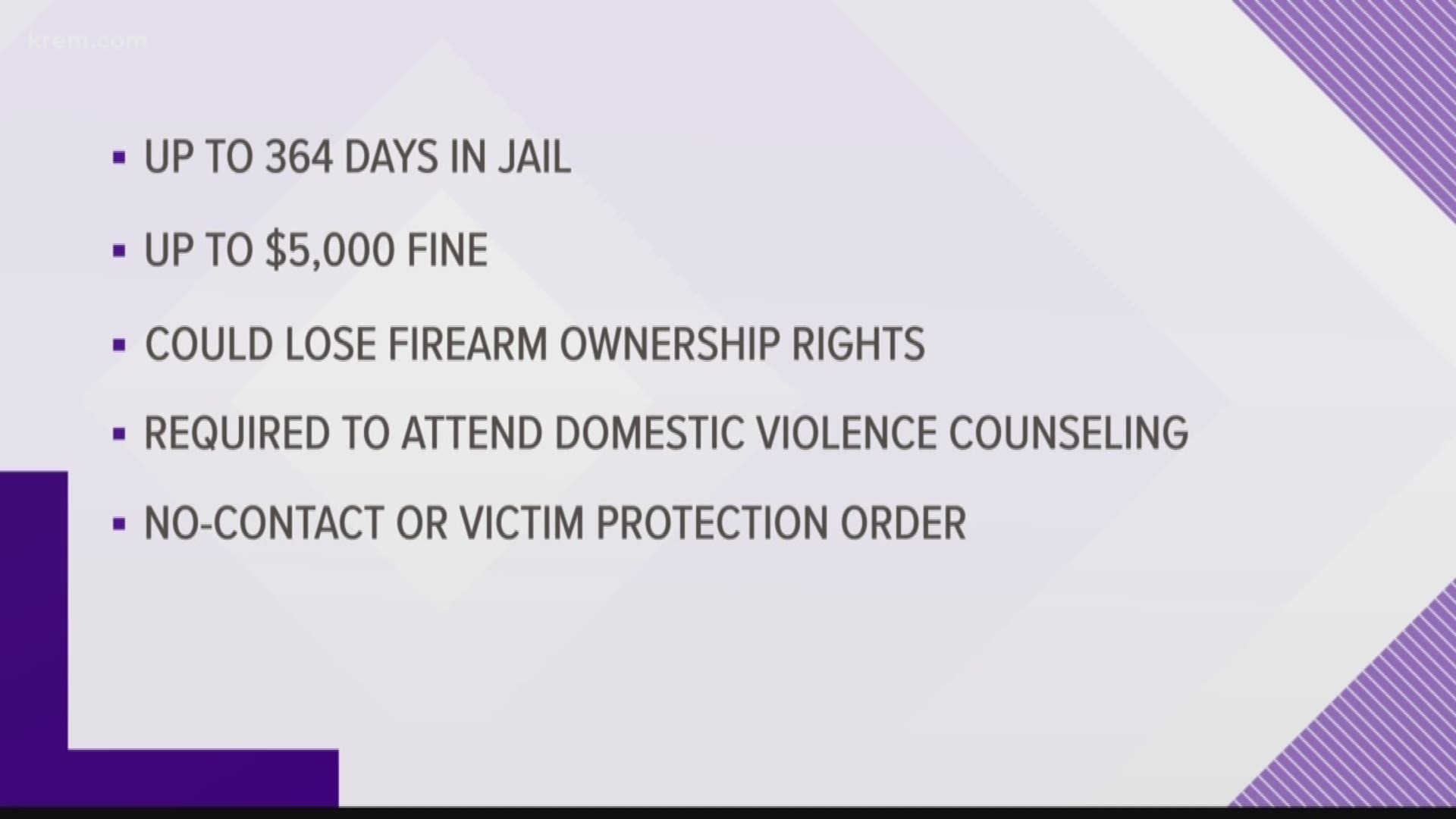 SPOKANE, Wash. — Domestic violence charges in Washington state are again in the spotlight after the Sunday arrest of former WSU and NFL quarterback Mark Rypien.

Rypien was arrested at Garland and Maple Street near Washington Trust Bank after receiving a call at 5:40 p.m., according to the Spokane Police Department.

Officers arrested Rypien on a suspicion of fourth-degree assault domestic violence, police said. He was booked into the Spokane County Jail at 6:28 p.m. on Sunday.

Rypien made his first appearance on Monday morning in Spokane Municipal Court, where he pleaded not guilty and was released on his own recognizance.

This has thrust the topic of domestic violence in Washington and how it is prosecuted back into the public light.

How domestic violence penalties are handled in Washington

Fourth-degree assault domestic violence in Washington is a gross misdemeanor, putting it below a felony in seriousness. This changes to a class C felony if the suspect in question has a previous criminal history including two or more domestic violence, harassment or assault charges in the last 10 years.

KREM could not find any previous criminal history for Rypien, so his charge wouldn’t be elevated to the level of a felony.

If Rypien, or anyone else charged with fourth-degree domestic violence, pleads guilty or is found guilty of the charge, they face up to 364 days in jail and a $5,000 fine, according to state law.

In addition to these penalties, the domestic violence aspect of the charge also means the suspect could lose their right to own a firearm in Washington. They could also be issued a no-contact or victim protection order and be required to take domestic violence courses or receive counseling.

Domestic violence is a more common crime than many may think, and Washington state is no exception to this.

In 2017, the Washington Association of Sheriffs and Police Chiefs (WASPC) released an annual report on crime numbers in the state. The report said that there were 54,294 domestic violence crimes committed in Washington in 2017, about 12,000 of which were violations of no contact or protection orders.

The WASPC report uses numbers from local agencies as well as the FBI's National Incident Based Reporting System, or NIBRS.

Washington saw 51 domestic violence murders in 2017, which was about 24 percent of the state’s murders for the year, according to the report. Five of these are listed as happening in Spokane County.

The Spokane Police Department lists even more injuries in the report, with over 1,300 injuries, including 13 broken bones, 44 internal injuries and 25 other major injuries. Twenty-two were reported as being unconscious.

This means that about 51 percent of assaults in 2017 were related to domestic violence.

In total, domestic violence made up 50.4 percent of crimes against people in 2017, which is the most recent stats available, according to the WASPC.

Crimes against people or the person include all crimes involving harm, the threat of harm or other actions against the will of the victim.

Washington saw 411,430 crimes in total in 2017, meaning that about 13 percent of all crimes were domestic violence-related in nature.

RELATED: How Spokane domestic violence victims can protect themselves after AMBER Alert attack

Editor's Note: The following video is a report on the arrest of Mark Rypien on suspicion of domestic violence in June 2019.