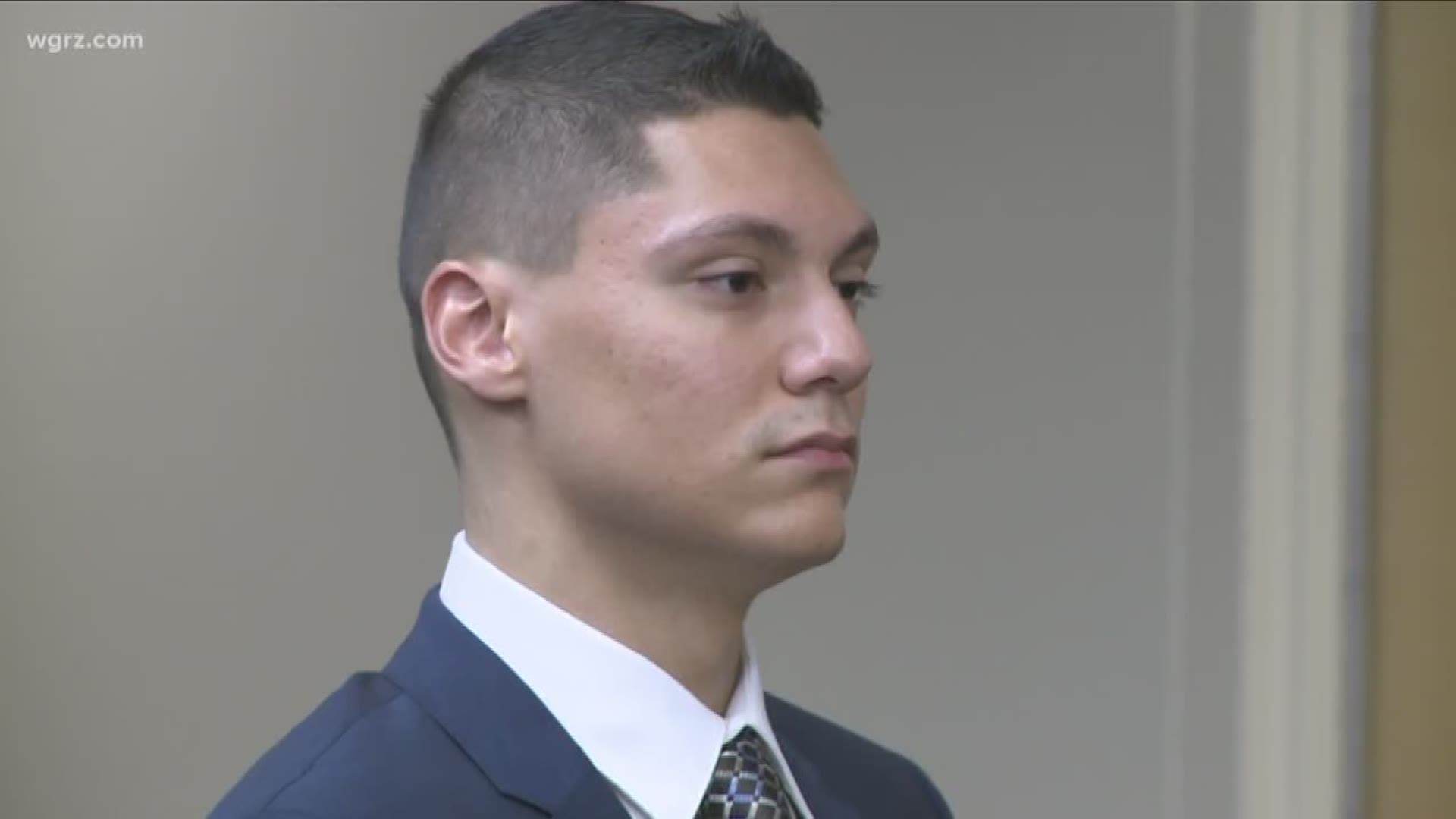 BUFFALO, N.Y. — A brief taste of freedom for Shane Casado is now over.

Here's what Judge Michalski had to say shortly before Casado was handcuffed, and taken out of court Friday:

"Based upon, Ms. Morgan, your application and the fact that I have now reviewed the grand jury minutes...the weight of the evidence is substantial against the defendant...I am going to revoke bail."

It was in late November when Casado was arrested for the shooting death of his former girlfriend, 22-year-old Rachael Wierzbicki.

MORE: Man charged with murder in girlfriend's death out on bail

He had been in jail for three months before posting bail last week.

The defense used his appearance at court Friday as proof that he wasn't a flight risk.

"Mr. Casado posted that bail and is standing next to me here today," said Justin Ginter with Lipsitz Green Scime Cambria LLP. "The purpose of bail is to make sure that Mr. Casado is in court."

But Erie County District Attorney John Flynn says there was a major hole in the defense's argument.

"They did not give the court the full picture," said Flynn during a press conference after the hearing. "Their argument asking for bail was two-fold...50% family ties, 50% employment ties, and like I say 50% of that argument was not exactly true."

Prior to the murder and his subsequent arrest, Casado worked as a manager of a group home for Community Services for Every1.

The defense argued Friday that Casado was on leave and the job was being held for him. They criticize DA Flynn for his public statements after the initial bail hearing, saying that resulted in the agency deciding not to hold the job for Casado.

In Morgan's argument Friday she called out the defense, saying a detective with their office confirmed what was said about Casado's employment at the initial bail hearing was a misrepresentation of the facts, "The arguments on March 6th, were incomplete at best and misleading."

Ginter countered with, "There was no condition set on Mr. Casado that he return to work. He's followed all those bail conditions and he's here in front of your honor today. There was no misrepresentation made by the defense."

"If the defendant wasn't going to go back to work after his release," responded Morgan, "arguing his employment status during a bail motion would have zero relevancy."

Ginter said the DA's office had the defense application for bail on March 1, well before March 6, and the prosecution should have raised concerns about before Casado's employment before the initial bail hearing, "Ms. Morgan had ample time, during that five-day period to respond in writing or do any investigation that she chose to do so."

Morgan responded saying it's irrelevant when the investigation took place, "Calling defense counsel out for misrepresentation sooner in time, doesn't absolve them from making them in the first place.">

Flynn was laughing when he responded to this in his press conference after the hearing, "What he's actually saying is that I should have assumed that they were lying in their papers. Based upon, assuming they were lying, went and double checked to make sure they weren't lying. If you think about that...it's ridiculous."

Paul Cambria, with Lipsitz Green Scime Cambria LLP, contacted 2 On Your Side about Flynn's comments. He was adamant that no false statements were made in the bail hearings or the bail application.

Shane Casado is innocent until proven guilty, but he faces up to life in prison if convicted of second-degree murder.

He will spend the next five months behind bars waiting for his trial to start. The judge confirmed today that it is now set for August.12.

Protest 'on hold' pending the outcome of bail revocation hearing